A message board for vintage t-shirt enthusiasts and connoisseurs of clothing aged to perfection.
http://www.defunkd.com/forum/

by LP180
Hey everyone! I am new to this forum and looking to get some insight on this shirt. I found it at Salvation Army for $1! I looked at some other shirts on eBay to get an idea of the value and then noticed that my shirt doesn't have the copyright like all of the other "real" tour shirts have. I'm not an expert on this stuff but everything about the shirt seemed to be legit from the 80's. The screen printing looked right, the shirt material felt right, the age and cracking of the image looked right, obviously not a modern reproduction made to look old but it doesn't have the copyright!

by FiftyFiftyMan
Hard to be certain, but I'd assume without the copyright tag that it's an old bootleg. However, the XS size may be a bigger detriment to selling it.

by timetraveltees
100% a modern reproduction, I see this tag all the time. The collar of the shirt is all wrong for true vintage. Plus the tag is way too elaborate for 1981, it's embroidered and has a new style design on it with a cutesy name. And it's made in El Salvador to boot, which would have been basically unheard of for 1981. Also I've never seen a true vintage shirt being tagged as XS, don't think that was very widely used, at least on t-shirts until the last 10-15 years maybe.

Here's the same tag on a Who reproduction with a 2005 copyright. 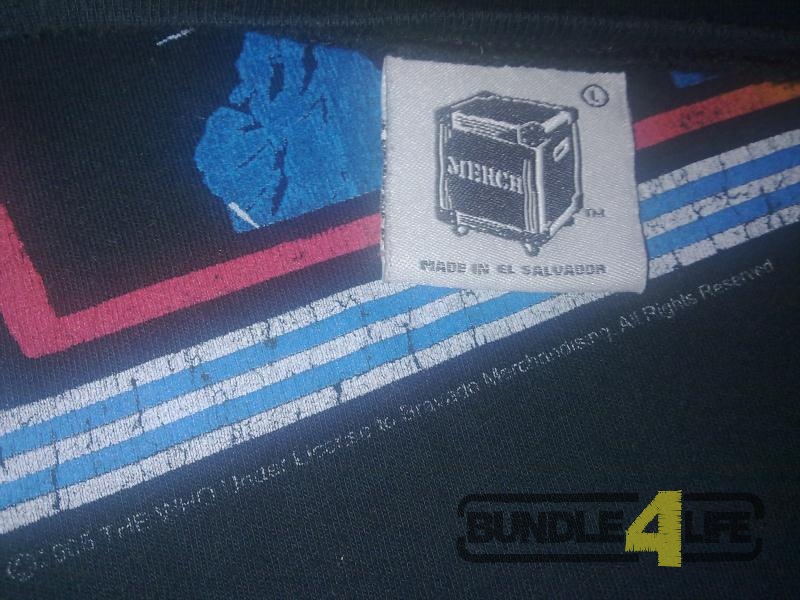 by FiftyFiftyMan
Obviously a recent shirt. I missed the El Salvador on the tag. I've never seen a Merch tag, but El Salvador is a dead giveaway. The only thing they were making in El Salvador in 1981 were violent military coups & insurrections.
All times are UTC-04:00
Page 1 of 1