Give us a history lesson on Showco rock t-shirts and let us know what sparked your interest in them.

The shirts were made by an enigma known only as “Denton” Tom. It would have been a great honor to have met the man that created this iconic piece of ephemera, but sadly he passed away. I’m sure he would be amused. He owned a small custom tee shirt shop called Denton Monogram in Denton, Texas.

“Denton” Tom had a nice relationship with Showco from the beginning. The tour would get organized and an order would be placed for the crew and band. Most of the time the band would choose the color scheme and artwork design. I’ve heard stories from crew members that a few bands got into major arguments over the shirt design more often than their actual stage, sound, and lighting rig setup.

I’ve interviewed a few musicians for the book that toured with Showco. I asked, “So why did you guys go with Showco over another production company?”Often the reply was,” they had the coolest shirt.” So I guess if a shirt can cause a band breakup or tour postponement, it’s got be interesting.

How many t-shirts do you own, and how did you obtain most of them?

Currently, I’m the caretaker of 126 Showco shirts, and I  hope it grows more.  I don’t like to think I own them.  I didn’t  put my time in on the road and the blood, sweat, and tears it takes to earn and own it.  These folks are my heroes, and with  that comes a deep respect and harmony to tell their story as these shirts do just that.

For example; by the mid 70’s Showco was growing so fast that most of the time they didn’t document the tours they produced.  Everything was hand written, typed, and firmed up with a handshake. Once talking (while) with crew members I came to find that tours they often worked get mixed together, some forgotten entirely.  That must have been a heavy time, man!  These shirts prove that the tour took place and Showco produced it.  The shirts were invaluable in my research once I started the book.  I couldn’t have done it without them.

I AM the curator of the largest and most comprehensive collection of this sort in the world.  Period.  Acquiring them…I have sources…you’ve got to.  Honestly, at this point I have been searching for these shirts for so long that people think of me when they have one they would like to part with.  That’s an honor, man.  They understand I would never resell these artifacts.  Their name and story will always be attached with them and all will be pictured in the book and credited to the individual.

I find it amazing where some of these shirts turn up,  from every corner of the world.  Actually, not long ago I found one right down the street from where I live.  A cool 1979 Bee Gee’s.  I’ve never seen anything like it before.  Unique and sharp!  It turns out this gentleman worked for a small Brooklyn sound company in the late 70’s.  They did a little side work with Showco when the big tours came to town.  An extra monitor, speaker, or power amp if needed.  At the end of the show he got hooked up with the shirt, a warm can of TAB soda, and half an eaten sandwich that they scrounged up from a backstage dressing room.

The real honor for me is when members of the Showco family kindly donate their shirts to the cause.  These shirts are extremely dear to me as I know these people personally and know how hard they worked while wearing them.

What’s the most you’ve sold (or bought) for a single tee for and which one was it?

I’ve made a concerted effort to never sell any items which I acquire.  I mean they’re hard enough to come by already right?  However, I have bought a few large collections and sometimes I end up with doubles.  I really scrutinize them to make sure there is no visible detail that stands out more so one over the other.  Otherwise I keep ‘em both.  A while back I did sell a double to a “vintage dealer” who was very passionate about this particular shirt.  He courted me for months.  “Jason man…it’s for my private collection never to leave my closet.”

You know the story.  Anyway, I negotiated a nice price, took care of him and guess what?  It’s online the next day with a ticket price of almost four times the original sale.  And that’s fine; just be honest with your intentions.

I have sold a double here and there, but I always roll the money into something I don’t have or want and that’s a nice treat.  When a super rare item comes up, look out man!  I go strong.  I will not be outbid or undersold.   A lot of heart goes into this, right?  I’m sure we all feel as passionate about the things we love and admire. 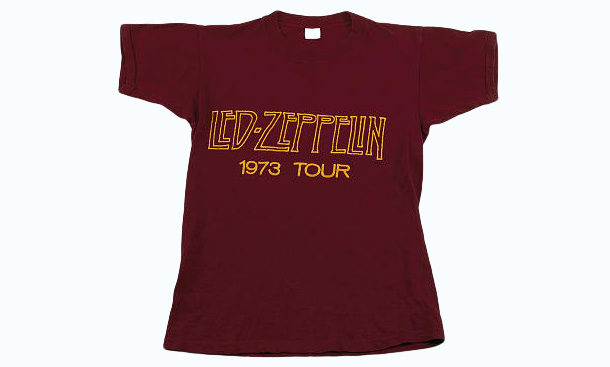 As a rule, I try to keep my business dealings private, but sometimes this is unavoidable.  The first is a Led Zeppelin 1973 tour Showco shirt.  I purchased it at Christie’s in New York for their Rock and Pop Memorabilia Auction in 2007.  This shirt was pictured all over the world to promote the sale in every music and fashion magazine.  Tons of national and international news papers (fact….I purchased every one of them).  Oh, it was on tv too…Good Morning America did a spot on it.

This was a first for Christie’s in their history.  They finally acknowledged a vintage rock tee shirt as an important piece of rock and pop ephemera. Congratulations vintage collectors!

The shirt was even selected as the cover shot for the auction catalogue (fact…I purchased twenty of them…(laughing) I’m fucking crazy).  You must realize there were hundreds of items going on the auction block that day that were quite rare…heavy John Lennon, Elvis, and Jimi Hendrix’s personal items, but this tiny maroon shirt with simple, undeniable logos worn at one time by a hard working roadie- made the grade.  Fuck yeah, right?  I invite everyone to do some research on this shirt so you can see what I mean.

Lately, everyone has been talking about that Zeppelin 1979 Knebworth shirt that went for $10,000.  Yeah…awesome…yeah, but I believe this one has a bit more flamboyancy as it caused a fashion movement, lots of excitement, press, and more than ten thousand smiles.  Oh…the closing price $1,625.00 worth every penny.

Check out what else Jason has to say in Part III.