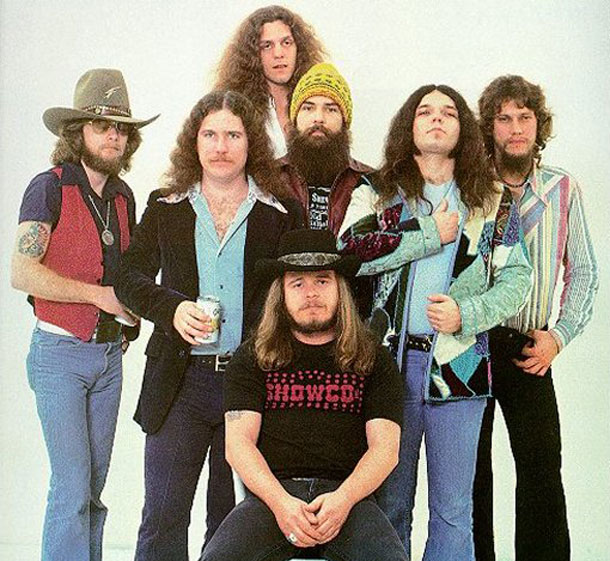 Tell us about the Ronnie Van Zant Showco shirt.

So you’d like to hear about Ronnie’s Showco shirt? I purchased it a few years back from Mr. Joe Barnes who was the second roadie hired in 1973 to work for the Lynyrd Skynyrd band. This was Ronnie’s favorite shirt. If you do a search you will see him wearing it on and off stage more than any other shirt he owned.

While on tour in 1976 the band had a rare day off. Dean Kilpatrick (Skynyrd’s late road manager) was sorting the band’s laundry in his room while Ronnie was propped up on the bed watching a football game. Dean was folding Ronnie’s shirt and Joe, who was also in the room, commented, “hey! I never got one of those Showco shirts.” Dean said, “hey man…this is Ronnie’s shirt”. Ronnie heard that, looked over, and said, “just give Joe the shirt.” Dean protested, but Ronnie’s generosity was unwavering. He would have kicked Dean’s ass if he made him miss one more minute of the game talking about a shirt. Wow…heavy…he really was that type of guy that would actually give you the shirt off his back.

It’s wild because after that transaction you’ll never see Ronnie pictured in that shirt again (I know…I’ve searched high and low). There’s more to the story, but I’d like to save it for the book.

It’s been under my care since 2009. I’ve touched it only a few times. I’ll never wash it or try it on (even though it looks like it just might fit me) out of respect for the man and his music. There’s no tag. Probably ripped out by Ronnie when he first got it. It’s got some holes and rips and the color has faded. That’s to be expected from a grueling 70’s rock tour. He had a huge presence on stage, but by no means a tall man in stature.

Examining the shirt you can see how it perfectly fit his frame. It still smells of a hard working front man. I’ve made a personal decision that I would like to donate this iconic item. Perhaps Freebird Live in Jacksonville Beach, Florida if they would have it. I also thought of the Rock n’ Roll Hall of Fame in Cleveland, Ohio.

It needs to be shared with the fans and not stashed away in a dark safe place like a drawer. In my opinion, this shirt is the most recognized visual in southern rock. If someone out there has got a solid plan they would like to present to me to make it happen- please get in touch. Note it’s not for sale. It never will be. My offer stands.

If one of your tees could talk,which one would tell the best story?  Do any have famous band DNA on them, ones that have survived altercations or crazy nights out?


I must say that 95% of my collection has intriguing or interesting stories attached with them.  You must realize that these shirts were there every night.  They were there for every show and witnessed everything.  No one was closer to the musicians than the Showco crew.  I have to say that it was tough extracting some stories from the alumni for the book. Their level of professionalism, loyalty, and standing as wallflowers about what was seen on tour still ring true today.

These folks truly love the music and have the utmost respect for the musicians and their craft. I do have shirts that were owned by band members, but I’d like to save some surprises for the book.  Your DNA question is cool so I’ll answer that.  I do have a shirt with rock star DNA on it.  It’s blood.  Blood from Jimmy McCulloch, the late Gibson SG slinging guitarist for Wings.

Legend has it Sir Paul McCartney, while on the 1976 Wings Over America Tour, caught the naughty guitarist in a backstage dressing room hoovering a line of tour no-no. Paul punched him square in the face.  Bloody and powder  covered Jimmy should have expected that this might be coming, if busted, from the man who penned the song “Listen to What the Man Said.”

What are your thoughts on the recent value of vintage rock tees on eBay? How have the prices changed over your time collecting? Do you see this as a good thing or a bad thing?

Oy vey!  My mom said that if you’ve got nothing nice to say, then don’t say it at all.  I started the trend in Showco.  No one knew.  I was under everyone’s radar for years and years. You never saw one because I made off like a thief in the middle of the night.  I created the mystique for better or worse and now it stands to haunt  me.

Check out Ebay.  There’s a few up there.  I own every one of them, but look at the prices… astronomical.  I will say this- for quite sometime Ebay and a few local shops here in NYC are ripe with the inflating price of vintage.  All these cats want to do is show off their wares between each other, put a super high price tag on it- with no real intention to sell.  They’re just pulling down their zippers.

Well you know what…you are all doing the wrong thing here and you will screw yourself eventually.  You’re all denying a kid of 14 a cool vintage shirt from his favorite band and that’s your growing market.  Not the 46 year old with a little money in the bank, (that’s even drying up-this country’s hurting) who wants to relive his Ronnie James Dio devil symbol, finger banging glory days.  The poor teenagers option now…they’ve gotta get a not so cool repro from the mall.  You should cater to the young girl that wants her vintage 70’s Black Sabbath tour shirt and not have it be several hundred dollars.

I’m happy to have moved on from you cats and not depend on your sourcing.  Mob Rules…even though you’ve assumed you’re on top of vintage mountain; you can’t be buried with it.  I might not be making friends here and that’s ok.  However, someone’s got to say it because we’re all thinking it.