We’re wrapping up our series of Showco interviews with Jason Sprinzen. His passion for the legend of Showco and for vintage swag in general is inspiring to collectors of all levels. Where else can you see 20+ Showco shirts in one picture or hear legendary stories from the road?

Major thanks to Jason for his cooperation and we look forward to reading his book for more stories about the heyday of rock ‘n’ roll. 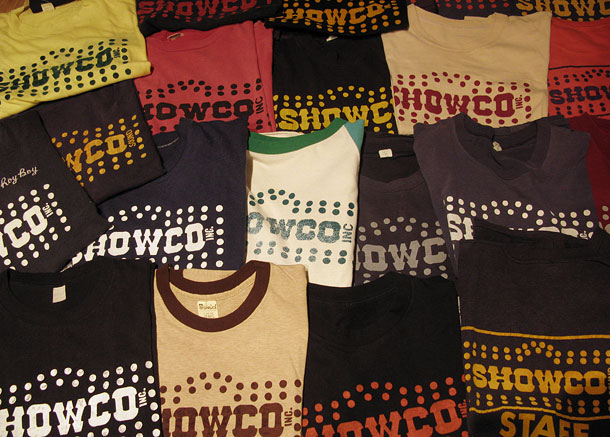 What’s the one tee you’ve never been able to get your hands on?

If I have my thoughts or lust set on anything, I usually get it.  I’m that passionate about vintage. I go to every extreme and never fuck around once my mind is focused. I’ve refined my collection so that now I’m not all over the board. Sure, I’ll see a great Zep, Leon Russell, or Carpenters shirt here and there. I tend to drive myself crazy, but my sensibility always wins at the end of the day.

Ok I’ll put this out there and whoever helps me will be hooked up in a MAJOR way. I’ve been on a mission to find the elusive 1978 Alice Cooper tour Showco shirt. It’s black and pink with a very cool motif on the back. I need it for the book! I want it! I must have it!  HELP!

Tell us about the one that got away?

Man…It was a 1980 Led Zeppelin tour jersey…black with white 3/4 sleeves printed front and back with cool Zeppelin motifs, search lights, the four symbols, the whole deal….just beautiful…and it was stamped “cancelled”.  I guess they made these shirts in preparation for the tour and sadly Bonzo passed away.  They had to sell em’ somehow right?

If I can recall I purchased mine in 1983-84 at the old and now gone Long Island Commack arena turned flea market in the early 80’s. Legend has it that Blue Oyster Cult, Zebra, Leo “you make me feel like dancing” Sayer and Lynyrd Skynyrd played there in the 70’s. The old dressing rooms were still there inside. It was possible to sneak away from mom while she was shopping for hair clips, gaudy 14K gold jewelry, and crock pots. Then meet a sweet chicky and make out with em’.  I always imagined I was a conquering rock star in town for one night and she was my road mama in those dusty and long forgotten dressing rooms.

Anyway…I sold it in 1985. I was fifteen at the time. It went to my friend “Fat” Rob in the shady alleyway behind our local 7-11 for a turquoise blue Slurpee, a Reggie Jackson candy bar, two dollars worth of games for the Asteroids machine, and a nickel bag of Panama Red. Honestly…it looked and smelled like oregano, but “Fat” Rob insisted it was the real deal. His connection down the street Timmy “the Stain” (he earned that title because this kid was absolutely filthy) said that it was slid to him from a machete wielding South American drug smuggler who was the Big Daddy-O. I always got excited, here I was 15 years old with these international drug connections.

To this day I still think “Fat” Rob got the better deal.

When my Led Zeppelin tribute band Electric Magic (plug) books a show, my drummer Marty always asks me the same question. He knows how to win my heart with an ice cold Miller High Life. It usually goes like this……

“Hey brother…listen man…oh here’s your icy Miller.” “ Enjoy it! Cheers!” “Jason… we got a show booked I’d like to know if I could wear that ’77 black and blue Led Zeppelin Showco on stage man?” “ I really wanna channel Bonzo at this gig and blow everyone the fuck away!”  Shit…how can you say no to that?

I haven’t been approached by anyone to rent my shirts for any type of media. I’ve always been a man of mystery with this caboodle. My dream is once the book is completed I’m going to begin work on a screenplay for a movie version of the story. I’ve already decided in my warped mind that all of the actors will wear original shirts from my collection to give the movie an authentic feel and period precision look. That point will not be negotiable in the contract. If there’s someone out there who’s real and believes that this is a great idea for a script, drop me a line because I’ve got the story. I firmly believe that this piece of history would make for a great film.

How do you care for your t-shirts? Stains? Seamstress?

The shirts are all folded neatly and put into boxes. It’s the best I can do for the moment.  My place is not that big and I have limited space. I’d like to re-organize it better. My dream is to have them hanging up and grouped together by year or artist. In my current situation it makes it difficult to find a particular shirt. If I want to review it for my research or put it on and feel it’s vibe to get inspiration while writing, like I am now.

These were work shirts first and foremost and as I mentioned earlier- I’m just a caretaker.  I don’t believe in altering them in anyway.  If there’s stains on em’- I leave it.  If there’s rips, tears, and holes from a joint or cigarette burn that stays too.

There’s a lot of history with these shirts and there’s no way I’d Oxy wash out a mustard or relish stain from a roadie pilfered backstage sandwich at the L.A. Forum in 1977.  That could have been a piece of Jimmy Page’s sandwich!  Actually, I don’t think sweaty, wafer thin Jimmy even ate once on that mammoth ’77 tour while wearing that white silk, opium poppy, stage outfit.  Questionable?

My beautiful girlfriend Heather is the only one I trust if a shirt is in dire condition and needs some love to bring it back to its former glory. She’s unbelievable with a needle and thread man. You’d never know. I had a very jacked up 1979 Thin Lizzy Showco that was just falling apart. She came to the rescue, saved the day, and kept all of the original integrity. Amazing.  That shirt wound up being one of her favorites. It’s tiny and fits her so well. When we’re getting ready to go out and slide around town and she’s got on her jeans, boots, and a Showco I just fall in love all over again.

What other stuff do you collect?

Everything I collect has got a place for it in the book. Backstage passes, swag by other sound and lighting companies, original tour itineraries, stage blue prints, ticket stubs, concert programs, drug paraphernalia, original microphones that were used onstage and a whole lot more. I even own a Shure mic which was used by “the golden god” Robert Plant!  “You need coolin’, baby I’m not foolin’!”

I’ve amassed hundreds of pieces of ephemera to compliment the story. Anything Showco, tour, or period related. The book is going to be a beautiful visual as well as being informative and entertaining.

Tell us more about your upcoming book, can we sneak a peek at some of it?

Thank you for asking me about the book. I’ve been working on it for over nine years.  It’s a massive undertaking. Nothing like it before has ever been attempted.  Spanning the years of 1965 thru 1981 narrates the story of three long haired cowboys from Dallas, Texas who created a multi million dollar industry during one of the most heady times in our country’s history.

Enter SHOWCO, the unheralded Dallas company that invented the technologies to transform a rock show into a religious experience. I have hundreds of hours of interviews and never seen before photos from the Showco family and the artists they produced to tell the story right.  So, you think you know rock history?  Do you know all the old chestnuts? Led Zep’s mud shark story or Stevie Nicks having blown cocaine up her ass. Forget it man. This book is going to change all of that. Those stories mostly came from rock journalists assigned to a tour. They would write anything to sell that Creem magazine.

Now, for the first time you’ll get a backstage pass (without giving anyone head) to peek behind the curtain and really know what  it was like to be on a rock tour in the age of guitar gods. It’s a story of innovation, power, drugs, deceit, friendship, lawsuits and rock n’ roll.  There’s even a mad scientist, warrior princess, fair maiden and the best bands of the era thrown in.

I don’t have a release date yet. It becomes difficult when you’re funding the entire project yourself and for the most part working independently. If someone would like to get involved and you’re for real or know of a publishing house that might have interest, please drop me a line. I promise it will be the coolest project you have ever been involved with.  Right on!

Once again, my gratitude goes out to Defunkd for this interview.  It’s always flattering to share your passion with others. And to my beautiful babe Heather for the “you’re too smart for your own good” edit. 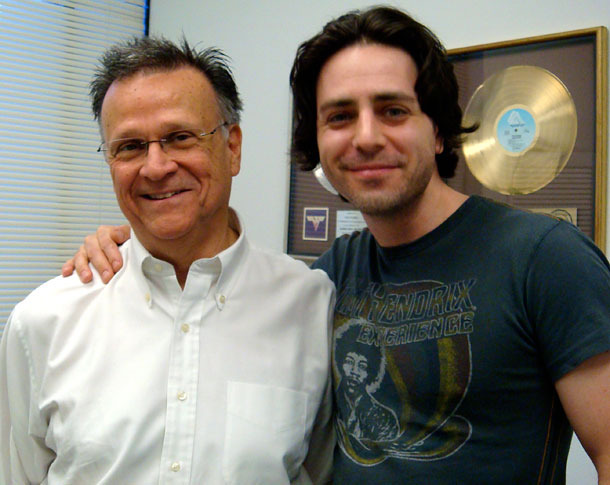 Jason Sprinzen with Jack Calmes Showco Founder and Visionary in 2008. 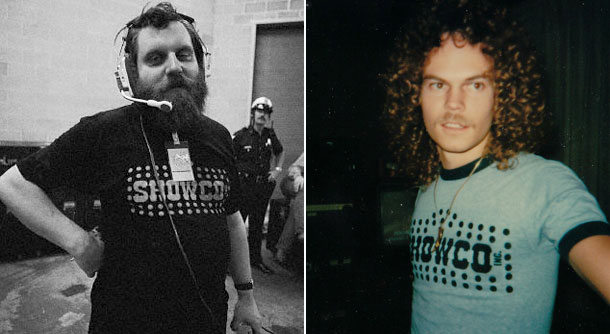 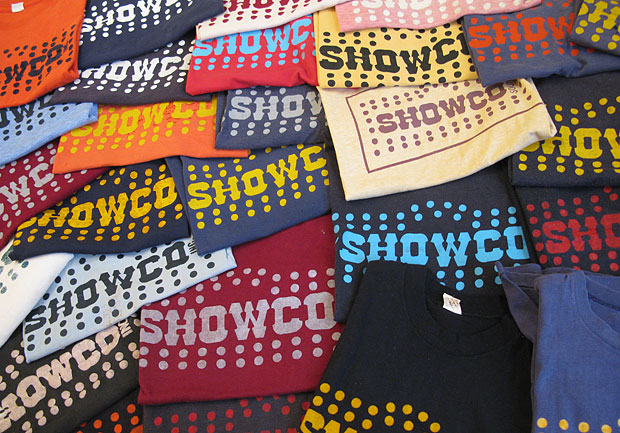