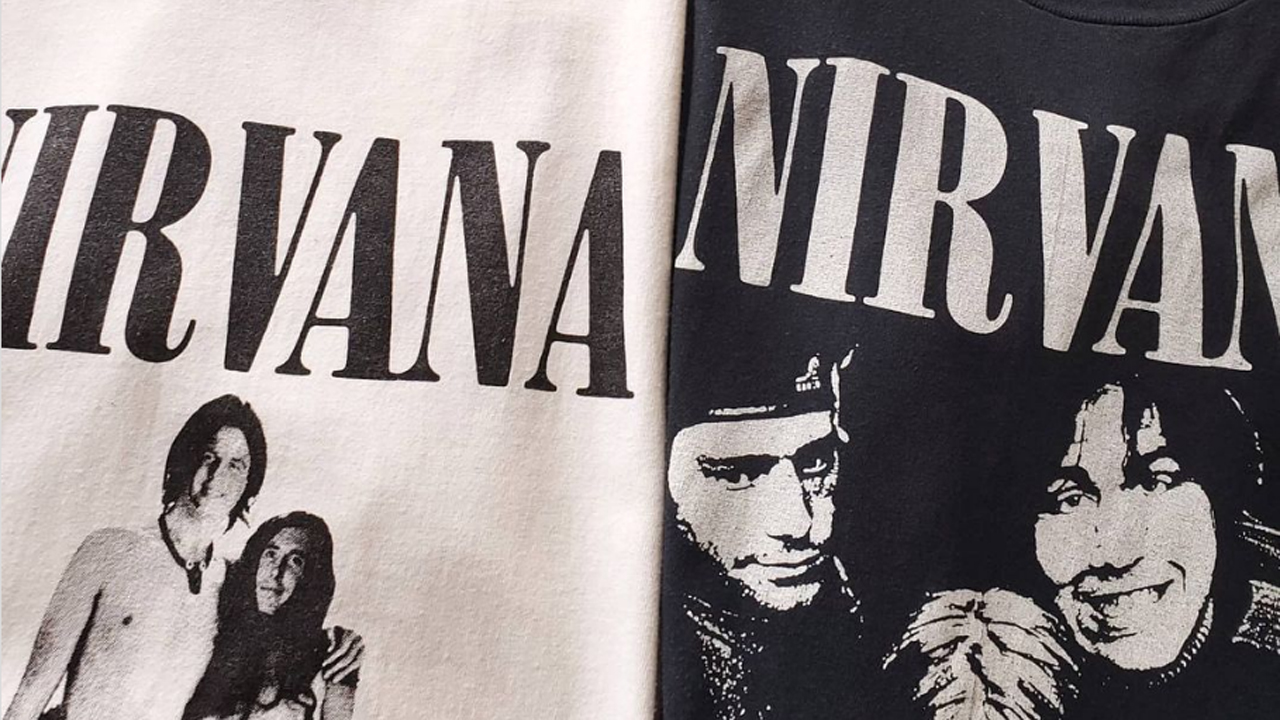 When I first started picking and thrifting in 2004 I passed over a lot of Nirvana tees because they seemed like a dime a dozen. I estimated it would take at least another decade before the shirts really had any value.

By 2010, several Nirvana tees had already made our list of the highest fetching t-shirt auctions. The top two Sub-Pop shirts above, “Two Virgins” and Kurt, Krist, and Chad each sold for a cool $1000 each.

What are the Most Expensive Vintage Nirvana T-Shirts?

To figure this out we thoroughly scanned through historic eBay and auction house sales records as well as consulted with a Nirvana t-shirt expert. 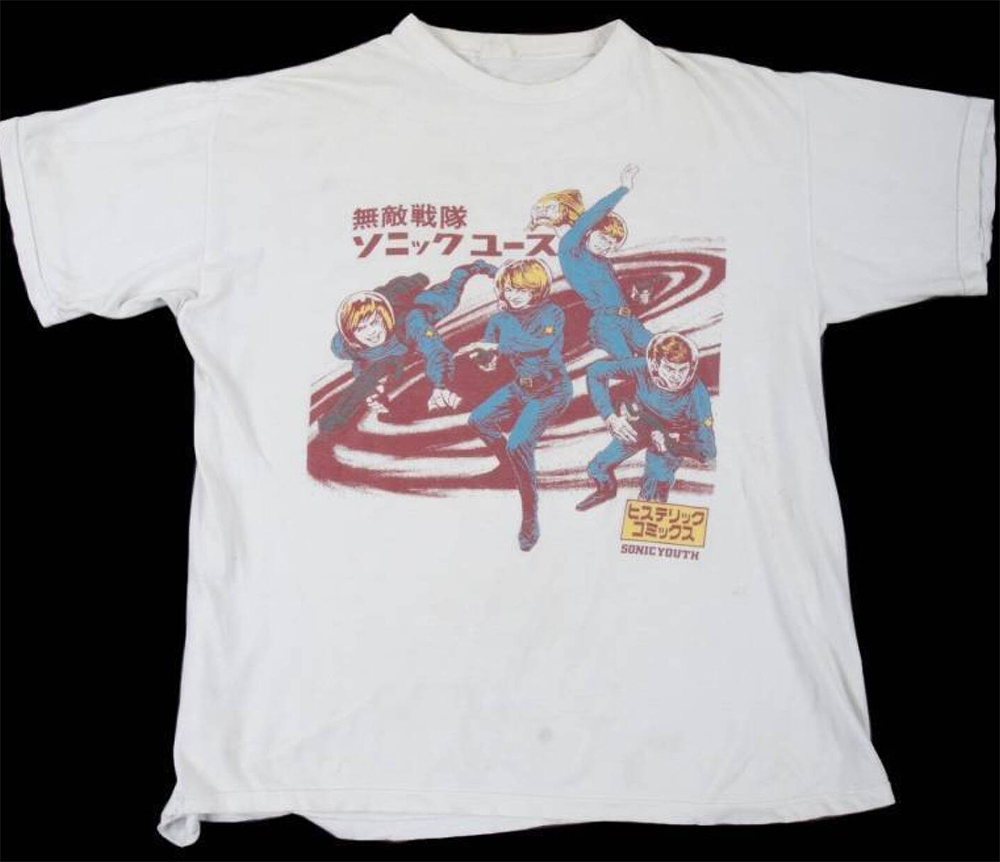 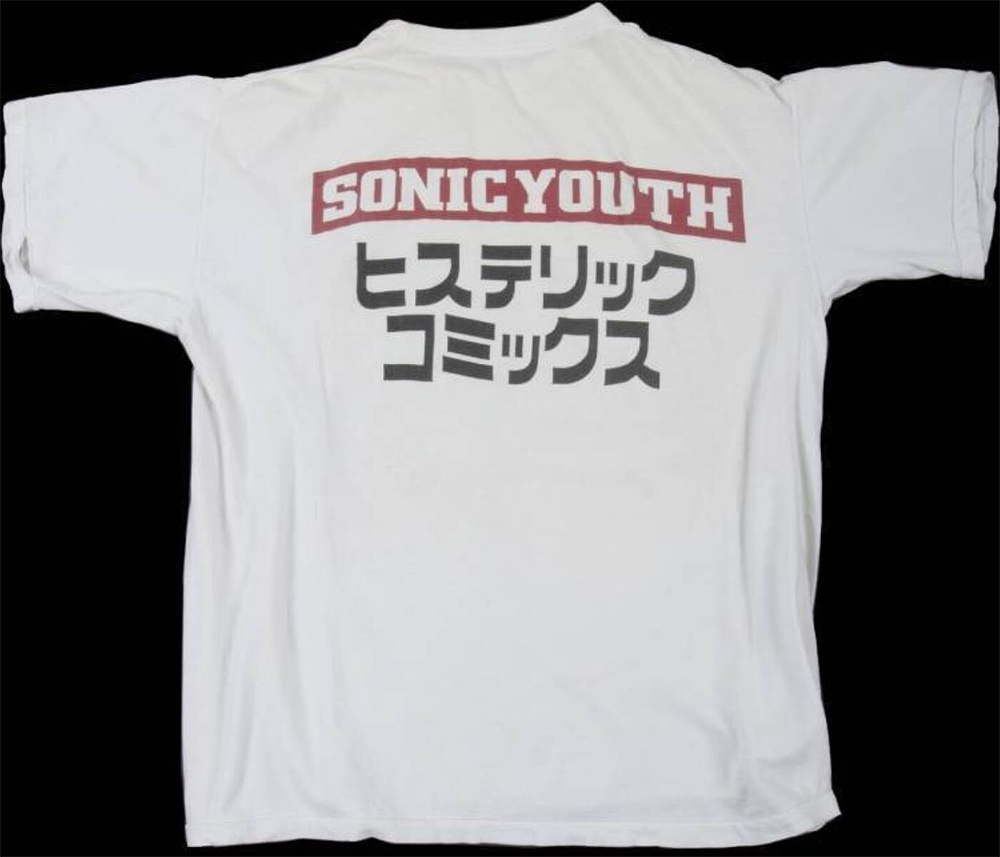 Ok, so this is technically not a Nirvana t-shirt, but it was worn by Kurt Cobain on stage during a Nirvana performance at Terminal 1 in Munich, Germany, on March 1, 1994. This sold from a respected auction house back in 2014 and didn’t make as big of a news splash as it should have. The t-shirt was accompanied by a couple of letters that vouch for its unique provenance. The promoter of the show explained that Cobain had left the tee in his dressing room and he attempted to return it but Kurt had no interest in taking it back. I was recently in touch with the auction house and confirmed with them that the sale transpired, so to our knowledge, this is the most expensive performer-worn, stage-worn t-shirt given it trumps the recent Pigpen shirt that fetched $21,420. 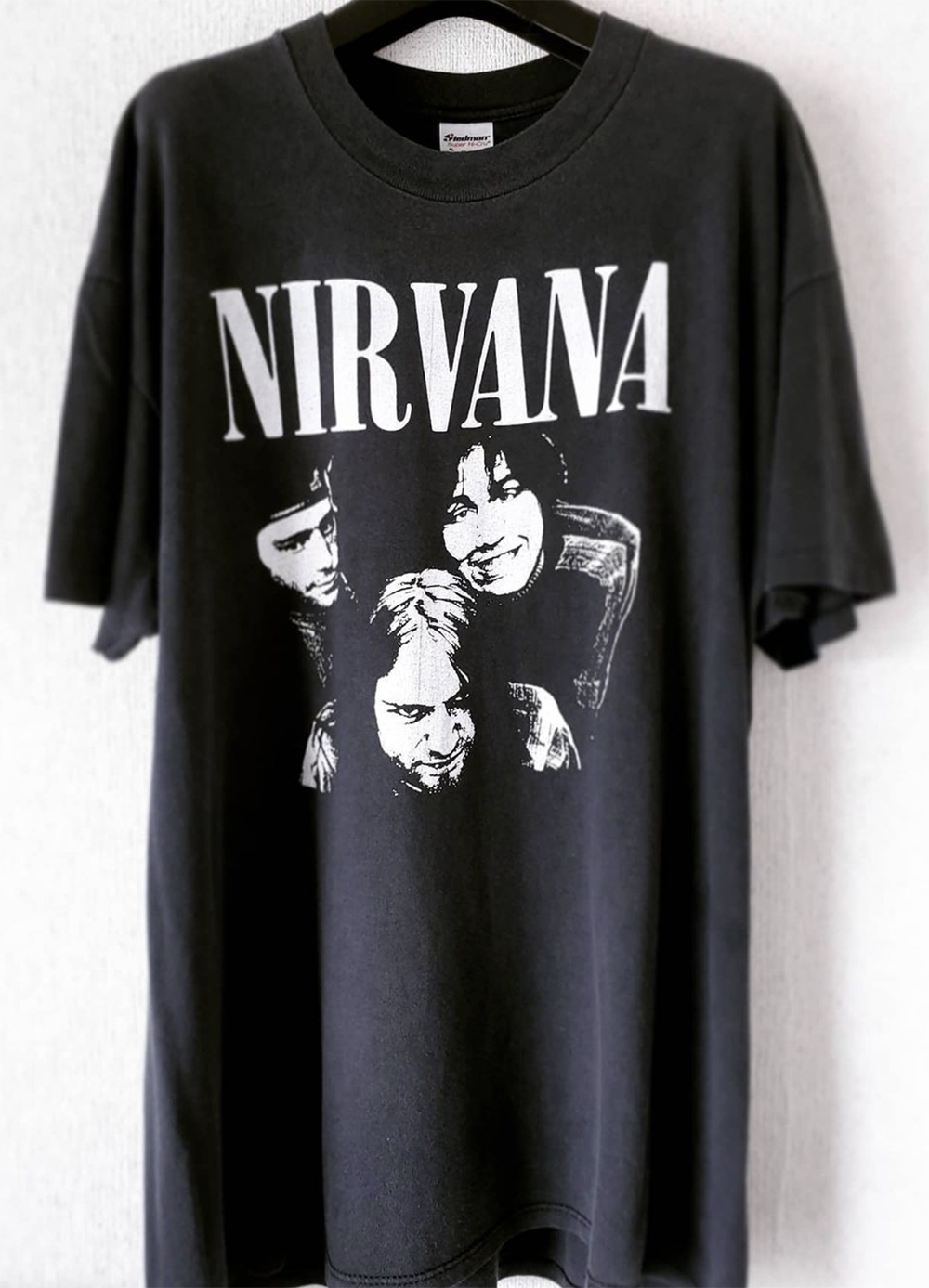 This tee was recently purchased by a collector in Japan. Based on this tee’s value in 2010, that’s a 750% increase. Not a bad return.

The collector, Hikki, who showcases his collection via the IG account rannataraoaoa, told Bidstitch that he’s spent in excess of $60,000 on vintage Nirvana tees. If you scroll through his posts, you’re bound to discover a few prints you’ve never seen before, and given the sheer quantity he owns – $60k doesn’t seem far-fetched. 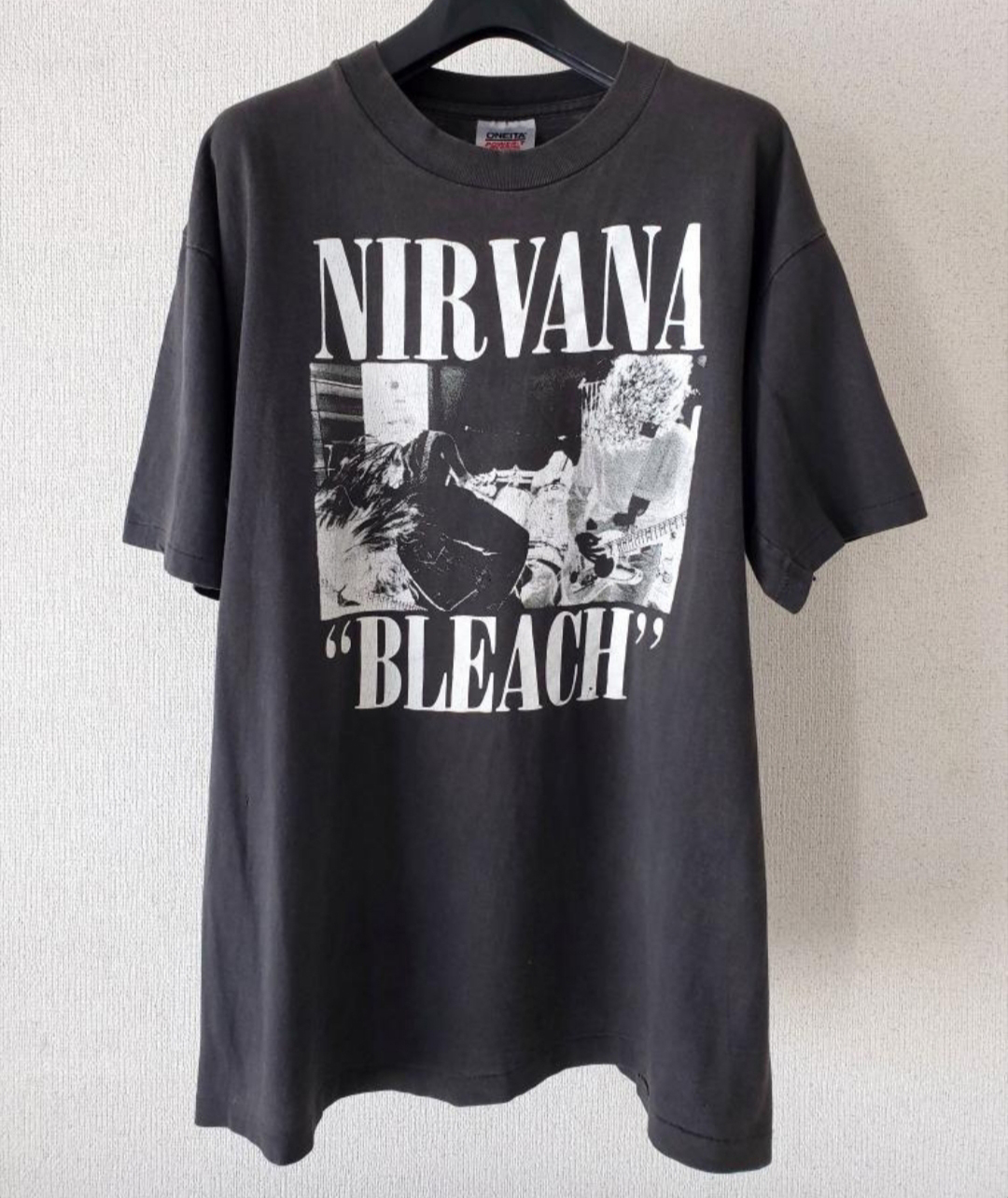 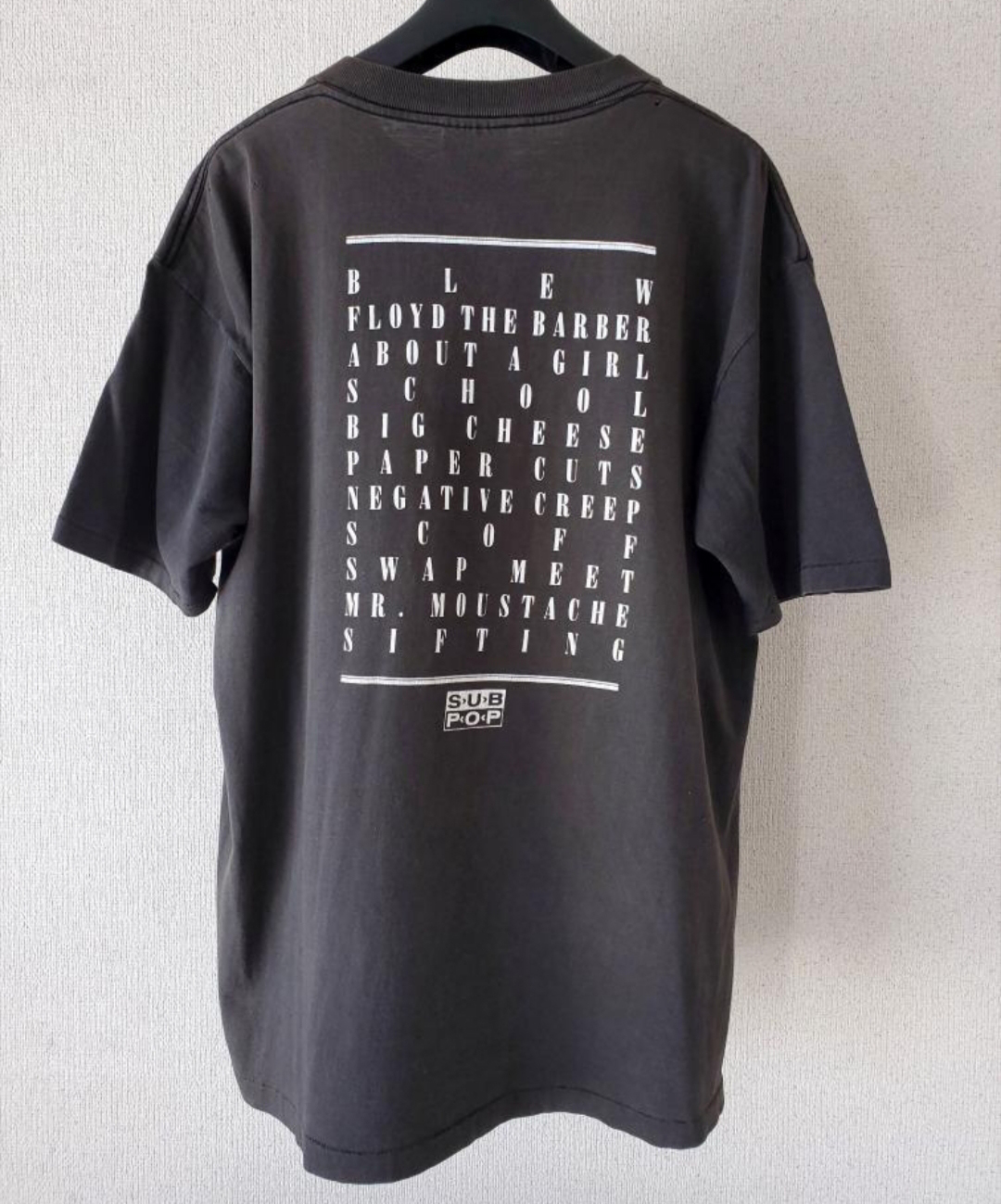 “Bleach shirts are rarely on the market. This shirt is XL with Oneita tag. It’s the perfect condition,” Hikki explained. 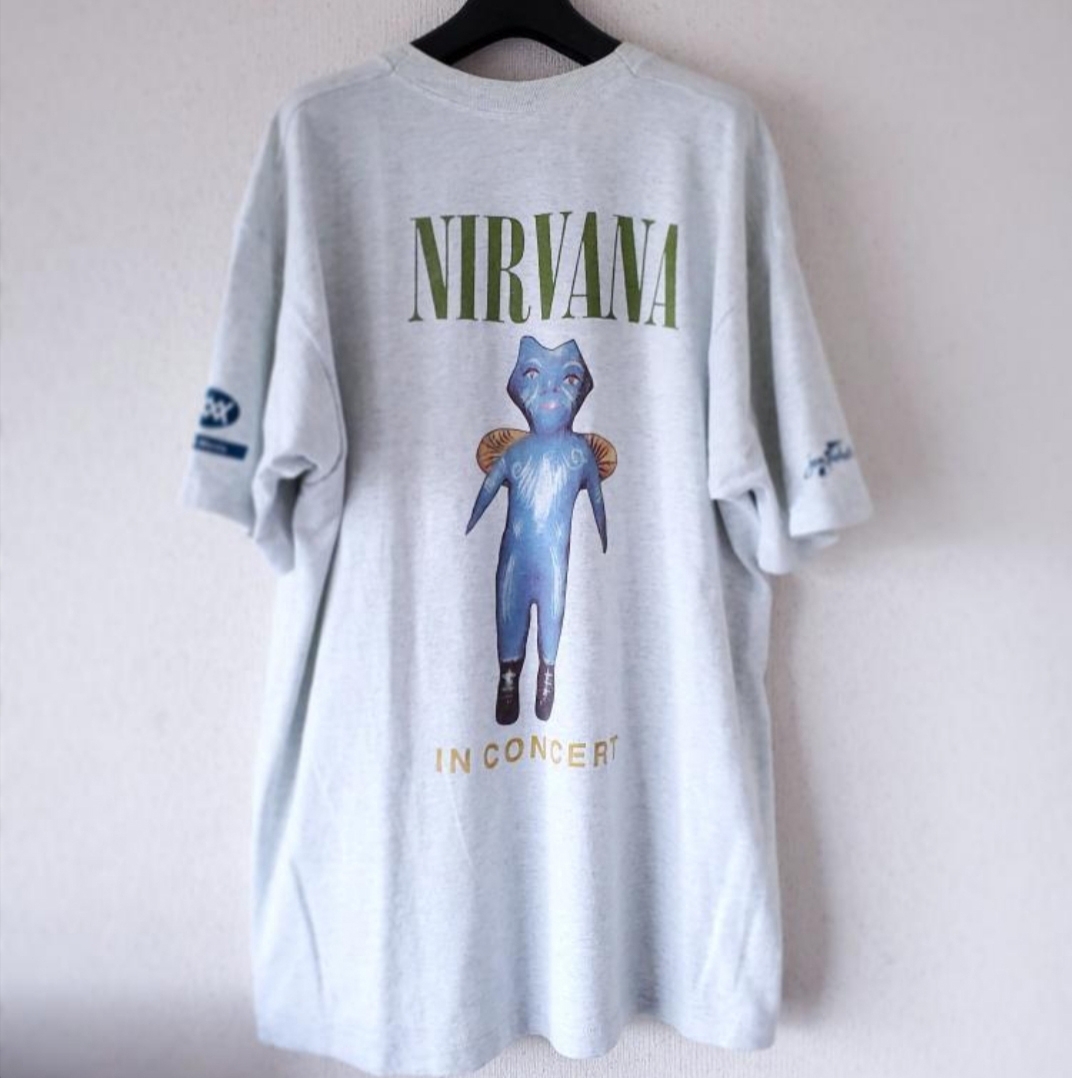 This print was made exclusively for crew members on what ended up being Nirvana’s final tour. It was meant to commemorate and celebrate the sold-out shows. Provenance-wise, one surfaced on eBay years ago compliments of a seller who said it came from Cobain’s bodyguard. It was put on sale by Stormcrow-Vintage, the same GOAT who sold the Led Zeppelin t-shirt for $10,000. We’ve been unable to confirm if it sold for $7k, but Hikki suspects it would bring in a similar price in today’s market, though he still isn’t certain on the origin of the figure featured on the shirt. “Do you know anything about the character on this t-shirt?” he asked. If you do, please get in touch with him.

Another one of these tees (below) sold for $3600 on eBay and the seller described the shirt as being from an Aragon Ballroom show in Chicago in 1993.

BTW, this is likely the most expensive mullet t-shirt in existence, given the front features a small chest print, and even a pocket. 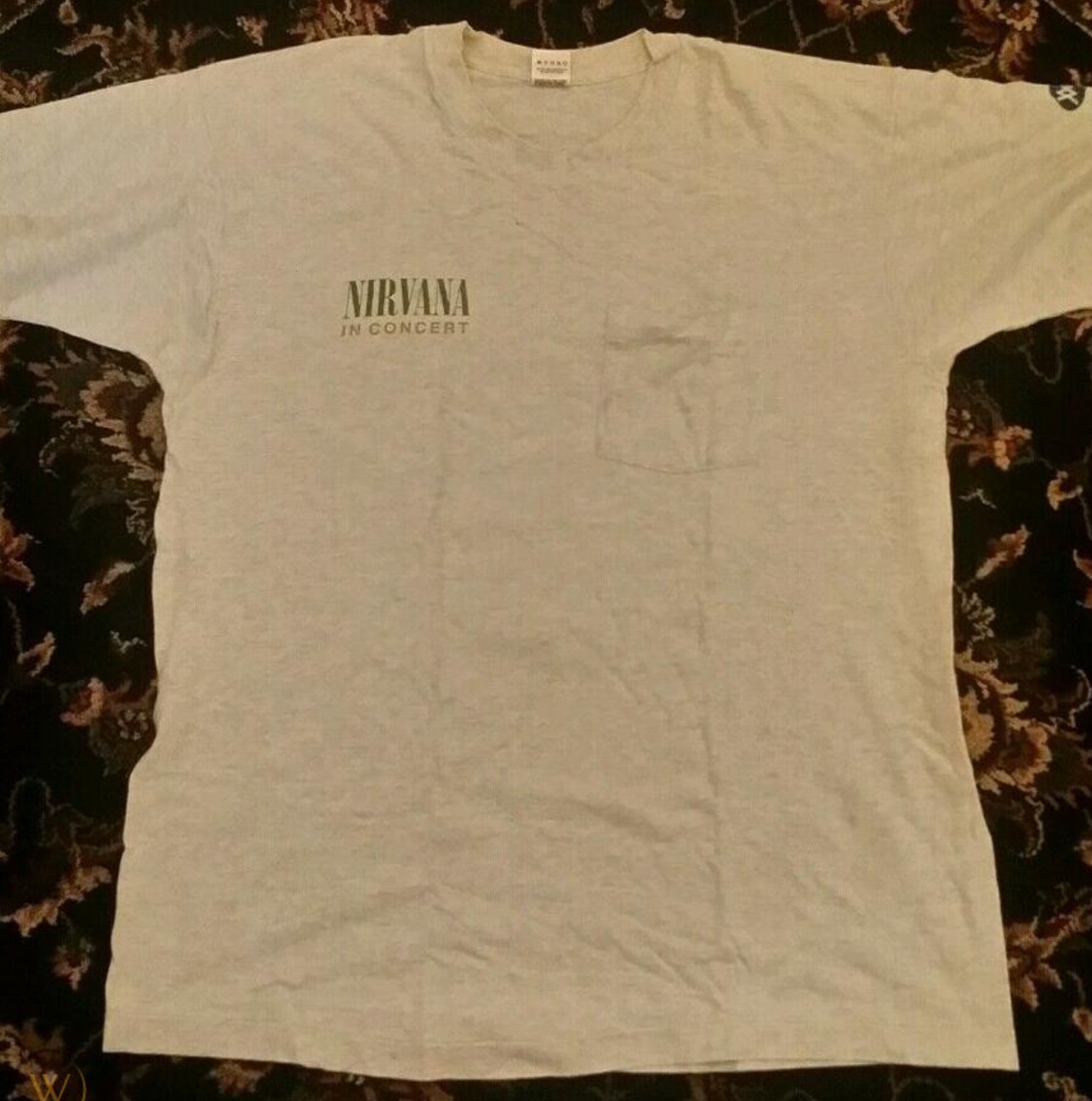 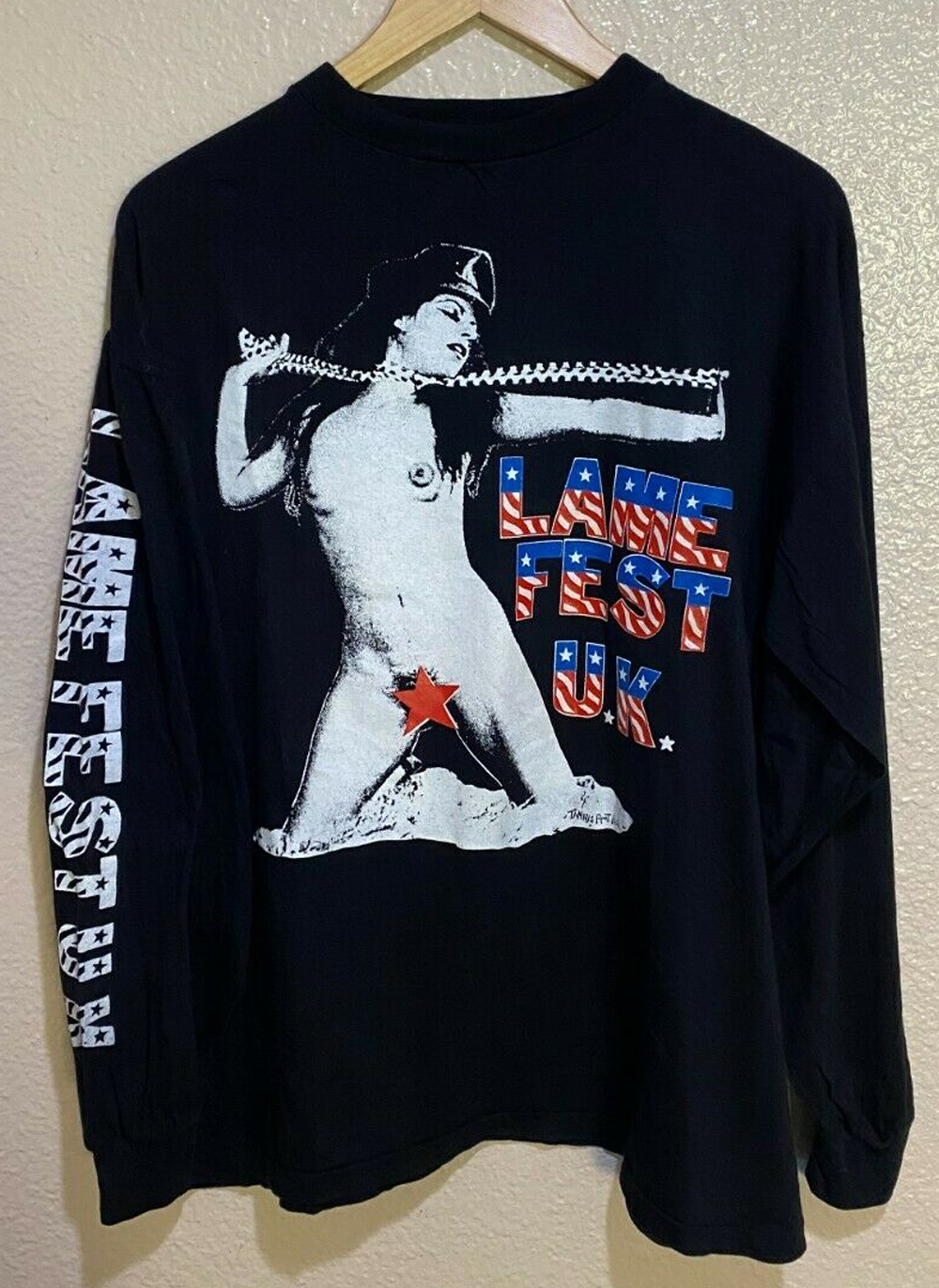 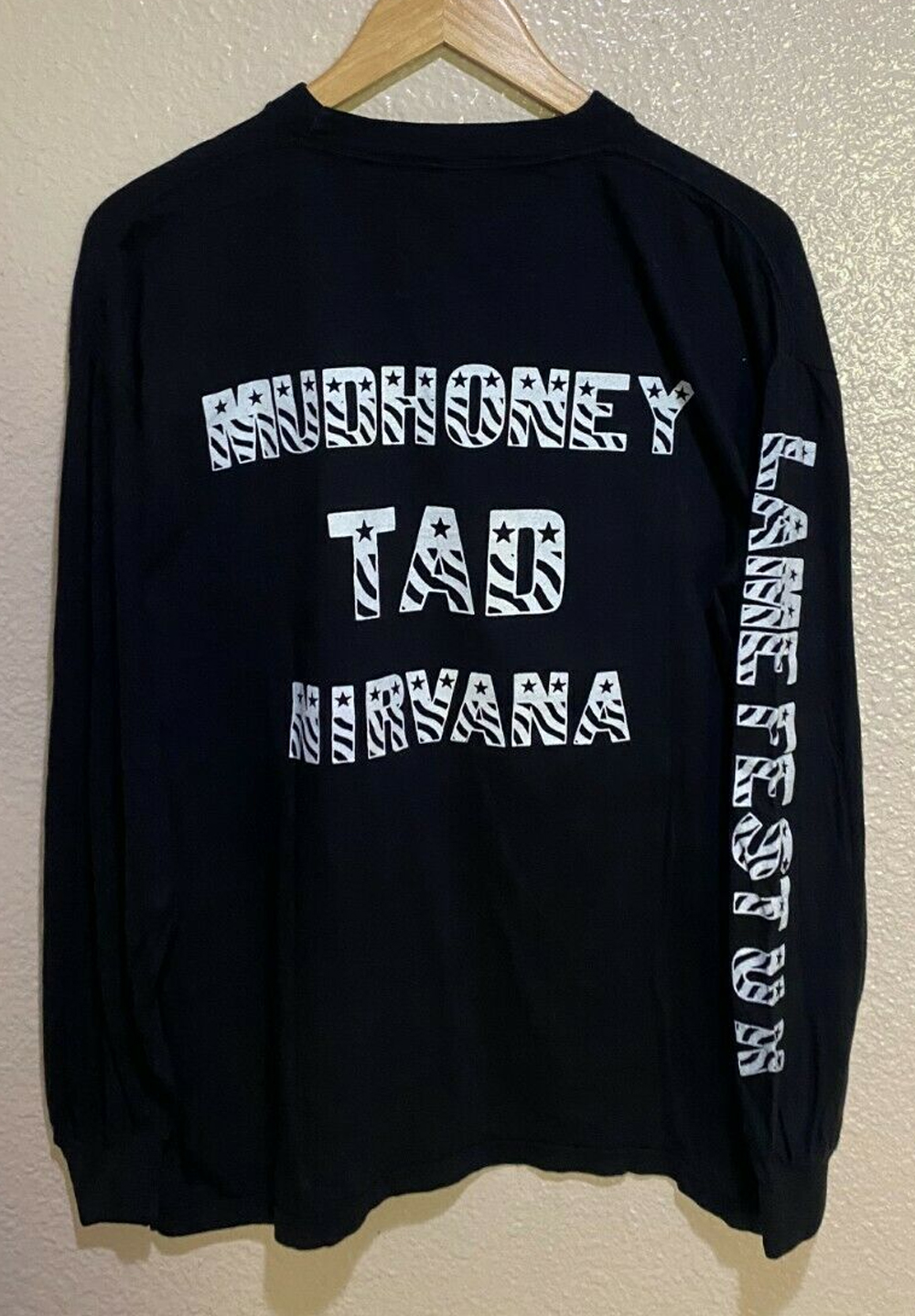 Sure, this isn’t strictly a Nirvana tee given it’s for a festival and includes Mudhoney and Tad, but we think it still qualifies. It caused a bidding frenzy on eBay and closed out at over $4k USD. According to the listing it was “Only sold at 1 show at a London Gig in Astoria 12/3/1989,” and as to its provenance, “Belonged to the former manager of the band Mudhoney.” 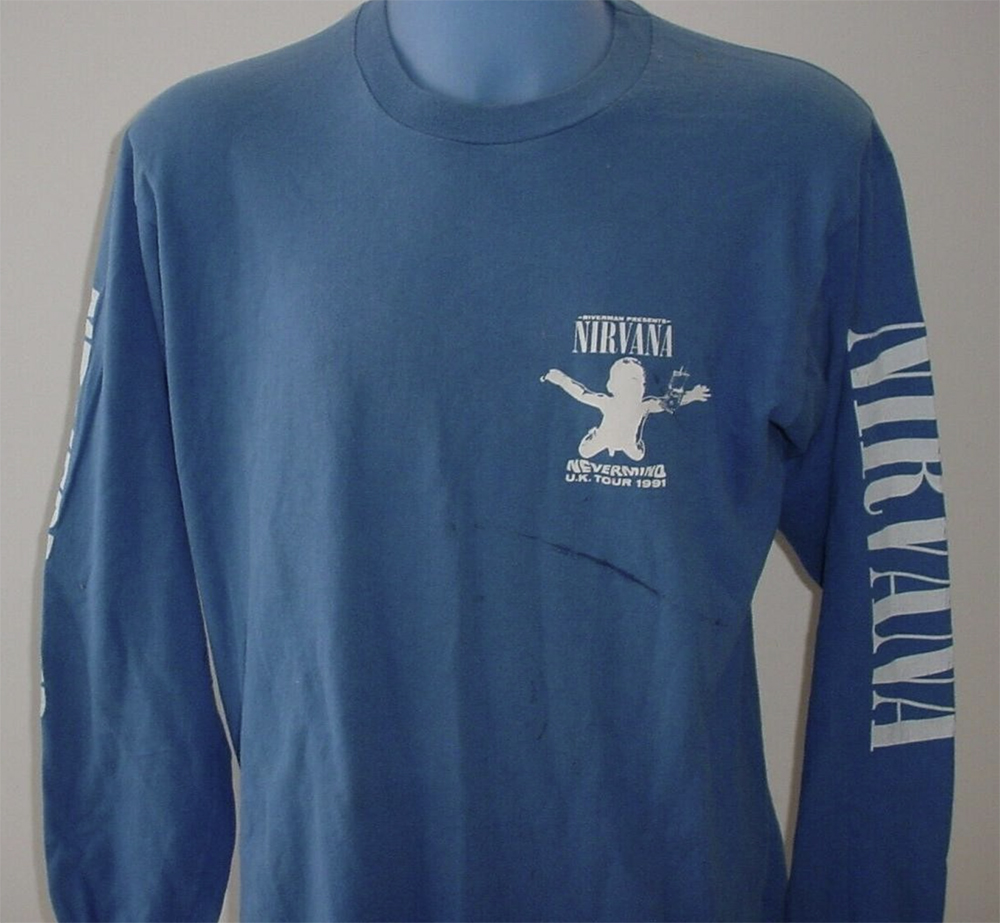 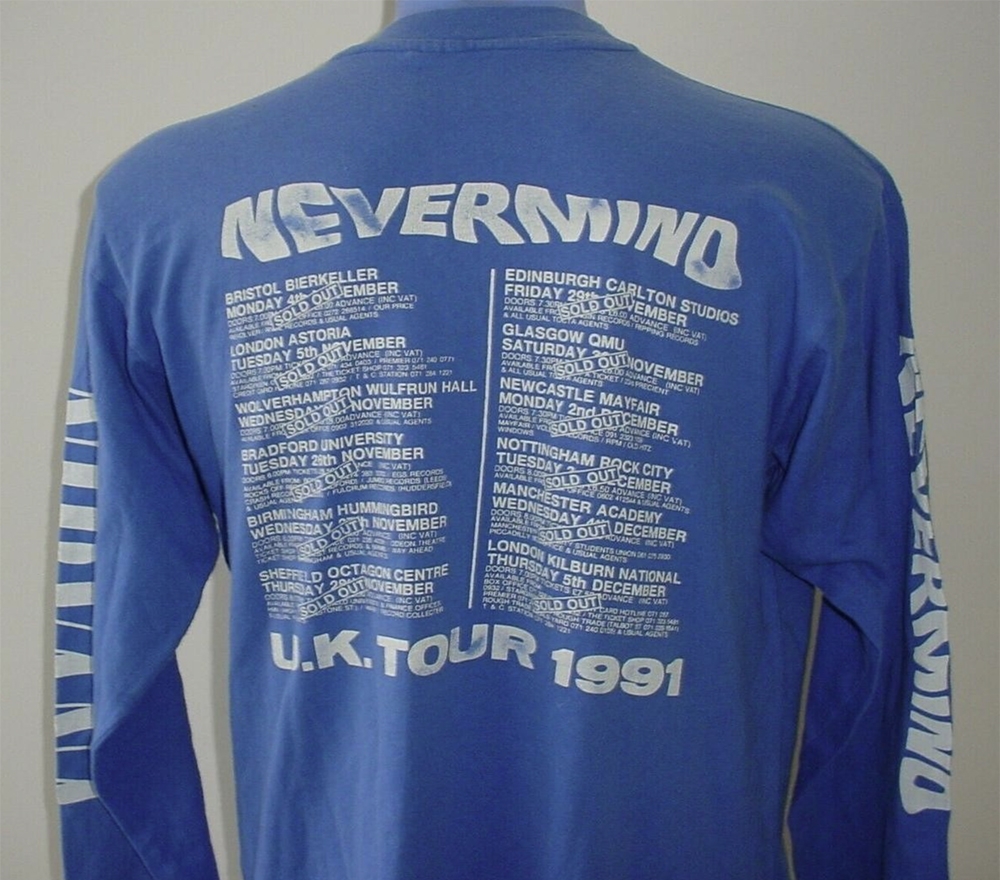 This longsleeved, double-sided, double arm-printed tee was reportedly acquired from a house owned by Ian Beveridge, the Monitor Engineer for Nirvana, Green Day, The Cure, and others. It went for $3301 on eBay. 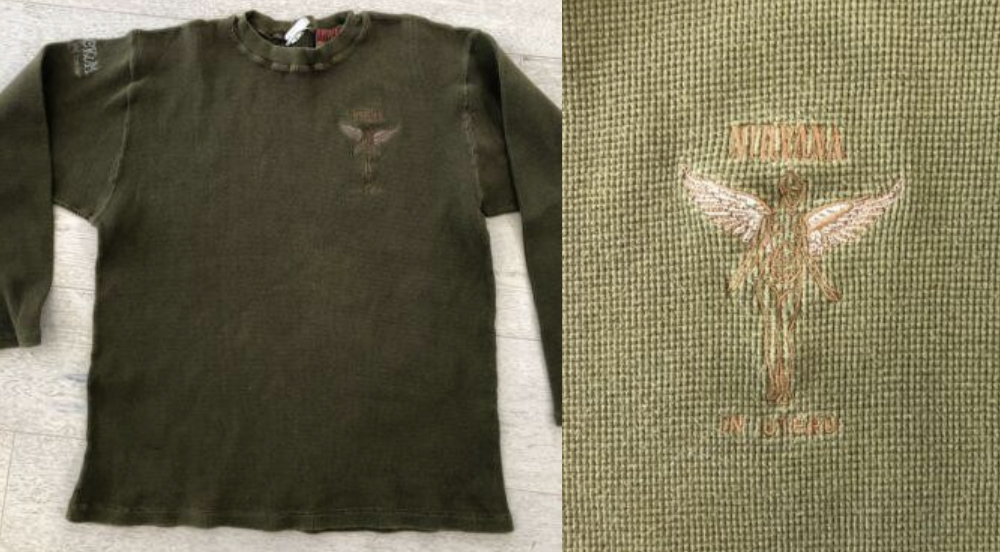 This fairly simply long sleeve olive thermal style t-shirt with embroidery fetched a decent chunk of change on eBay – it is was only produced in small quantities and given to the crew staff. 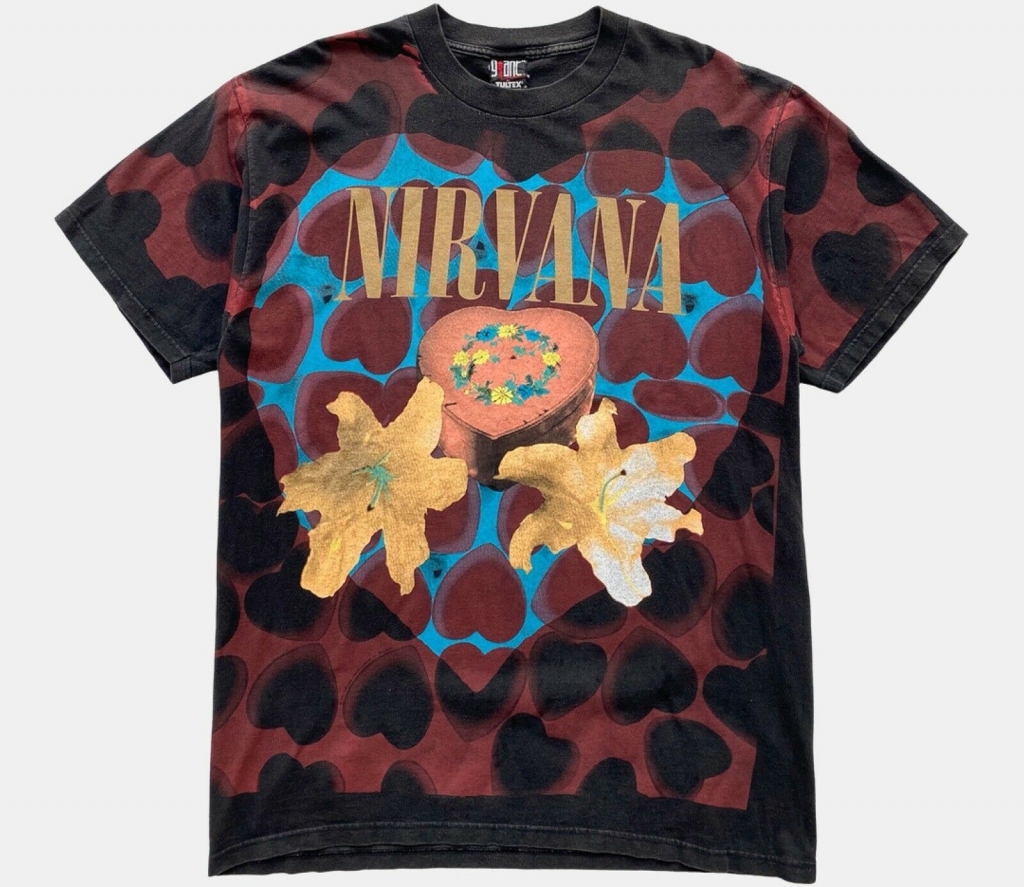 This one is old news. Its value has been inflated since Justin Bieber made it famous in 2015. Then several other celebrities gave it a bump in the years that followed. It’s still fetching $2000+, not bad for an all-over print band tee especially since AOPs were considered mids throughout the 2000s. 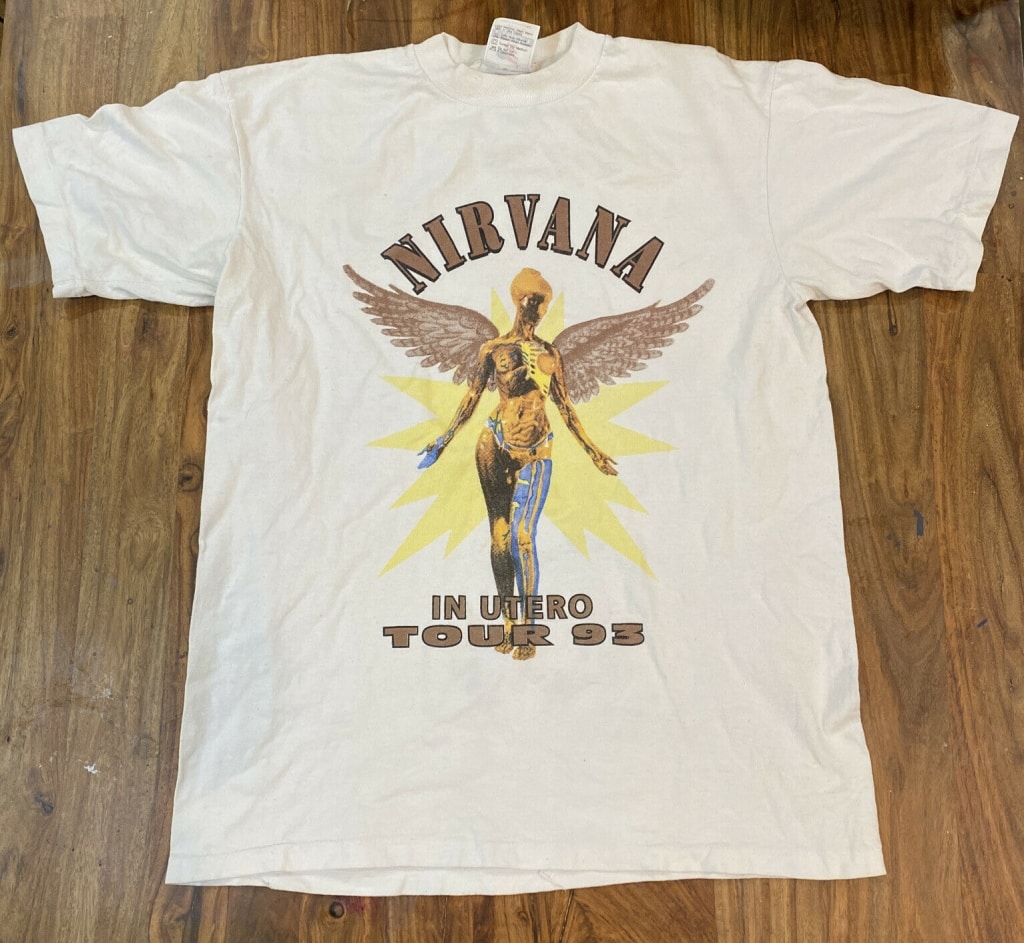 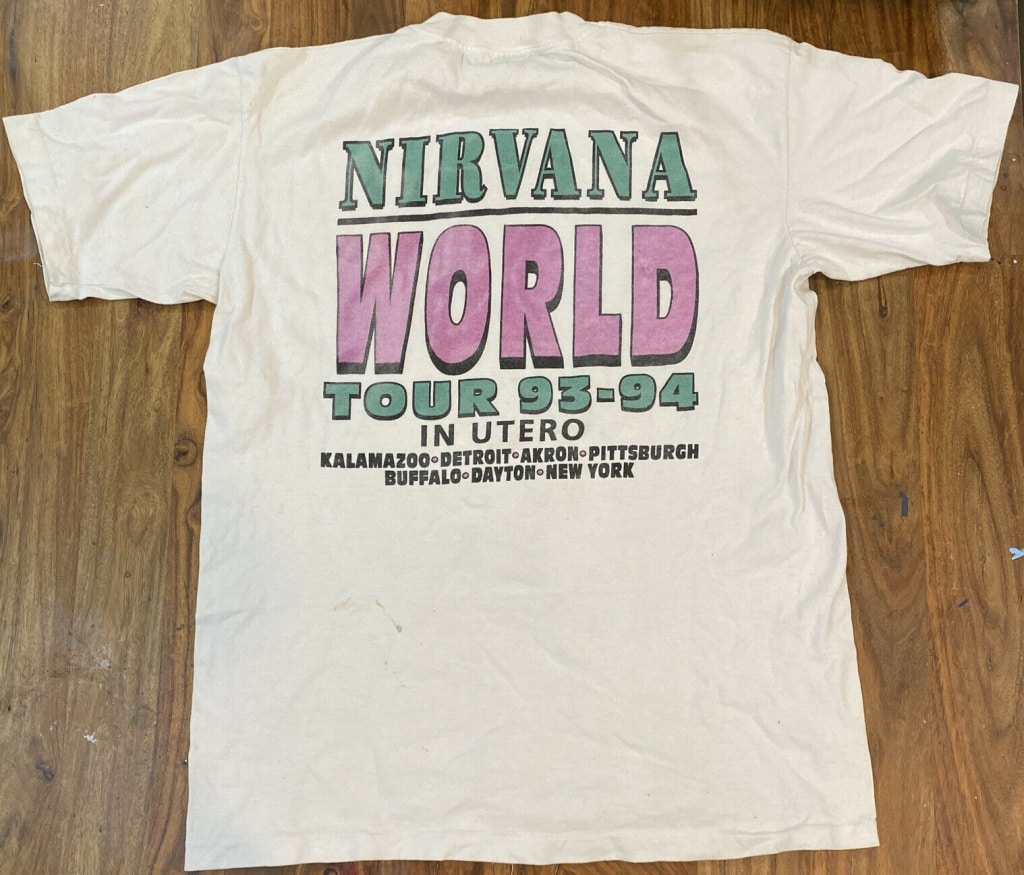 This lessor scene In Utero World Tour 93-94 tee boasts Kalamazoo as one of its stops. 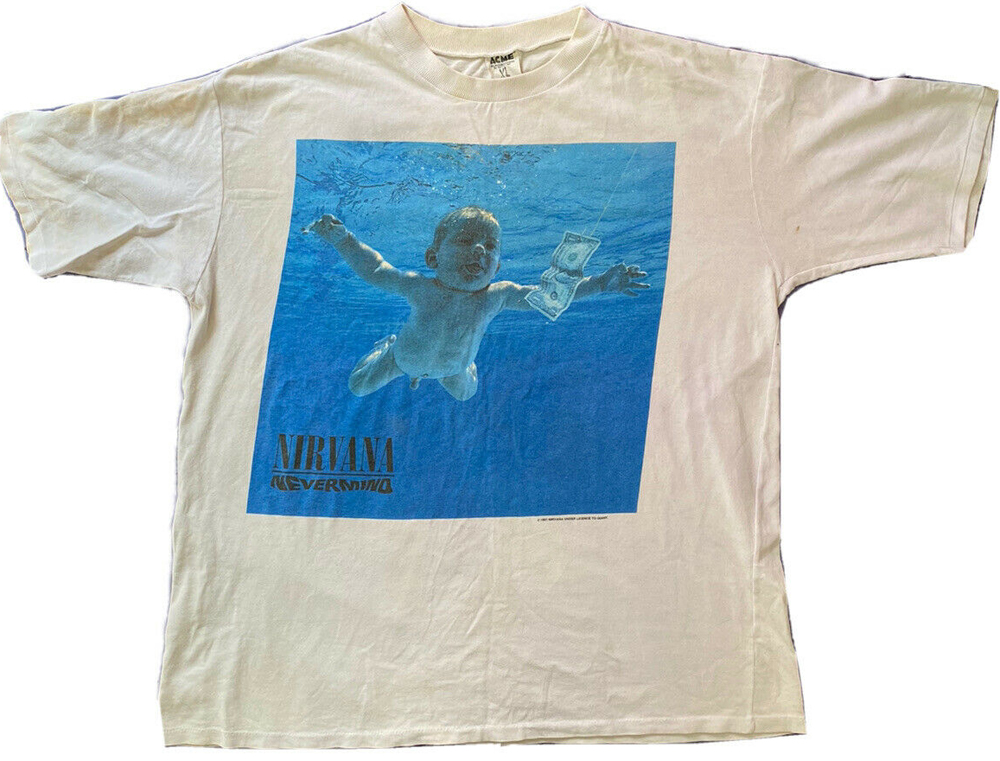 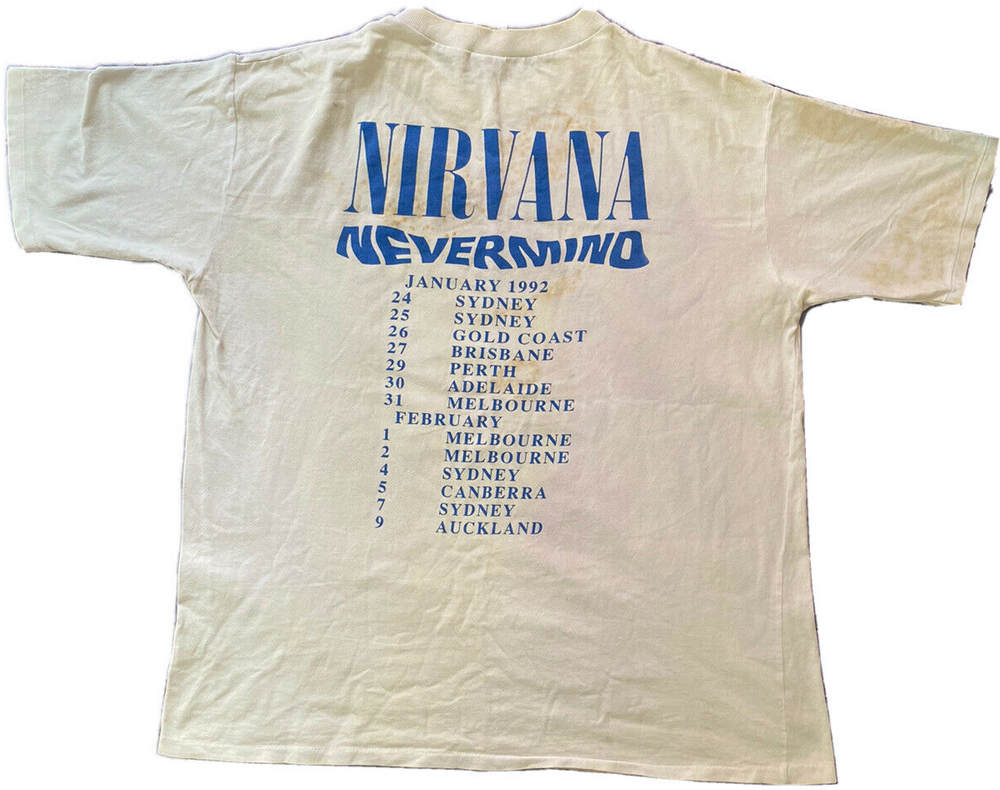 Recently this Nevermind tee with the Australia tour dates on the back fetched close to $1500 USD, on two different occasions. It’s roughly three times more valuable than the more common version with the playlist on the rear.

Oh, the stories this t-shirt could tell. Even in terrible condition, with an 80s Hanes tag holding on for dear life, this Nirvana tee still performed well. This GRUNGE-worthy beauty still managed to pull in $1200. Hopefully, it now lives a peaceful life in a frame, on the wall, in a nice home, in suburbia. What would the price tag be if it was in decent shape? 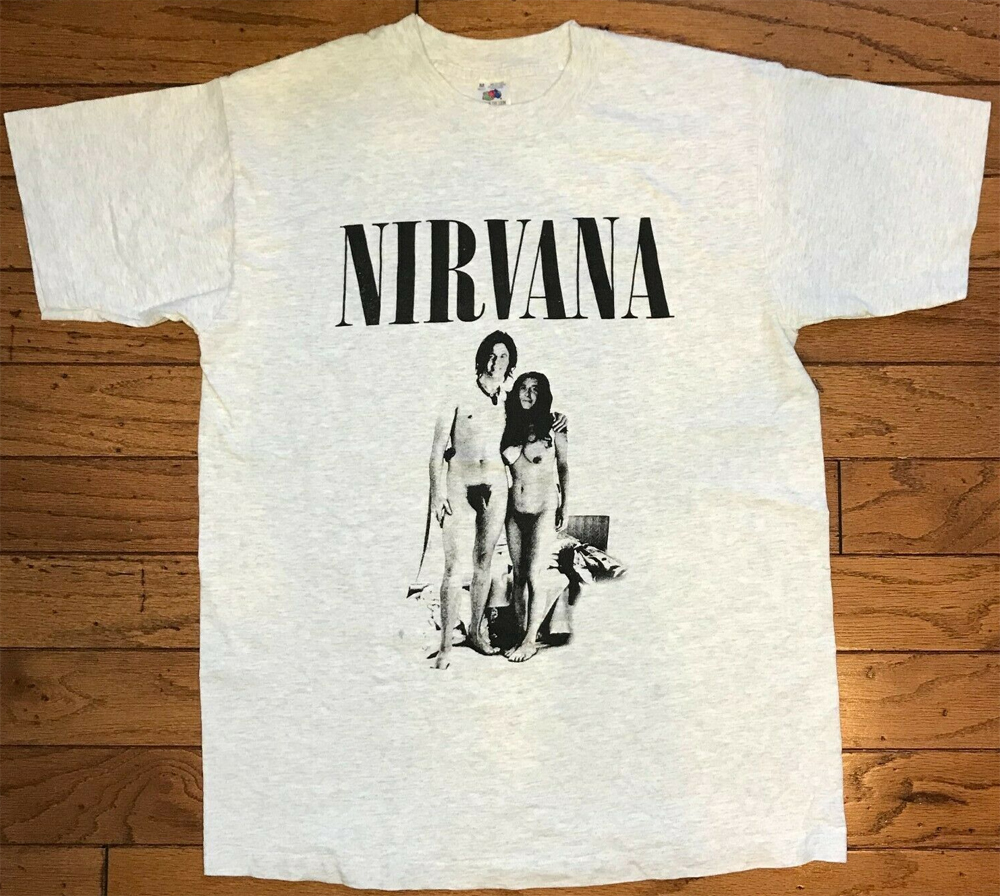 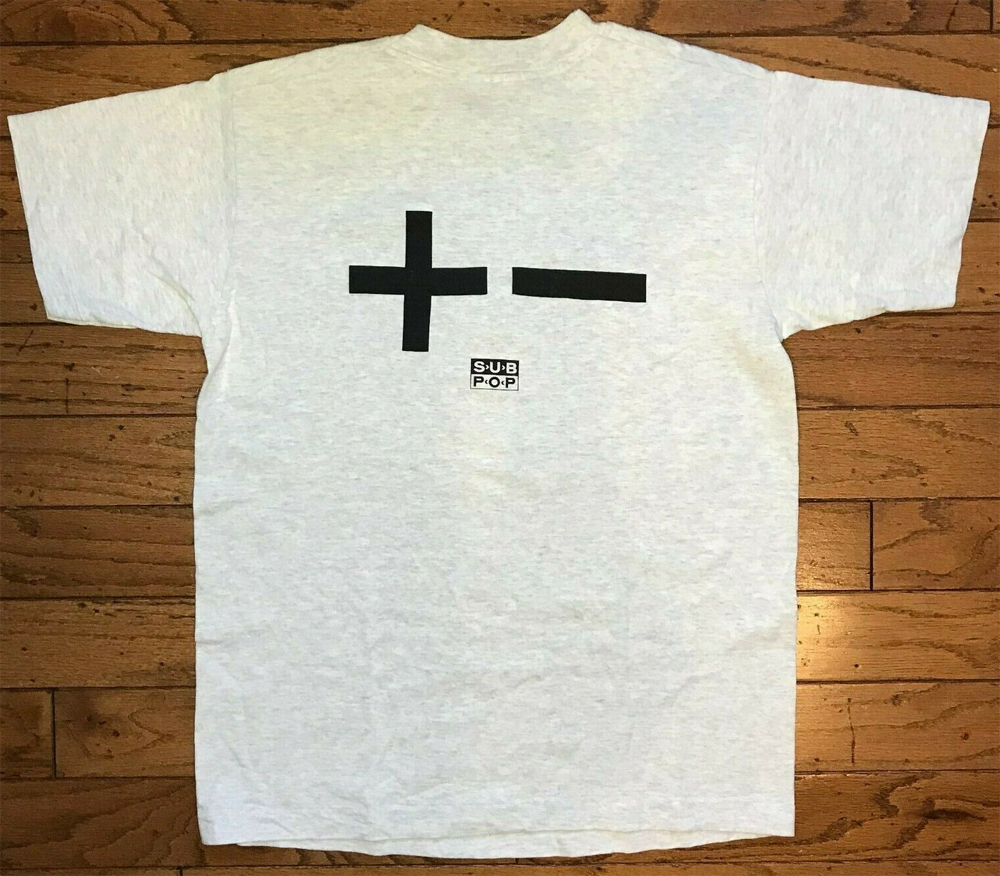 Surprisingly, the t-shirt above was recently auctioned on eBay and only sold for $330 USD. Based on its 2010 value it took a dive in the form of 67%. Ouch. Perhaps an anomaly as it typically sells in the $1000 range. On Instagram @bjmo1111 suggested it’s a forgery, and given it’s a one-color print and a sought-after t-shirt, it would be a prime target by counterfeiters. Unfortunately, when fakes of a print start circulating, the value of the original ones take a big hit. Not only because buyers get taken out of the market, but the market also gets gently flooded too. Sadly, buyers even begin to avoid the authentic ones due to authenticity uncertainty.

The same print recently became the first Nirvana t-shirt to be offered via the blockchain. Listed on Opensea by Bidstitch, the purchase price includes a digital representation of the shirt as an NFT and the buyer gets the physical t-shirt too. The item is currently open for offers, with the highest one to date being roughly $1200 USD (by us!).

The listing states the t-shirt has some impressive provenance:

The “Two Virgins” photoshoot by famed photographer Annie Leibovitz served as the original source for the now infamous parody tee by the band. Artistry and a healthy dose of meta-level absurdity have taken Nirvana, and their earliest merchandise to skyrocket in value.”

You can check out the full listing below:

We’ll keep you posted if it ever sells.