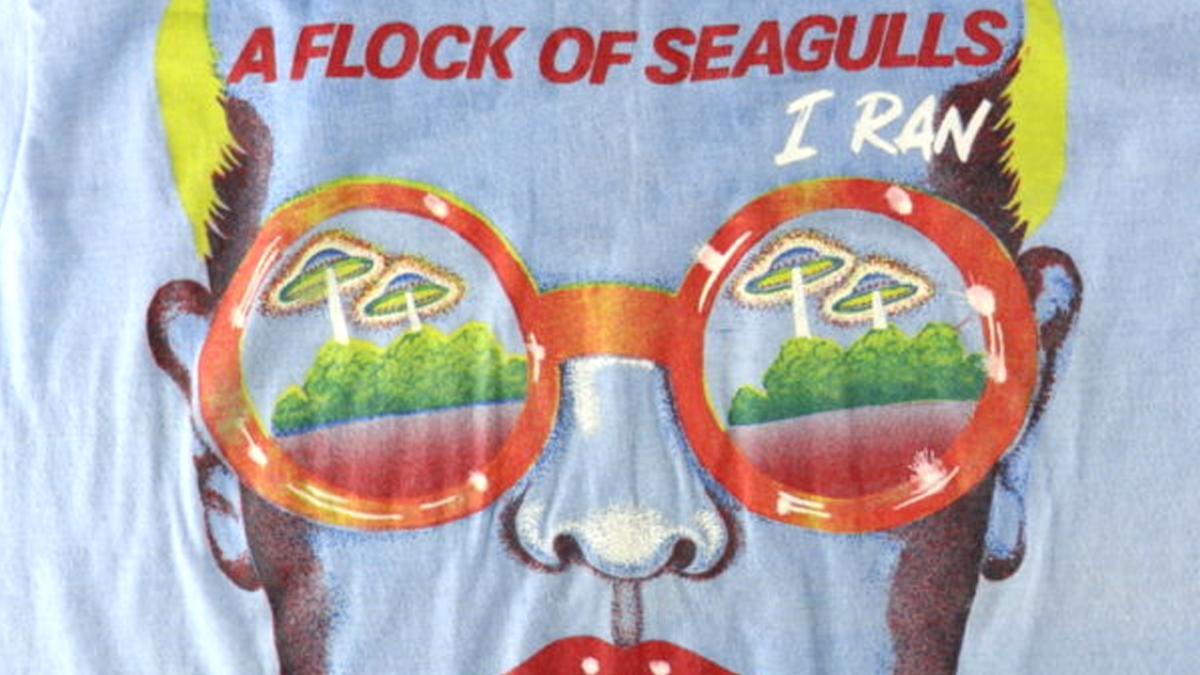 Electronic sounds. Synthesizers. Avant-garde fashion. Bizarre hairstyles. And music videos that made absolutely no sense. New Wave in the 1980s was the best. Here are 20+ vintage t-shirts to celebrate this unique sound.

Fact: Despite being a nightclub anthem Soft Cell’s Memorabilia 12″ release was a commercial flop. Phonogram Records opted to give the band a final chance to score a hit with a second single. The synth-duo decided to re-work an obscure track titled Tainted Love released by Gloria Jones in 1964. Jones would later become known as a member of T-Rex, Marc Bolan’s girlfriend, and the driver during the car accident that cost Bolan his life. While she recovered in the hospital fans looted their possessions and she was left with nothing. Talk about tainted love.

Fact: While Relax was topping the charts and being banned for its sexually suggestive lyrics F.G.T.H released their politically provocative Two Tribes song. The track’s similar sound piggybacked on the success of Relax and even had a don’t “shoot” message of its own given the cold war theme. In ’84 Reagan was at the height of his popularity and only a few years removed from an assassination attempt – you can bet Frankie had their sights set on causing a stir with this tee.

Fact: Hey, do you know that song that goes: Dun….dun-dun-dun-dun? It’s the theme song to Fashion Television – and gets regular airplay in the video game Grand Theft Auto: Vice City. More recently it was featured as #12 on VH-1’s 100 one-hit-wonders of the 1980s. Technically speaking the band can’t be considered one-hitters given they had a second top ten hit in 1989 called Room to Move (although I’m not really sure how that happened.) Hey, there’s nothing wrong with being a one-hitter – creating a single song that will be enjoyed for all eternity is pretty effin cool. And if you’re looking to catch them live, the band still makes the odd performance to this day – check them out here.

Fact: This British new wave outfit was originally called Huang Chung for two years before they replaced Huang with Wang. The band reportedly grew tired of people incorrectly pronouncing “Huang” as “Hung” rather than “Wang” and altered the spelling on their second album. Intended or accidental innuendo aside what does the name really mean? The band first explained that it meant “perfect pitch” but later changed their tune and said it’s the sound an electric guitar makes.

Drummer Martin Atkins joined Public Image Limited in 1979 first contributing to “Bad Baby” on their Metal Box album. But in 1980 Atkins went on hiatus from PIL to concentrate on his on new wave outfit known as Brian Brain. In 1981 Atkins rejoined PIL and remained active until he fully departed in 1985 to reform Brian Brain. That same year BB released an EP under Plaid Records (Atkins’ short-lived label.) Through their years the band had a few modest hits but were far from mainstream so you can bet their t-shirts are pretty scarce. In fact the one offered through the Collective (above) appears to be the only BB tee for sale anywhere.

The Collective has new wave covered from ABC to XTC. Ok, ok, the category is still growing so there’s not much in between. But do check out this XTC jersey and the heathered gray ABC tour t-shirt. There’s also an epic Frankie Goes to Hollywood tee which celebrates their ban from the BBC along with a gem by new wave legends Japan.

Fact: Mike Score, one of the founding brothers of AFOS was a hairdresser.

Fact: Echo & the Bunnymen made their debut in 1978 at Liverpool’s Eric’s Club opening for The Teardrop Explodes.

Fact: Annie Lennox and David Stewart were both previously members of bands called The Catch and The Tourists.

Fact: In some shape or form, four out of five members of MP worked with Frank Zappa.

Fact: The video for Duran’s breakthrough single, Girls on Film, was banned by the BBC because of its raunchiness.

Fact: Platinum Blonde was formed in 1983 as a cover band performing the music of The Police throughout Canada’s university and club circuit.

Fact: Boingo was led by Danny Elfman who also found success as a composer for film and t.v. Elfman is a four-time Academy Award nominee who won a Grammy Award for Tim Burton’s Batman and scribed the theme to the Simpsons.

Fact: Bow Wow Wow was formed when Malcolm McLaren persuaded three members of Adam and the Ants to leave the band.

Fact: All Four One was a re-recording of an unreleased album titled, Apocalypso.

Fact: TFF was scheduled to perform at Live-Aid but canceled the day of claiming two of their backing band members decided not to play. Later on it was revealed that the band was questioning Geldof’s motives and were also peeved they had been announced as an act without being asked. But the boys from Tears more than made up for it by donating the proceeds from four of their gigs to the cause and working with Geldof’s Sport Aid project.

Fact: Together from 1976 to 2005 XTC is more known for their lengthy success rather than any individual hit.

Fact: A-ha is by Norway’s biggest music export and the video for “Take on Me” is widely considered to be one of the best music videos ever made.

Fact: The title track on this album featured Phil Collins on drums and lyrics by Anni-Frid Lyngstad of ABBA.

Fact: Howard Jones had his debut performance on a BBC show called Top of the Pops. He later watched the delayed broadcast on a borrowed TV set that was resting on an ironing board.

Fact: I Melt With You is played in the credits sequence of the film Valley Girl.

Fact: The red angled letters ensure this gem is easily mistaken for the D.A.R.E. PSA t-shirts. And that’s a good thing since those Drug Abuse Resistance Education tees have their own ironic place in our vintage hearts. But it’s the subtle Human League neon blue arm print that makes it impossible to resist if you’re a fan of the iconic British new wave band. Dare! (just Dare in the U.K.) was The Human League’s biggest selling album because it featured their most successful track, Don’t You Want Me. The fans have been answering yes to that question since 1977 – given THL has released nine studio albums, four EPs, and twenty-nine singles. They’re one of the most successful synthpop outfits of all time.