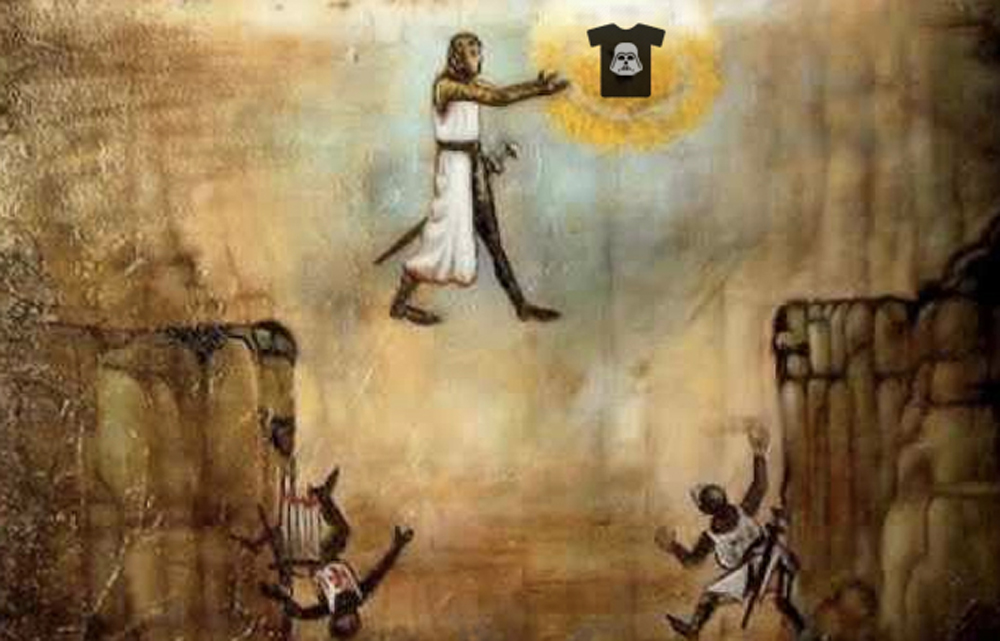 Han, Leia, and Luke all came back. The box office is boomed. Two of those beloved characters were killed off and one of them passed away in real life. Fans and critics raved and complained. And of course, original Star Wars memorabilia got more expensive than ever. A mint Luke Skywalker action figure sold for $20k on eBay. Leia’s “slave dress” from ROTJ sold for $80k. That’s chump change considering a miniature from the original film went for $375k. Then the dust settled after the final trilogy came to an end.

But there’s one genre of collectibles that has always been ignored by Star Wars fanatics: tees. Despite some of them being made in very small quantities for crew members, near unattainable – they usually fell flat on what they fetched. For the longest time, one could acquire an original Star Wars franchise-related tee for around the going rate for a set of Star Wars Dixie cups: 50 bucks. But the Force has awakened, and these tees are finally starting to be the coveted artifacts they deserve. Although, I still think they are undervalued.

So what’s the Holy Grail of Star Wars tees? One collector we spoke with may just have it. Despite being acquired from Ben Burtt (the academy awarding winning sound engineer for the original series) its origin story has caused a disturbance in the force.  Follow us to the end of this article for the big reveal and have your say…

In the meantime – here’s an array of the galaxy’s rarest. Many of them are from one Defunkd user who we’re officially branding a t-shirt Jedi. Thanks to Steve, aka SF415 for sharing them with us, go check out his entire vintage Star Wars and ILM t-shirt collection. 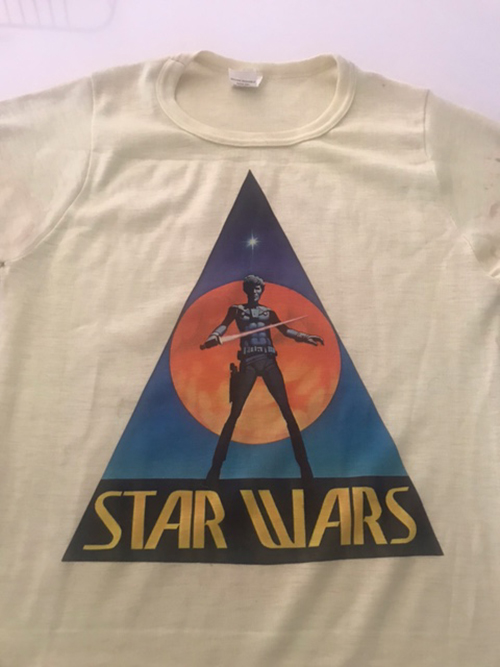 The latest addition to our list and “holy grail” candidate – is this t-shirt that was given to our contact by Mark Hamill. It’s in absolutely mint condition and has never been worn. 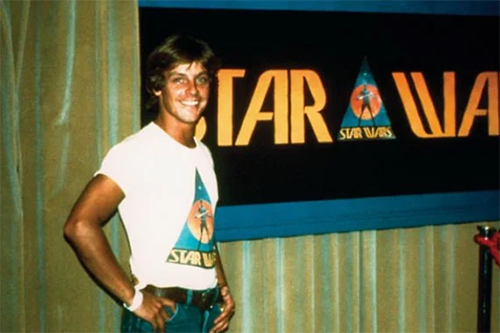 There are several photos floating around of Mark wearing this design in 1977, and some interesting information about the early days of Star Wars fonts here. 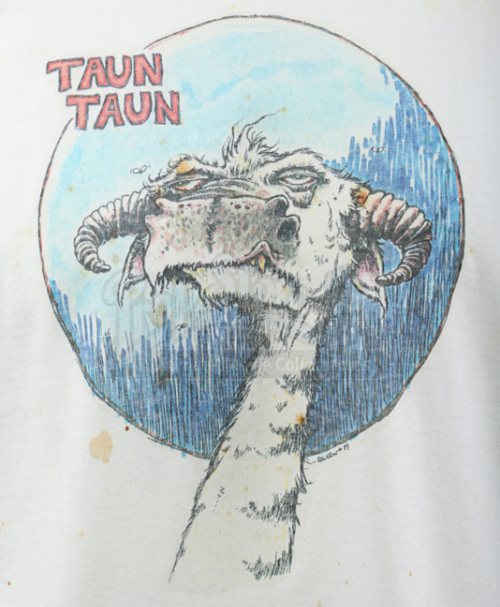 Phil Tippett’s tauntaun shirt from The Empire Strikes Back. Tippett is credited with stop-motion animation and miniature and optical effects for the movie. The artwork is by Ken Ralston and is dated 1979. This is the current Holy Grail. Tippett recently auctioned his off and it fetched $3000. The rumor is that only a dozen were made. 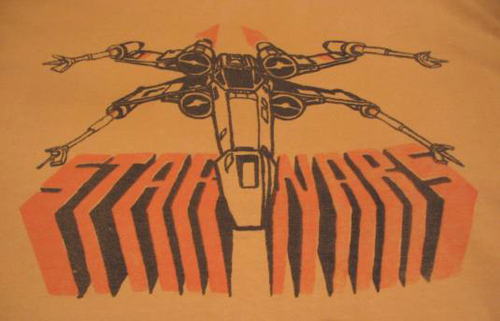 An X-Wing fighter tee. Why is the logo so different? Well, it’s rumored to have only been made in minute quantities for ILM crew, pre-release – in 1976. Only two have surfaced to date. 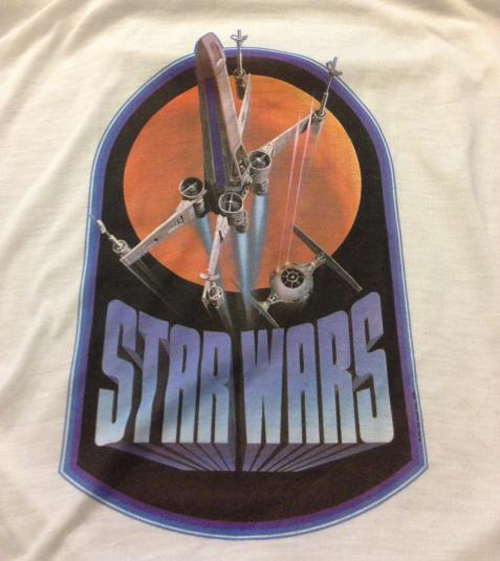 Vintage Return of the Jedi Glow in the Dark T-Shirt 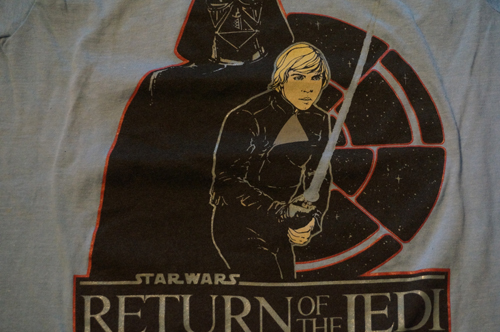 While this ROTJ tee may strike you as a more common design, this one is different. It’s a glow-in-the-dark prototype that was developed for Lucasfilm. It’s a Holy Grail all on its own given only two or three were ever printed. This is the only one that has ever surfaced and it’s in absolute mint, deadstock condition. This was acquired from a gentleman who worked at Fruit of the Loom as their printing supervisor from 1982 to 1984. He oversaw the Lucasfilm account and personally worked to bring this glow version to fruition – including working closely with an ink chemist to perfect the glow ink. At the time the glow effect on a t-shirt was pioneering. 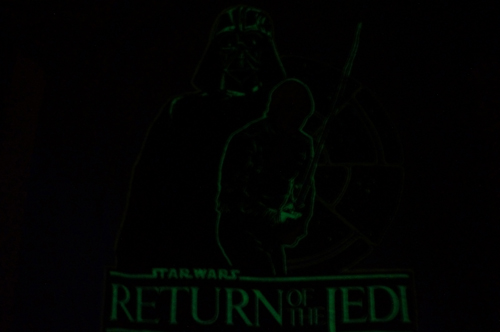 Once you charge the t-shirt in a well-lit room and then go to the Darkside – the glow is strong with this one. The project ended up being scrapped due to safety concerns – execs feared children may have been encouraged to interact too closely with light sources and injure themselves. As a result this never made it beyond the prototype phase. 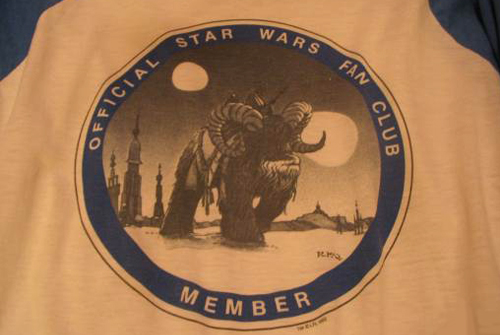 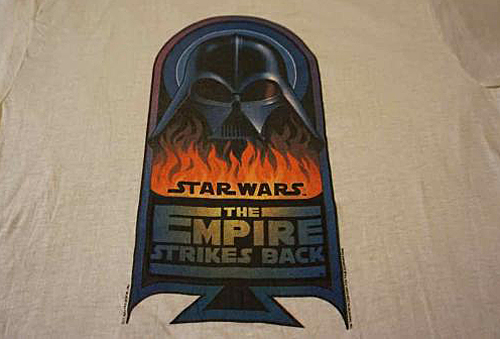 This Darth BBQ tee with an unpolished Empire logo was only given to the cast and crew – circa 1979. 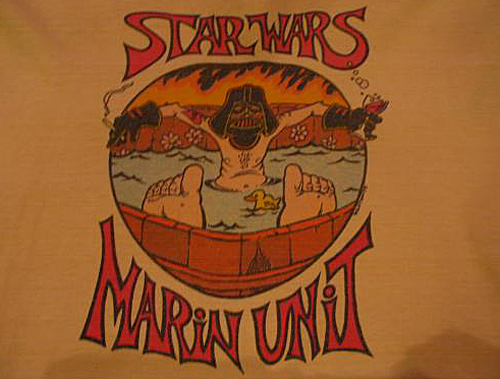 An ILM Empire crew t-shirt – this one reads “The Empire Lays Back” on the rear of the t-shirt. 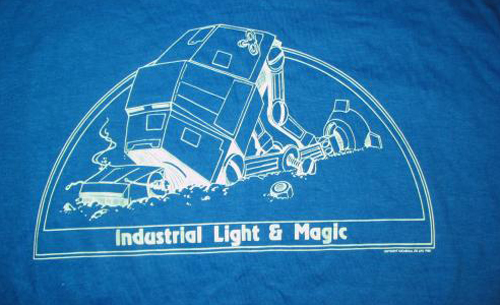 Another ILM Empire crew t-shirt featuring a wind-up AT-AT – a reference that the crew had been worked to the bone. The story goes that this one was acquired directly from an ILM employee and it has never been worn. 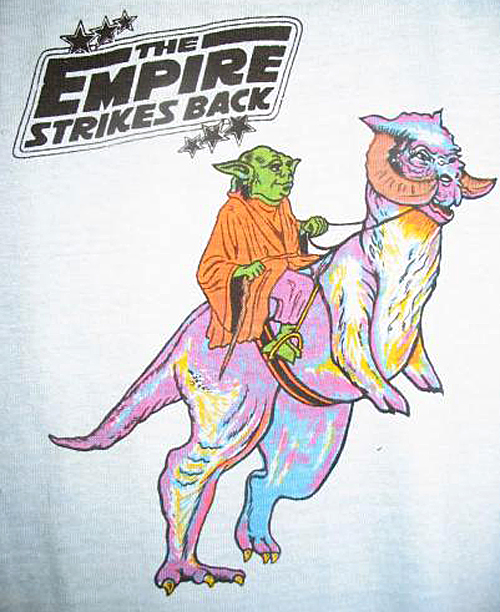 Bizarre Yoda Riding a Tauntaun t-shirt. Just like Yoda, its origins are mysterious. 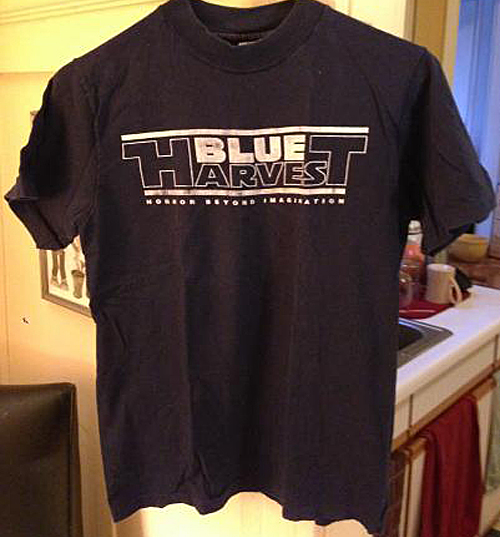 Blue Harvest was the fake title of Return of the Jedi to prevent fans from stalking and storming the sets. This was only given to cast and crew. “Horror Beyond Imagination” 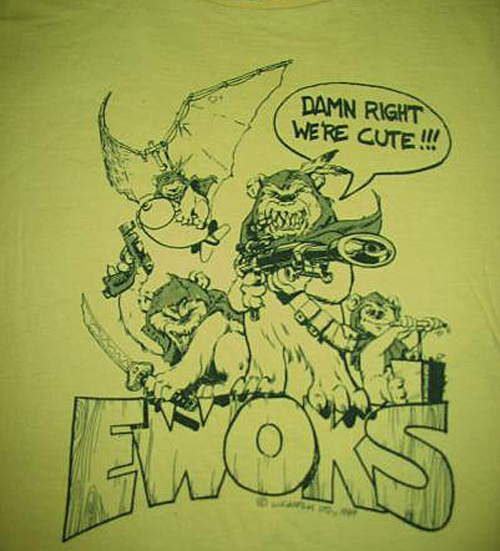 An evil Ewoks ILM t-shirt for Return of the Jedi crew. Still wondering if Ewoks ate those stormtroopers at the end of ROTJ? And where Leia’s dress came from?

Vintage Yoda I Hold Up Under Pressure T-Shirt 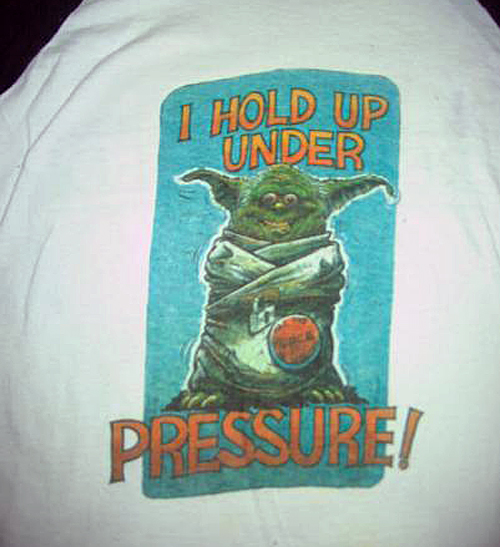 Crazy Yoda tee. More evidence that the ILM crew was under considerable pressure. This one has the Return of the Jedi logo on the back. 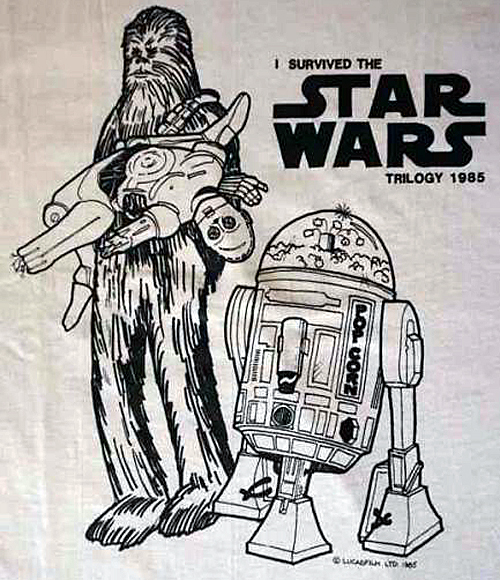 This was given out to Lucasfilm cast and crew in 1985.

And without further ado, the contender for the Holy Grail. Now, if we can only confirm its origins: 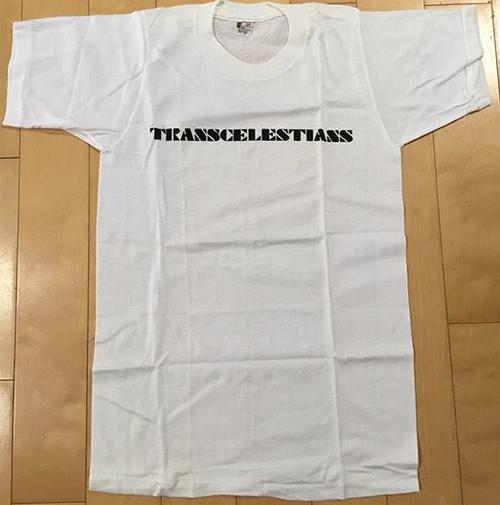 “I have an interesting piece of memorabilia. A Transcelestians t shirt. Never heard of it? That was the working title of Star Wars when they began filming in 1976. These shirts were only given to crew members and cast. I acquired it in 2009 through academy award winning sound designer Ben Burtt. He’s the guy who created the lightsaber sound, Chewbacca’s voice, R2D2 beeps….Darth Vader breathing etc. He’s also the reason they call Obi Wan Kenobi “Ben”…….it’s because of Ben Burtt’s stoic nature. Anyway – the shirt sat in an archive box in his office for decades. He gave it to a close friend when he moved from ILM to Pixar. I bought the shirt directly from her…..coincidentally she just happens to be George Lucas’s next door neighbor. When it arrived I tried Googling the title. There were ZERO search results. Zero. Just to give you an idea of how rare that is. Go to google and type anything in the search…..anything. Literally mash your hands on the keyboard…..any search will turn up 10K results. But not Transcelestians. I had it briefly listed in my online store and the emails I received from fanatics were hilarious. It’s amazing how vehemently people will defend a fictional universe…….kinda like religion. Over the years I’ve had some very unique shirts come into my possession. Once in a while its nice to have actual provenance to back its authenticity. Kind of a cool piece…..thought I’d share. May the Schwartz be with you.”

We love a good vintage t-shirt story and the provenance is strong in this one. The t-shirt and its tag checks out as being of the era – no question there. What scares me (and also gets me excited) is the fact that in today’s day and age, with every detail of Star Wars having been dissected and disseminated for almost four decades – how could this have flown under the radar? If indeed its history checks out – this tee would be responsible for adding a missing piece of information to the Star Wars universe. Not to mention the garment is in mint condition. Cha-ching.

What do you think? Have your say below.

Any Star Wars sleuths out there who can get an official word from Mr. Burtt himself?

Damaged Justice in The Judge