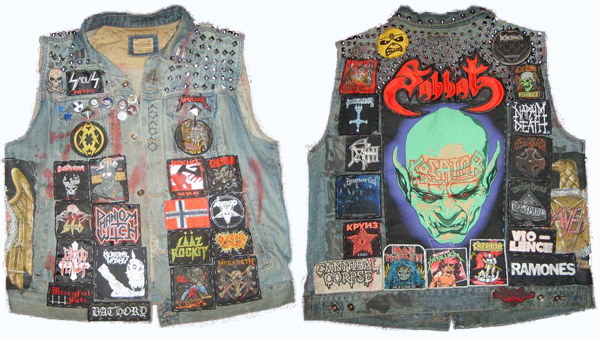 The vintage Battle Jacket, or Kutte, was born when a metal fan disarmed his jean jacket and customized it with various sized band patches, studs, chains, ink and pins. Metal heads primarily preferred patches, while punks replaced or fused the denim with leather, adding studs and pins. Oh, and just so you know (because I didn’t), Kutte, or Kutten, is a German word that is specifically used to describe these jackets.

The jackets are always do-it-yourself, with each one personalized according to the tastes of the “gentleman” who creates it. The biggest patch is placed on the center of the back, usually representing the band the individual favors. Around this patch, many smaller patches are placed, sometimes in a sort of hierarchy, but most times in a random formation. According to legend, the status amongst a particular group of friends could be determined by the detailing of their jackets – especially if the patches represented a band the wearer saw live.

While they are still made to this day, the true era of the Battle Jacket has long since passed. In the early 1990s the metal melted in to a mass of multiple sub-genres, the fashion followed and the jacket eventually faded due to the popularity of long-sleeved shirts, military and army fatigues.

Where are all these jackets now, you ask? Most likely still possessed by their creators, who will eventually take the relic to their graves. If you’re in a hardcore-artsy-crafty kinda mood, eBay has a consistent supply of both vintage jean jackets and band patches (below.) The closest you’ll probably get to the real deal will be by visiting tshirtslayer for the metal versions, and oxbloodoi for punk.

Going Once, Going Twice, Going Broke
The High Cost of The Lo-Life