This week’s strange and unusual eBay auction comes from the operator of an odds and ends collectibles store called Fancy Thangs.  It all began days ago when the proprietor of the store purchased a 1960s cooler from a dude at a garage sale. Here’s the kicker: dude’s leg was broken because he tripped over the cooler weeks earlier. All he wanted was to break off his relationship with it. The price tag is never disclosed in the auction details, but let’s assume it didn’t cost an arm and a broken leg.

Once the cooler landed at its new home, it immediately started raising hell. It killed roses, freaked out the family dog and caused a big black ant infestation. The unhappy new owners investigated further and discovered the cooler had a manufacturing date of June 1966. If I have to spell it out for you, that’s, six six six. If you still don’t get it the cooler was born on 666. For god’s sake, pay attention, it’s the sign of the devil!

The Coleman company couldn’t ask for a better free celebrity endorsement. Who better to represent a product hell-bent on maintaining its cool than a being who hangs out in the extreme temperatures of hell.

The opening bid is $9.99, which is 66.6$ when rotated 180 degrees, which is the precise temperature of hell. And when I subtract the two I’m left with a number that has absolutely no relevance at all. Freaky. 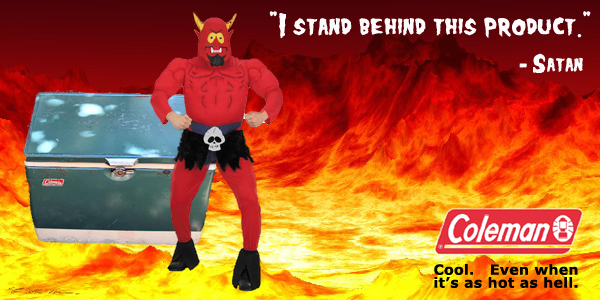 My Adidas Could Be Yours
Video Killed the eBay Star