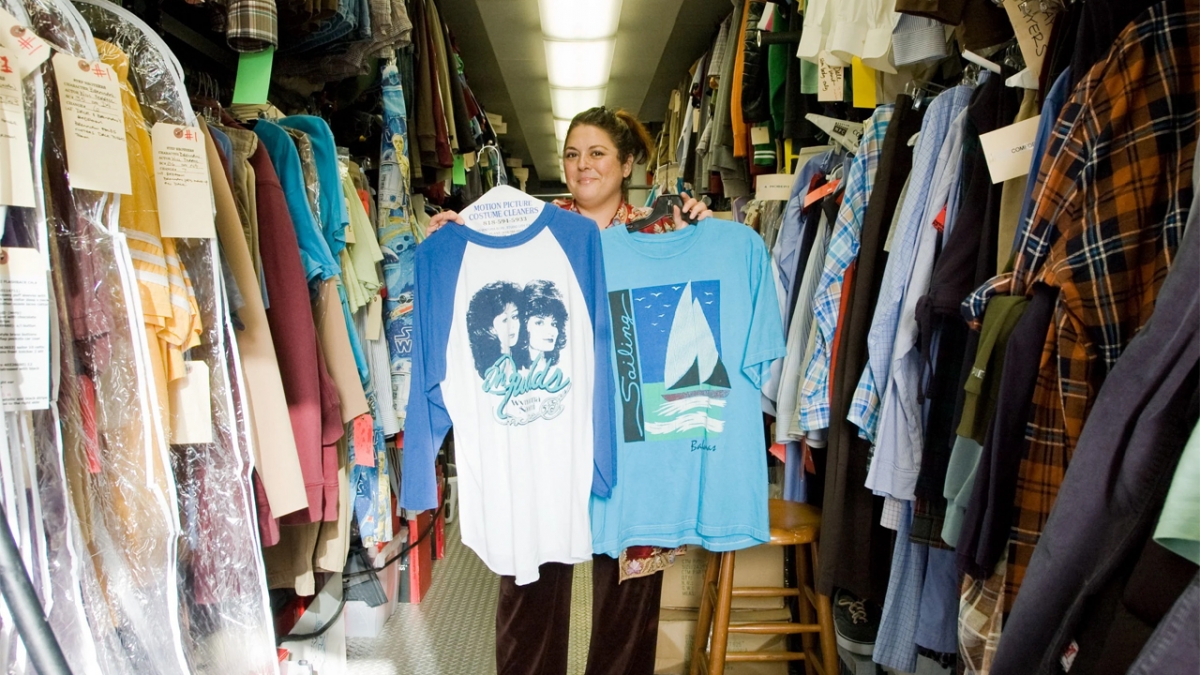 Meet costume designer Susan Matheson, Tinseltown’s go-to gal when a flick calls for a vintage t-shirt wardrobe. Her recent work on Step Brothers caused a frenzy of fans searching for the vintage Converse t-shirt John C. Reilly wore throughout the movie. Wondering where you can get one? Read on. I first met Susan while she was browsing through our store a few years ago. Yes, we’re happy at least one shirt we provided made a 15-second cameo in the film. Oh, and Susan has many times seen Will Ferrell in his undies, but then again, who hasn’t?

What’s the rarest t-shirt you own?

Right now I have a fantastic Ice Cube “Wanted by FBI” t-shirt that I can’t get enough of. I tried to use it in the film “Friday Night Lights” but Ice Cube wouldn’t give me permission, so instead it has become my favorite sleep shirt. The most valuable t-shirt I own was made by “World’s End”, Malcolm McLaren, and Vivienne Westwood‘s label from the early 1980s. I dragged my mother to the World’s End store and bought one of the t-shirts from the Pirates collection in London in 1981 when I was a teenager. My older brother had bought “Never Mind The Bollocks Here’s The Sex Pistols” on the street in London in 1977 and even though I was a kid at the time, from that moment on the Punk Rock movement and Malcolm McLaren sparked my imagination. A couple of years ago I saw my beloved t-shirt on the market for about $1200.

Tell us about dressing actors for a film?

It is impossible for me to find enough originals of these shirts in their sizes to be able to use in the movie as I often need as many as 12 of them. I have photo doubles, stunt doubles, and the actor wearing the same item at the same time when we are shooting. This is why I have to manufacture enough multiples of the t-shirt in the correct sizes to be able to use them.

When I recreate a vintage t-shirt I have to copy it exactly, as otherwise, I will never get the legal clearances that I need to be able to use it in a film. For example, the Yoda t-shirt that John C. Reilly wears in Step Brothers. This was a terribly expensive shirt to copy, it required about 15 screens eventually to get the print right.

All of the t-shirts that I have used on Will Ferrell have had to be recreated by me for him. A lot of my favorite t-shirts were originally meant for kids or women, so the sizes were always terribly wrong for him, as he is 6’4″. I’ll never forget the baby pink Crystal Gayle t-shirt that I used on him in Talladega Nights. I had purchased it at a thrift store in North Carolina and I loved it immediately as it was both so right and so wrong. Not only was the t-shirt pink, but her hair and lips were glitterized. Will loved it so much that he wore the Crystal Gayle t-shirt to the world premiere of Talladega Nights.

How do you get clearance to use a t-shirt in a film?

I still can’t believe that Lucas film gave legal approval to Sony studios for the use of the Yoda t-shirt as well as the pajama pants that I made for Will from old Star Wars sheets. I was absolutely sure that they would never ever say yes as the Star Wars films were produced by 20th Century Fox. I started off with about 30 different Star Wars t-shirts and then narrowed it down to my favorite, the Yoda t-shirt.

On Step Brothers, I submitted legal clearance forms for well over 100 t-shirts and in the end only got clearance on about 20. It’s always the t-shirts that you think are going to be a sure thing that don’t get approved.

I have received fascinating letters from bands who have refused my t-shirt requests. One of the best refusal letters was from the remaining members of Nirvana. They wrote a very heartfelt personal letter about why they didn’t want to let me use the Nirvana smiley t-shirt. On the other hand, there are bands like AC/DC who always, always approve requests for t-shirts and those are the very bands that I will never use in one of my films. If I see another film with a teenager wearing an AC/DC t-shirt I will have to gag. It’s become so cliche and it always tells me that people didn’t want to have to struggle to get something cool and different into the film. I always want to use something that people are surprised by and that they kind of have forgotten, but when they see it they have a warm and fuzzy feeling about it. I loved the Pablo Cruise t-shirt in Step Brothers for this very reason. Everyone who saw it paused for a moment and then said, wow, I remember them. I have since started up a correspondence with the lead singer of Pablo Cruise who was thrilled when his son saw it on Will.

What’s up with the Converse t-shirt John C. Reilly wore in Step Brothers?

It was quite difficult getting the crazy Converse Sneaker t-shirt into Step Brothers, but this is the one that everyone asks me about. It was a child’s t-shirt that I became obsessed with. The minute I found it I knew that I had to put it in a movie.  Unfortunately, no one agreed with me and in fact, they probably thought I was having a bad bad taste day, as opposed to a good bad taste day. Eventually, everyone surrendered because I had driven them crazy about it and had exhausted them into submission. If I love a t-shirt then I become like a snappy snarling dog with a bone, so I am thrilled to know that other people thought it was cool as well. Of course, when the film comes out it’s usually the t-shirt that had the most bitter battles that is the one that everyone remembers and loves.

How far will you go to get a shirt?

Anytime I leave town on a road trip I will stop and hunt at local thrift stores. Some of my best Americana t-shirts I have actually found in foreign countries like New Zealand, believe it or not. I have to admit that I am ruthless when it comes to vintage t-shirts. My friends will never let me forget the time that I paid an old lady for the t-shirt that she was wearing. I went into a store with her and bought her a new shirt in exchange. It’s not that I’m ruthless because I personally want to own every fantastic t-shirt in the world, it’s more like I want to spread the t-shirt gospel and show people what amazing stuff is still out there.