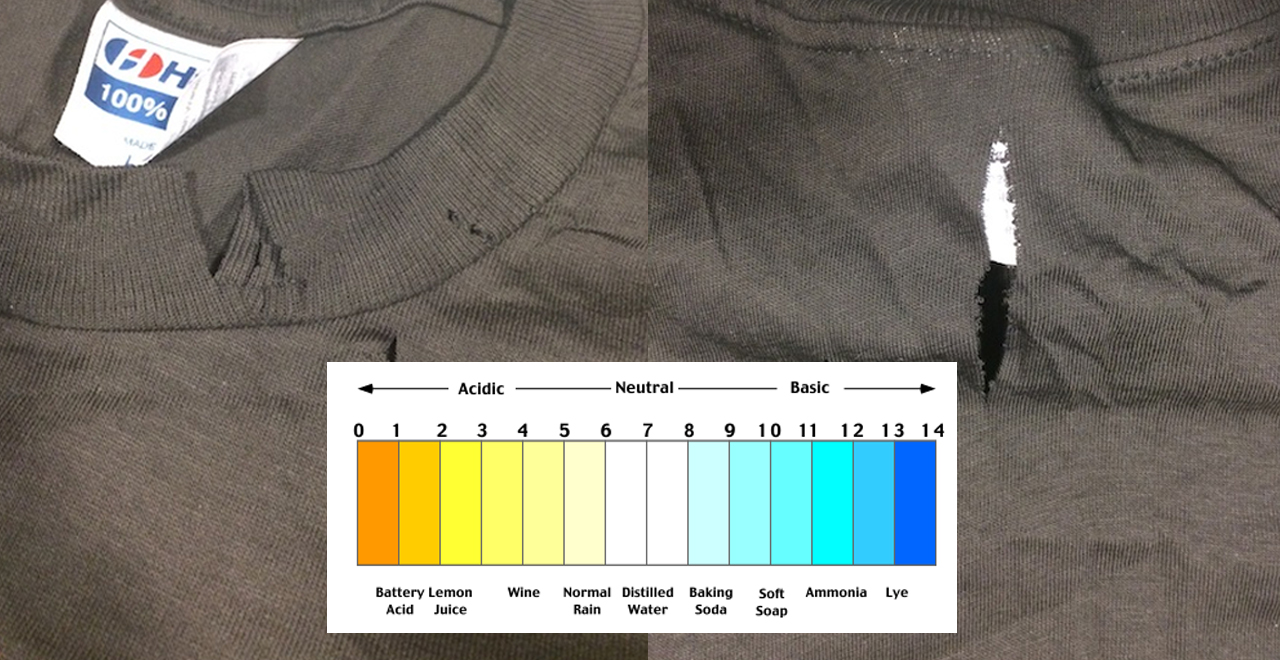 What is Dry Rot?

Surely you’ve done it. It’s mail day, and there’s a package with your name on it. You tear open the mailer and inside is that deadstock t-shirt you ordered last week. As you slip your arms through the holes and pull it over your head, you hear that unmistakable sound of fabric ripping. You’re not Hulk Hogan (hell, you’re not even Brooke Hogan), but somehow you’ve summoned the super-human strength to rip through a t-shirt like it’s Wrestlemania 3? It might be all of the steroids they’re putting in our chicken these days, but more than likely something just wasn’t right about that tee.

“It was deadstock though, it should be perfect, right?” Nope. That’s actually one of the key factors in this t-shirt phenomenon called Dry Rot that weakens the fabric to the durability of wet paper. The other factors WERE that the shirt had to be black, 100% cotton, and from the early to mid-1990s also. (Dry rot will still affect a 50/50 poly/cotton blend, though it just deteriorates the cotton portion and leaves behind a paper-thin, see-through, poly shirt.)

Notice how I said “were?” That’s because it’s about to get worse.

Last month on a trip to New York for a deadstock lot, we picked up about a thousand band and concert t-shirts ranging from 1994-2002. We checked for dry rot on a few of the high-risk tees by giving the fabric a little stretch and everything checked out fine. Affected t-shirts won’t stretch when pulled, the fabric will just split. By chance, one of the shirts that were far out of the early 90s danger zone was given a little tug and unexpectedly, it ripped. Whatever this mystery cancer is that plagues the deadstock shirts from the 90s is back. Now shirts from as late as 2002 have it. We tested every 100% cotton black shirt in the lot and found over 130 that were infected with dry rot. We even found that we had multiples of the same shirt in which some had dry rot and others didn’t. While this was a heartbreaker that Nicholas Sparks couldn’t even write, we knew that we were sitting on a goldmine of information in fabric samples.

After a number of phone calls and dead-end referrals, we finally made a connection with someone from the Cotton Inc headquarters (you know, “The fabric of our lives” people?) Backed with decades of textile knowledge paired with access to labs and chemists, he requested we send in some samples for testing. Among other samples, we sent them 2 identical shirts from the same batch, but only 1 was infected with dry rot. A couple of weeks later we got our answer to the mystery that had been eating our precious black deadstock t-shirts.

Disclaimer: I’m not a rocket surgeon and only partially understand this explanation. Mostly I’m just repeating things. So after the kind folks at Cotton Inc did some science stuff on the fabrics, this is what they found. The culprit behind this fabric deteriorating disease is Sulfur.

Turns out that Sulfur based dyes are often used when the price of fiber-reactive dyes is too expensive. Black sulfur dyes are the hardest to oxidize, a process done after the dyeing. If not washed, over time the sulfur becomes insoluble and the fabric becomes acidic. Over the course of years, the acid slowly deteriorates the cotton to the point where the integrity of the fibers weakens. (So this problem should actually be called “Acid Rot”) While fabric that has already reached this point can not be saved, there is some good news.

How Can You Test For Dry Rot?

The easiest way is to just tug on the shirt, but make sure to do it in different areas of the garment. For reasons not entirely clear, sometimes only certain sections of a shirt will be rotted and if you only test one spot, it might not tell the full story. If it’s a t-shirt you’ve purchased and you don’t want to damage it – a lot of people in the community suggest doing a micro-tug on one of the lower inside seams using just your index finger and thumbs, that way if it does rip you stand a better chance of returning the shirt because the tear will be very tiny and nearly undetectable.

But what if you don’t want to risk damaging the shirt at all?

Dry rotted t-shirts have a distinct smell, but so do regular deadstock t-shirts so it can be tough to determine the difference. According to @cody_tavares t-shirts in the later stages of rot will leave black dust on your fingers when you run your fingers across them. He was even able to spot a dry-rotted tee in a listing of eBay because the black dust was visible on the tag in the photograph. When buying any deadstock t-shirt online, be on high alert that it might be dry-rotted, and ask the vendor to tug on it before you buy it.

We know that shirts don’t start to rip until they have reached a pH balance in the 4s, about the same acidity as a glass of orange juice. The lower the pH number, the more acidic (water has a pH balance of 7). By letting part of a deadstock shirt soak in water, we can actually test the acidity of the water and know if a shirt is vulnerable to dry rot and how close it is. A shirt that reads a pH balance of 4 or 5 will have partial fabric deterioration, but will not be at the easily ripped point yet. Washing the shirt at this phase will neutralize the fabric and halt its deterioration, thus saving it from future dry rot. Unfortunately, I don’t believe you can t save a tee once it’s gone past the point of no return. But feel free to try to prove me wrong.

But how do you measure the pH in the water? $10 gets you a pH detector on Amazon.

BTW, while looking for other non-invasive ways of testing we tried using a high-powered microscope to test for dry rot but we were unable to spot any difference between undisturbed dry rot cotton and stable cotton.

So there it is. After years of scratching heads and drying tears, we finally have an answer to what causes dry rot. It couldn’t have come at a better time either, because we’re about to start seeing a lot more of it. We now know that the use of Sulfur based black dyes was used all the way into the early 2000s, and are likely still being used today. The key to preventing dry rot lies in early detection.

Check out my recent appearance on the Virtual Flea with Chris from 1980 Something Co where we did a deep dive into “dry rot.” There’s also a demonstration on how to test for it so you can save some tees at the 20:45 mark! And visit Wax & Threads for 100% dry rot-free t-shirts.