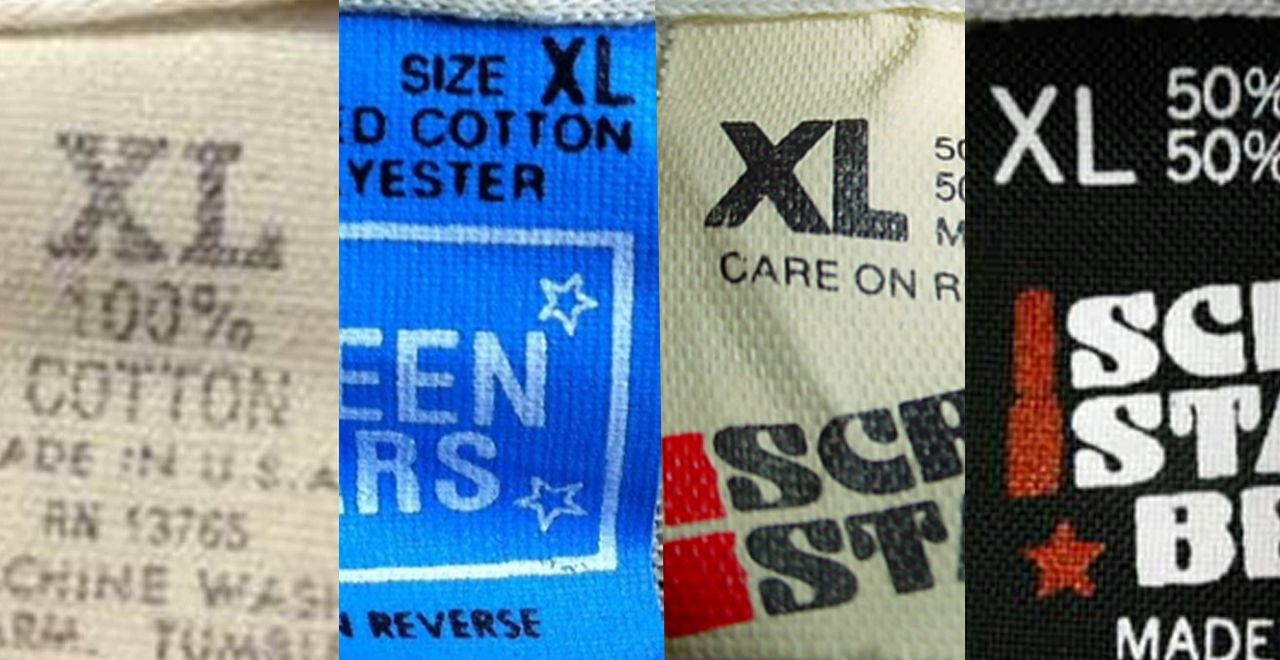 Screen Stars is the most recognizable vintage t-shirt brand from the 1980s and likely the heaviest circulated brand in that decade. It’s a property of Fruit of the Loom which used/uses the Registered Identification Number (RN) 13765. FOTL branded blanks were manufactured many decades earlier but they continued to market them as undershirts while Screen Stars was targeted at the burgeoning screen printing industry.

So let’s start from the beginning with the earliest version of a t-shirt we’ve found labelled with RN 13765. The following tag may be as early as the late 1960s when the trend was 100% cotton construction. Certainly there’s even older versions given FOTL’s role in undergarment wear (originally the “Union Underwear Company”) but this one is the earliest we’ve found not branded as FOTL and with an actual print. 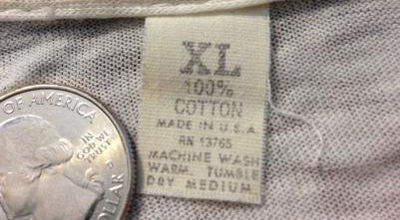 Then in the 1970s Fruit of the Loom ramped up their production of blanks with the following generic tag. It probably started as exclusively 100% cotton but then slowly morphed into 50/50 at some point late in the decade. Some of these tags boasted “Dacron Polyester” and there’s also a rare sticker version of this tag. 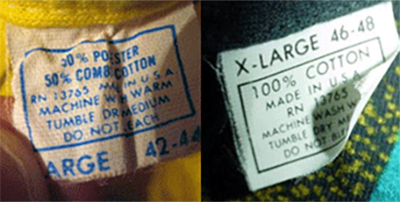 In 1980 FOTL officially branded their line of printable blanks as Screen Stars. The first version of the tag was made in a few colors – blue, white, and orange. Sometimes labeled “Super” – maybe because of an increased thread count – but I’m not entirely sure. There are 100% cotton versions of this tag – though they may be more scarce (thanks Captain’s Vintage!) It appears as though this tag design was only manufactured for one year. 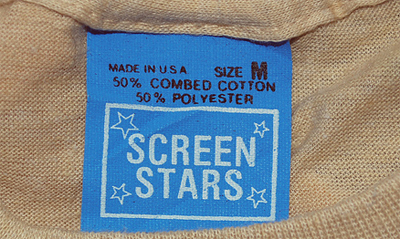 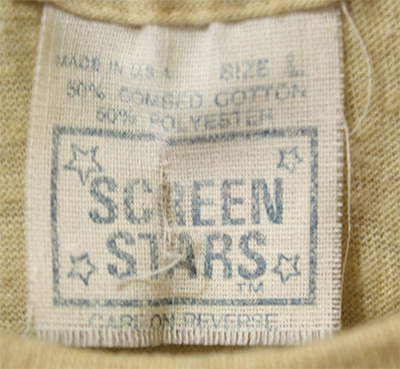 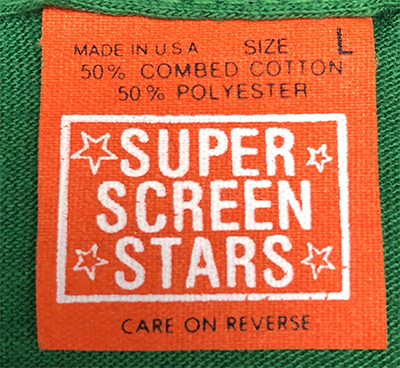 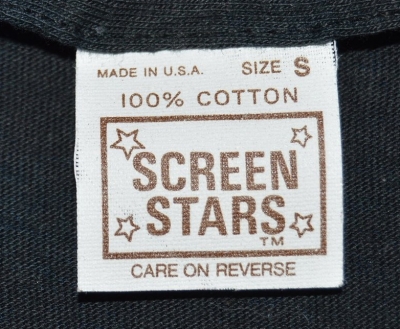 The star of the show came along in 1981. It’s the most famous version of the tag design was manufactured between 1981 and 1983. There was a green bar “Super” version of this tag and a 100% cotton version that had blue bars. There was also a “Heavy” version and even a “Junior Stars” line of tags for kids. 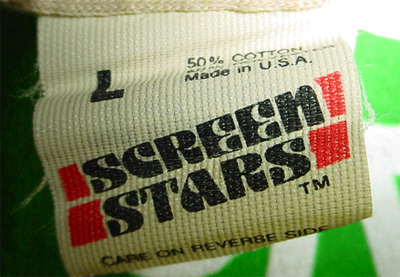 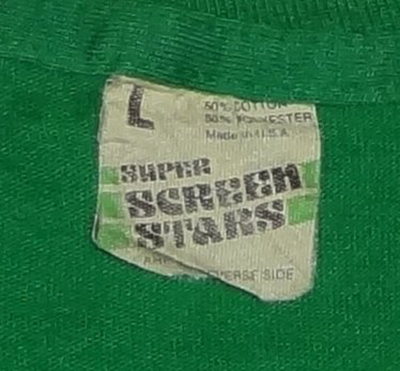 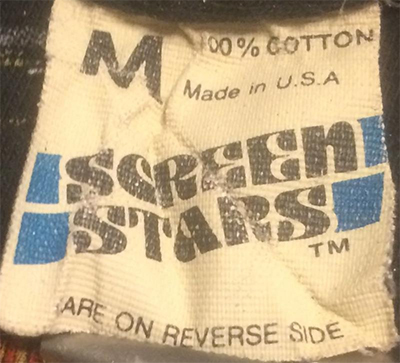 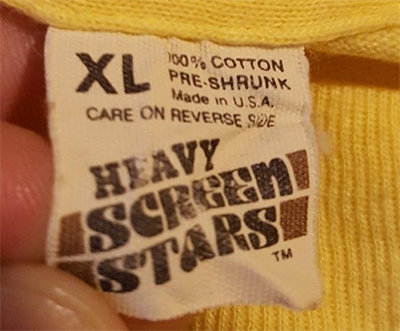 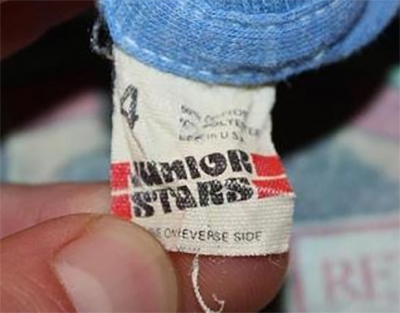 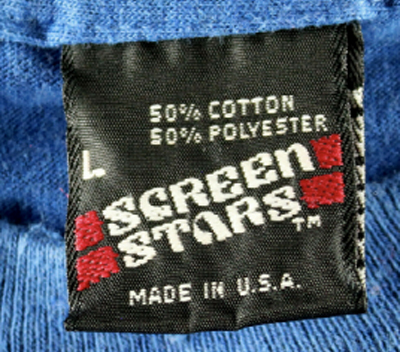 A lessor seen black woven Screen Stars tag with the Funky A. Some of these appeared on collared golf/polo shirts. 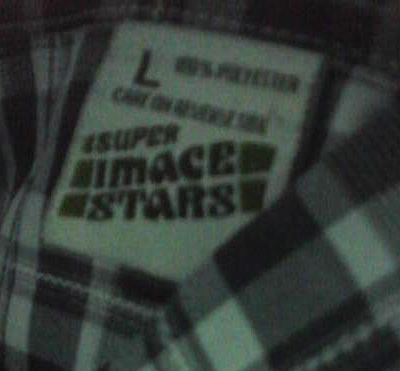 This one is a bit of a mystery. And all we have is one blurry image of it – like it’s a photo of the Loch Ness monster.  But it appears as though it was a line of 100% polyester button-down shirts that were meant to be printed on? If you have any other examples of this tag please let us know. 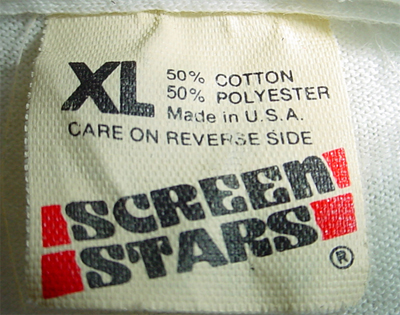 If you compare this tag to the previous versions from 1981-83 you’ll notice subtle differences – especially in the “A.” The different “A” design can help determine the date it was manufactured. The more stylistic “A” was earlier in the timeline. I came to this conclusion after noting dates that were printed on tees with these two tags. The tag above likely went into manufacture in 1983 and may have lasted until the end of the decade. My theory is that the suits in the boardroom at FOTL discussed changing the “funky A” because it was too unconventional. Maybe they got some feedback in a focus group and found people just didn’t like it. So along came a slight variation with its boring, run-of-the-mill “A.” Remember, a blank could be manufactured in 1982 – and not be printed on until 1985. This is quite common given a screen printer would purchase them in bulk and not actually put them to use for years. Keep this in mind if you’re thinking, “Hey! I have a tag like that but it’s got a much later date than your timeline!” And because of this overlap, the latter part of each time frame is more of an estimate – whereas it’s easier to determine when the tag first emerged.

Interestingly this specific tag version was also labeled as being “Made in” a number of other countries. 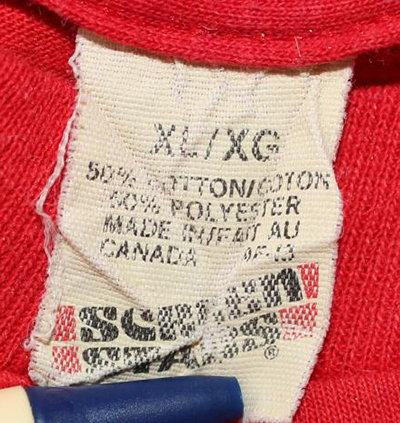 Screen Stars Over Size Made In Canada 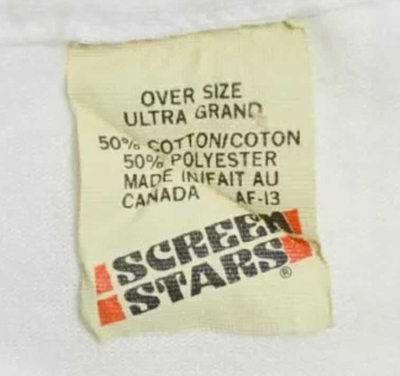 The made in Canada Screen Stars tag was generally slightly longer than the standard tag, without a different layout, likely to accommodate the bi-lingual language.

Screen Stars 50/50 Made in Ireland 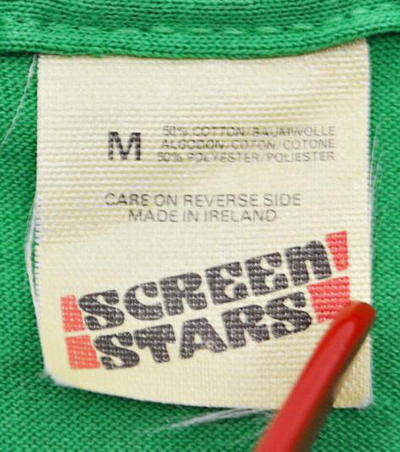 Screen Stars Made in USA With Spanish and French 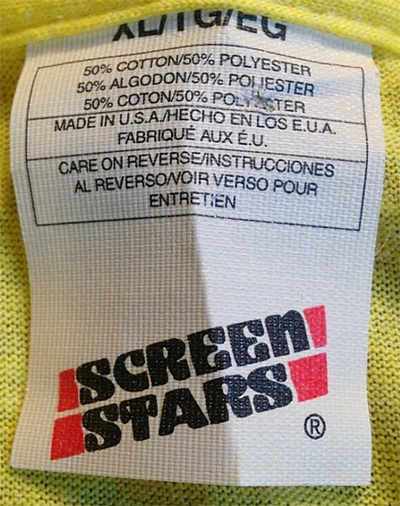 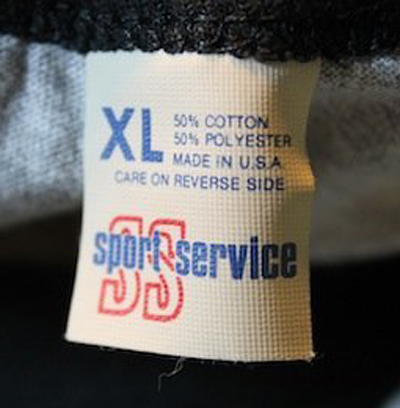 An uncommon tag that we assume was a line of sports jersey-raglan blanks. Potentially a precursor to the popular raglan blank, The Knits, which was also owned by FOTL. 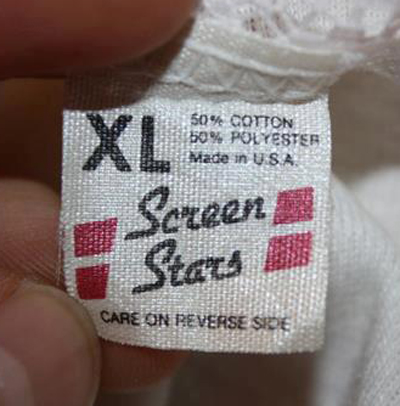 Another uncommon tag that appeared on women’s t-shirts. The example above appears to have lace detailing on the cuffs. 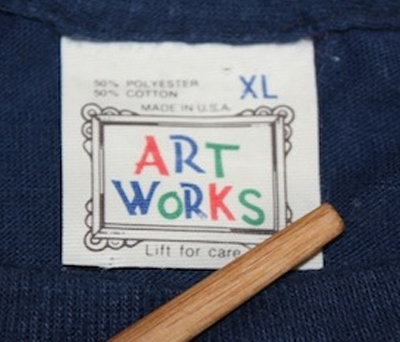 Another mysterious tag. This one doesn’t have any direct SS branding, the layout is similar and it’s RN 13765. @waxandthreadsvintage thinks it could be Screen Stars’ long-lost cousin. 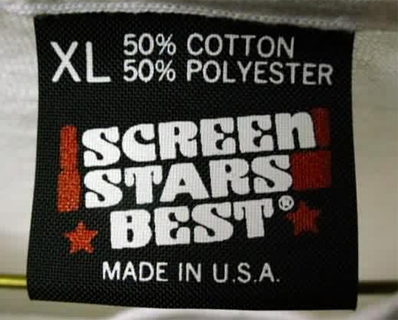 I’ve found the above Screen Stars Best tag on t-shirts dated as early as 1987 – but some have reported as early as 1986. It was likely manufactured concurrently with the previous tag then carried the brand into the 1990s.  This version of the tag was probably a response to bigger people with bigger bellies. These tees featured more generous measurements to accommodate the post-1970s human. The 50/50 blend tag appears to be far more common than the 100% cotton version. 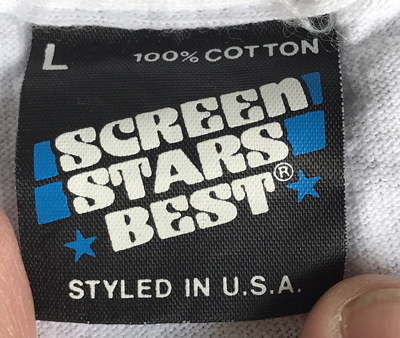 Screen Stars Best Made in Canada 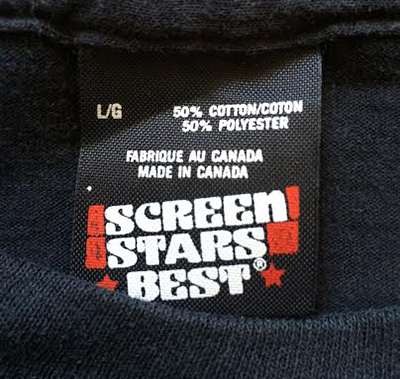 If you have any examples that contradict this info, please share photos below and we’ll work toward making this as accurate as possible!

For more tags check out our gallery of vintage Screen Stars tags.

We’re working on the 1990s Screen Stars guide next!

Jesus Appears on an Iron Maiden T-Shirt
Know Your Rights: How To Fight Back Against Copyright Infringement Claims