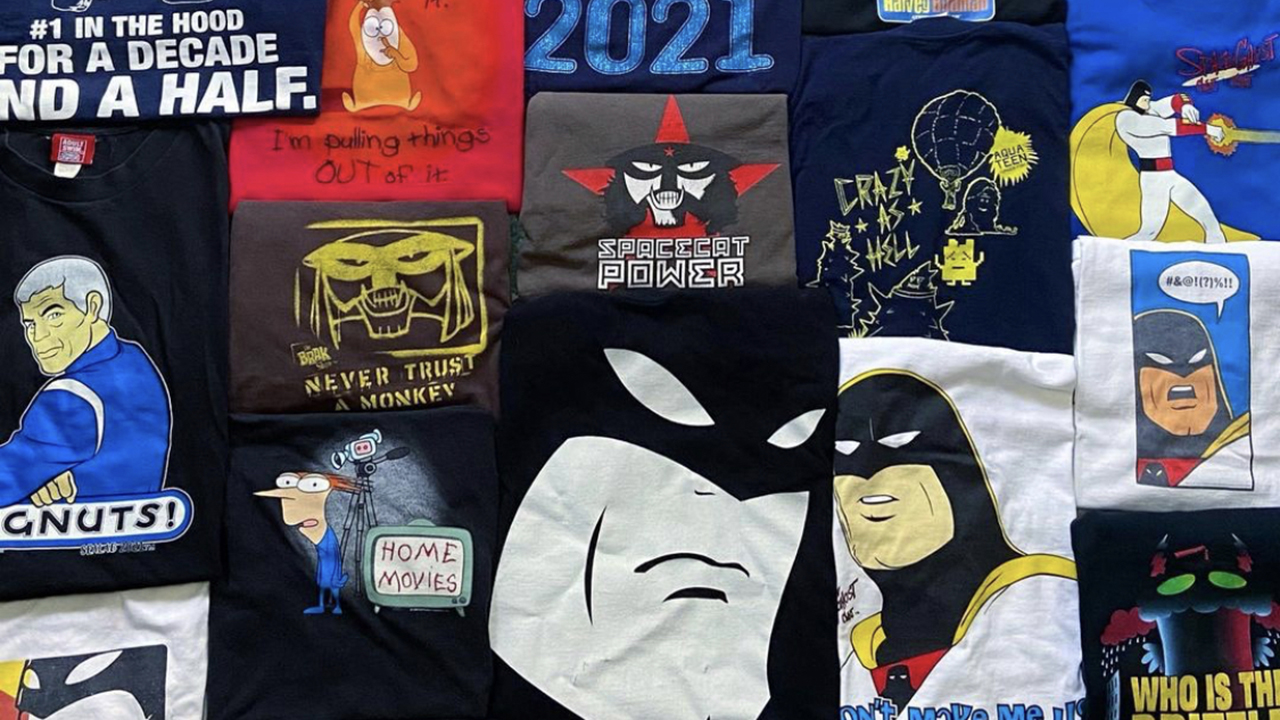 @tiltedmoons is the online moniker of t-shirt collector Brian Lugo. Self-described, “Chicago has-been with Floridian funk.” visit his page on Instagram to see more of his vintage Space Ghost shirt collection along with other gems from the 90s-00s.

Our story starts with Space Ghost. The classic Hanna-Barbera property that was given a new life by being reimagined from his 60s intergalactic superhero persona into an overly confident, yet very out of place, 90s late-night talk show host. “Space Ghost Coast to Coast” was one of Cartoon Network’s first original productions. The weirdness of the show eventually gave way to the channel’s decision to block out their evening time slots for content geared more toward grown-ups. The block was referred to as “Adult Swim.” 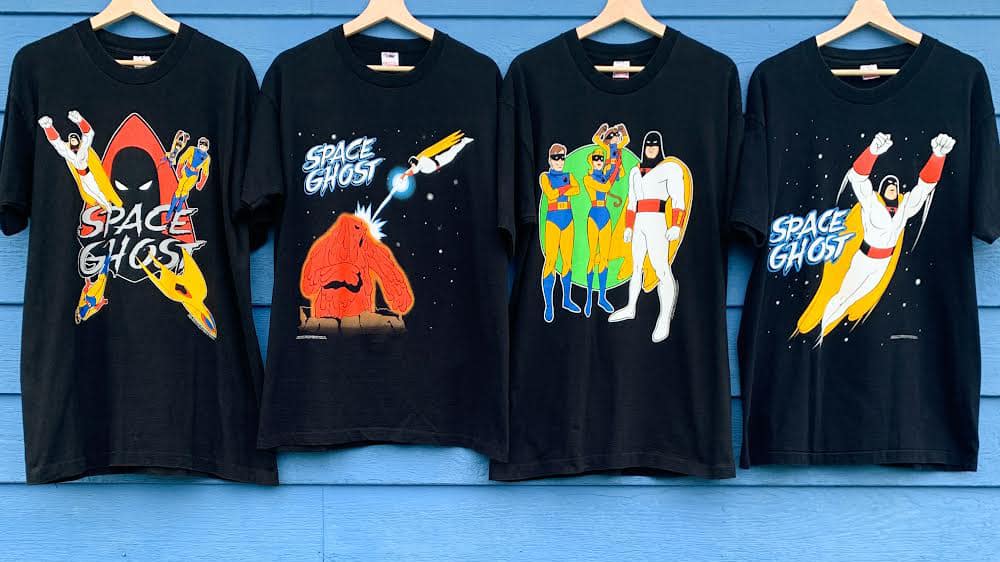 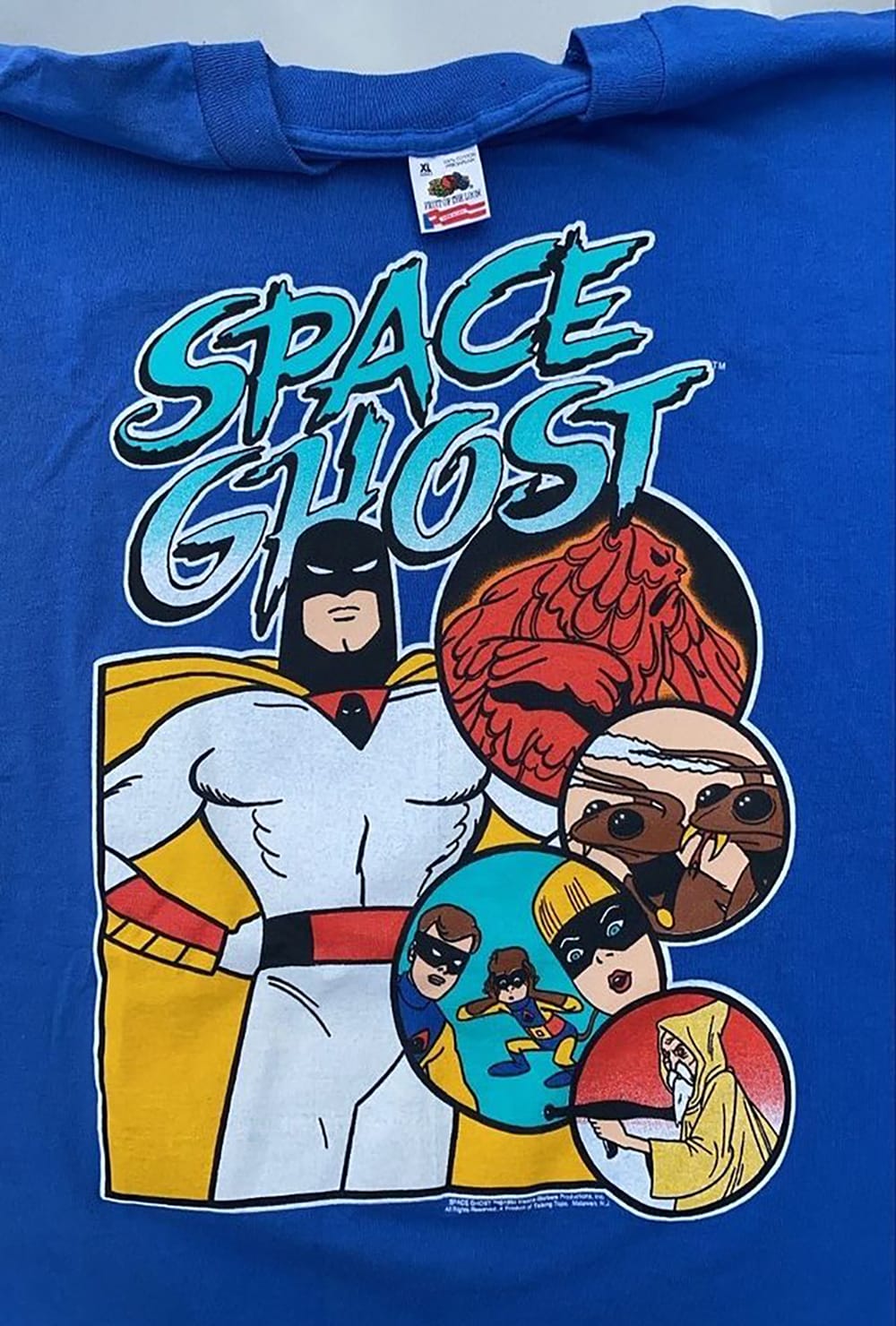 Instagram users @threadnbutta and @sd_theghost make up the known full collection between them of the 1994 talking tops licensed prints. a handful of these graphics have been seen on Delta tags as well.

Printed while Cartoon Network presumably signed off on hundreds of Scooby-Doo designs, t-shirts featuring graphics for both the original Space Ghost series as well as “Coast to Coast” were produced by different licensing companies. Around 1994, still in the early days of CN showing Hanna-Barbera reruns, Talking Tops printed a series of 5 shirts with large and vibrant graphics of the original 60s cartoon. Around this same time, the infamous t-shirt printing company owned and named after Stanley DeSantis also produced a Cartoon Network-specific Space Ghost tee. With the birth of “Coast to Coast,” we then began to see shirts for the newly imagined SG printed with a ’96 copyright date. These earlier designs are mostly pretty plain. With its success, however, more prints were produced and licensed. Heck, we even got a very rare Stanley DeSantis “C2C” tee floating around out there! But between ’97-’00, the apparel brand Fashion Victim obtained licensing to produce 11 “Coast to Coast” graphics. From throughout those years we’ve then seen these same graphics appear on a number of different blanks. From Fashion Victim’s own blank tees to single and double stitched Fruit of the Loom, to Allsport and even Delta. Some later runs even featured a large boxy cartoon network tag over the existing shirt manufacturer tag. 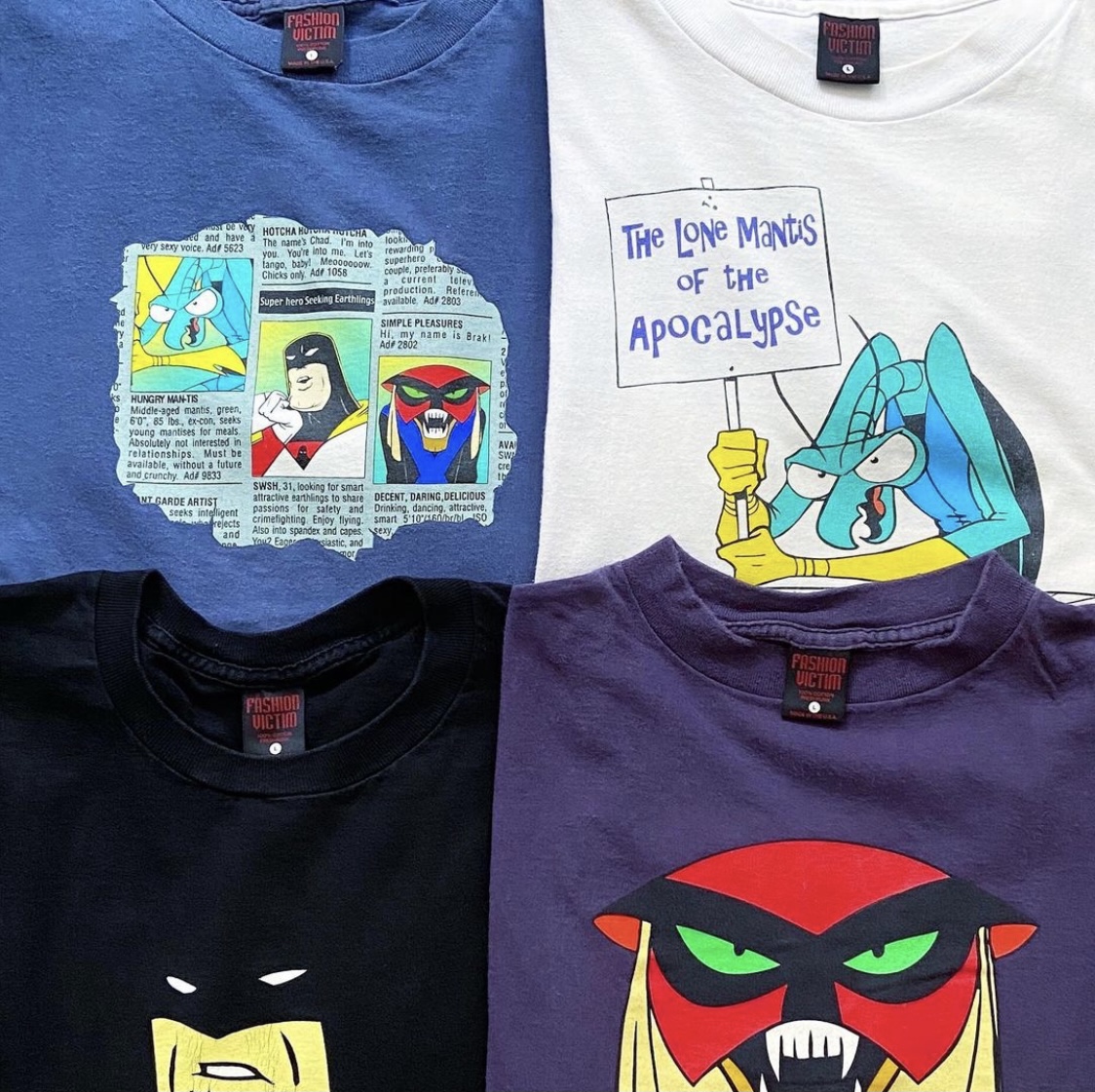 Four of the shirts eleven graphics licensed and printed on an original run of Fashion Victim blanks.

Branding became important at adult swim’s actual inception. Through panels at early 2000s comic-con events and other grassroots promotional campaigns, potential viewers and fans were gifted exclusive merchandise that would, of course, include t-shirts. We see early 00s Gildan Heavy Cotton and Fruit of the Loom tags used for these tees, which were handed out at these events to promote the late-night block. Most shirts at these earlier events were prepackaged into compression pucks to easily distribute amongst attendees. 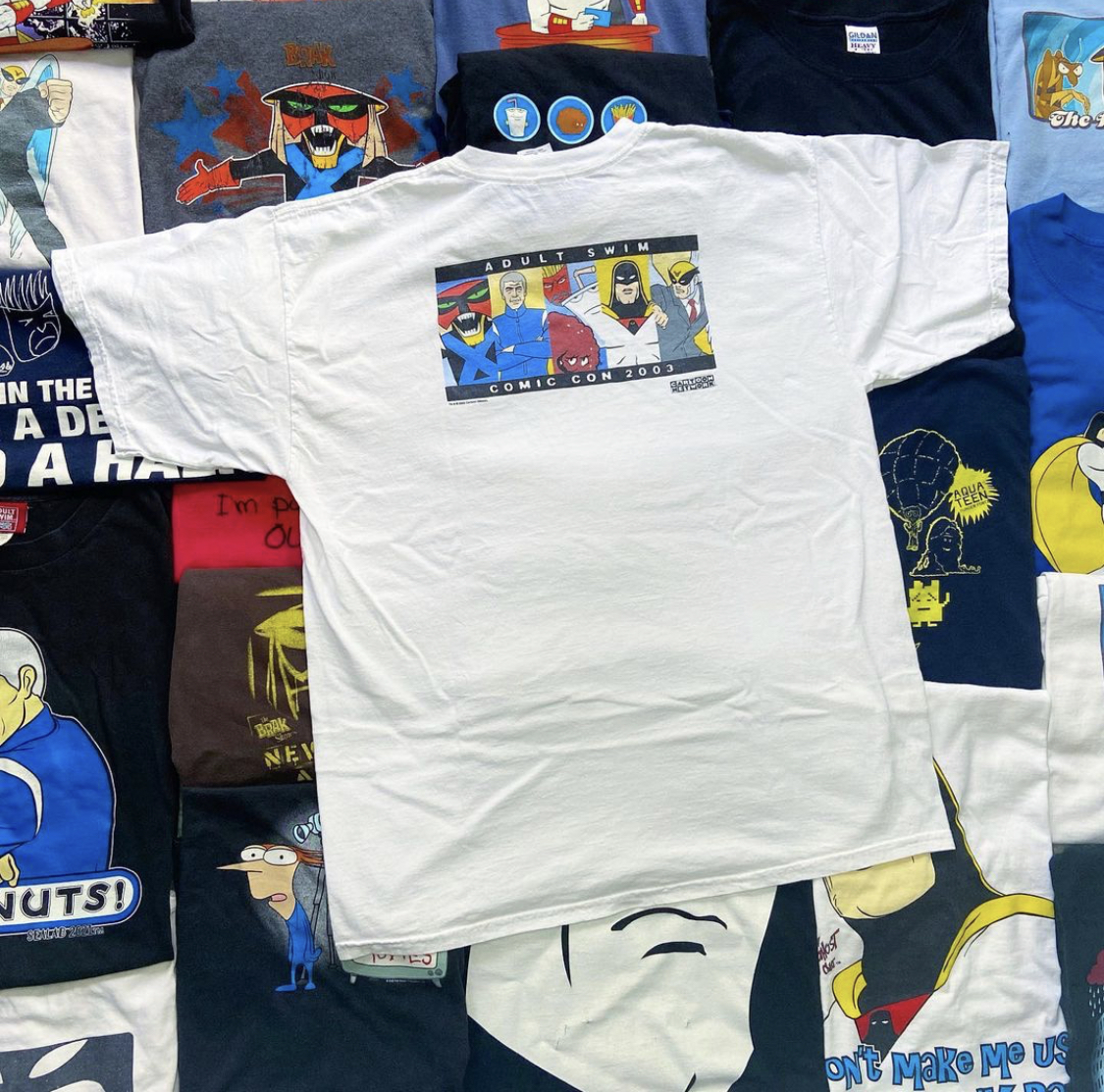 Pictured on top of the larger adult swim collection of @tiltedmoons is a comic con exclusive shirt from 2003 that was handed out at an adult swim panel and originally came in a compressed puck.

Once the channel was established, shirts for the growing lineup of shows were produced more abundantly. A few early designs that went on to be reprinted were done on M&O tags. The blanks being used were often double tagged before becoming harder to identify later on. Early on that traditional manufacturer branding tag was stitched over by a boxy red adult swim tag. Later shirt prints were done on blanks that saw a sleeker black adult swim tag. We see these tags used with slight variation until the early 2010s when screen printed tags were introduced. 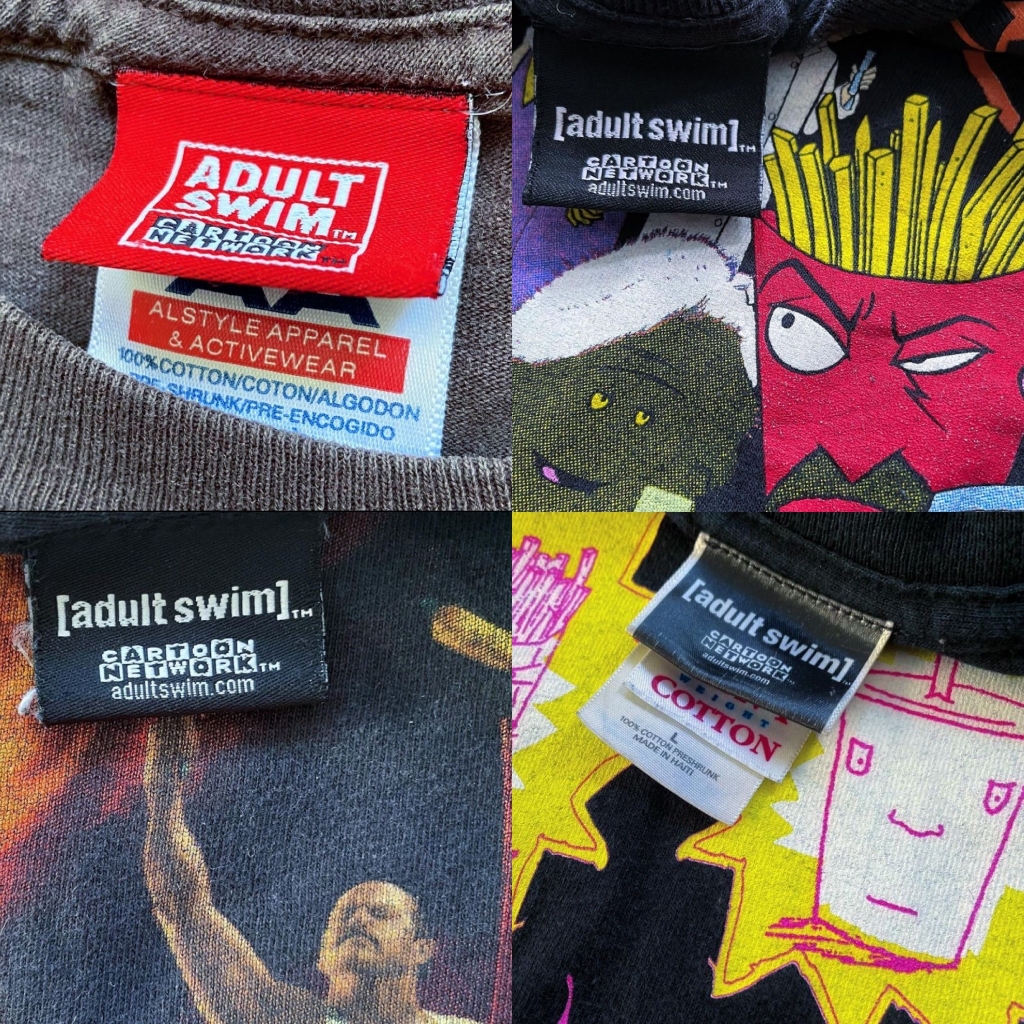 A collection of adult swim tags from ’03-’05, the red tag being the earliest used. 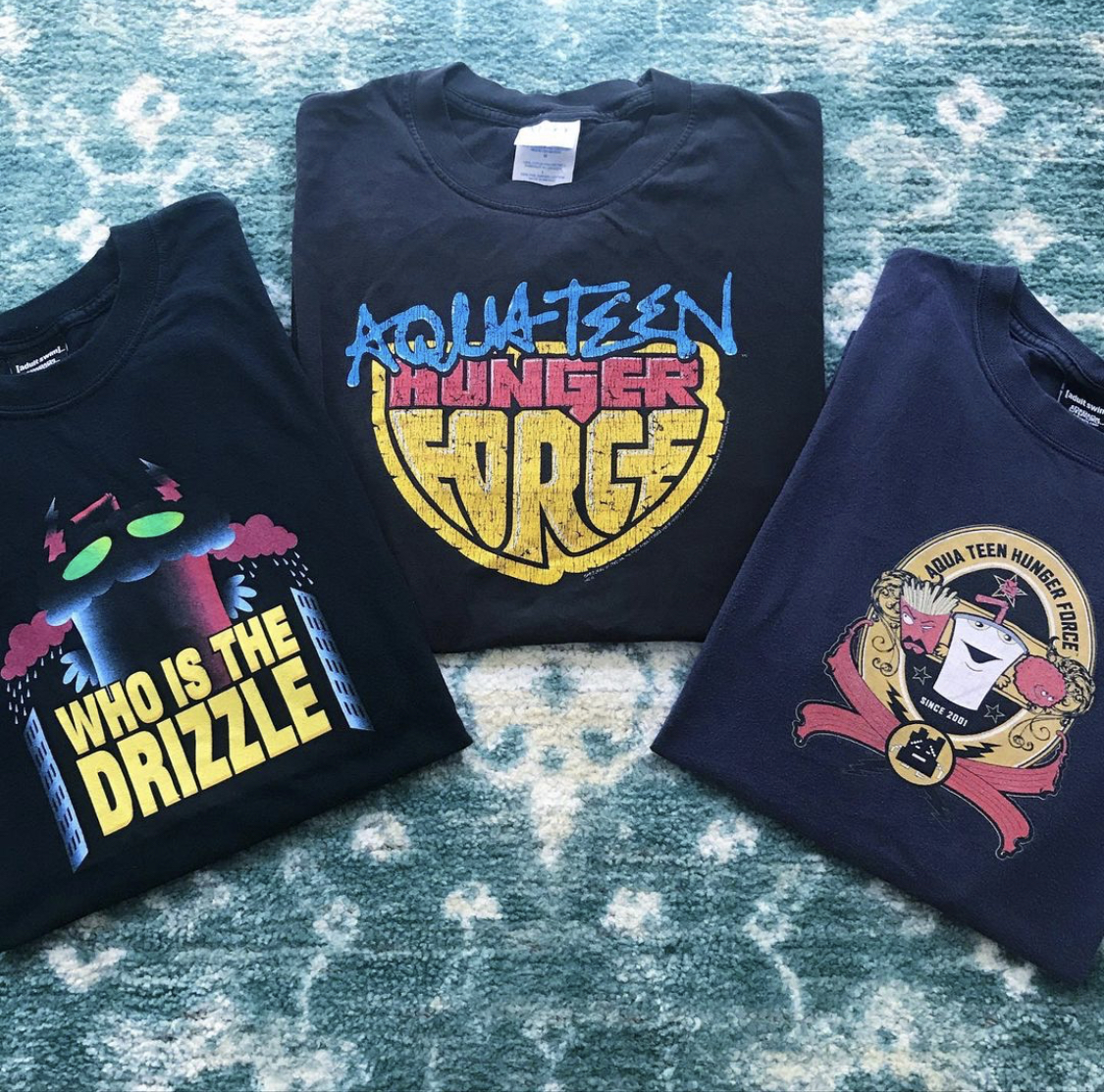 A trio of early ‘00s aqua teen hunger force tees on both the M&O and adult swim tags.

While the merchandise for AS was always quirky and continues to be that way, these shirts from the late-night block’s heyday really capture the fun had by both creators and fans alike. As far as vintage classification, some shirts of the later run wouldn’t qualify and certainly not the ones being printed today. But either way, the nostalgia of these properties is potent. When you walk down the street and are able to connect with someone over a shirt with an image of Zorak wearing a wig, there really is no better feeling.

An Interview With a Guy Who Collects Vintage Jesus T-Shirts, Religiously
Take Our Survey for a Chance To Win a Vintage Tee or 1 of 50 Gift Cards

[ LINK TO SURVEY IN BIO ] So what actually defines