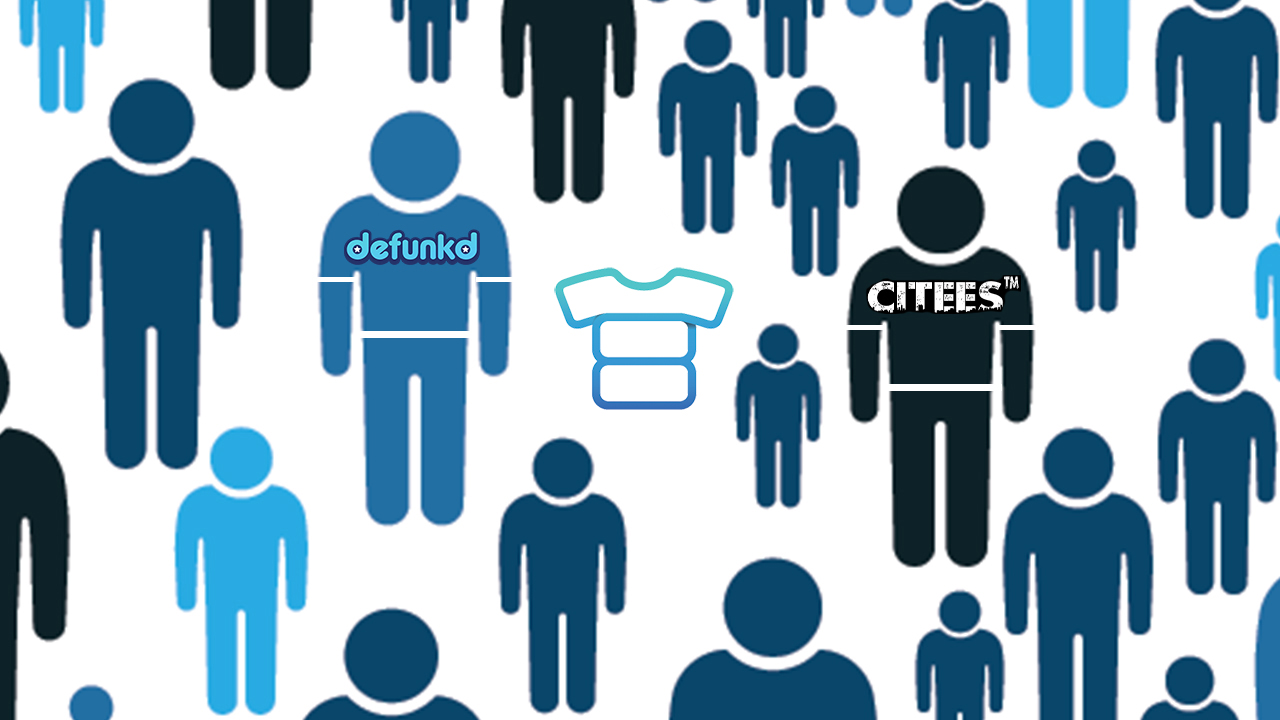 The survey was made up of 35 questions that were primarily multiple-choice, many included an open field, as well as several open-ended questions for participants to express their opinions.

540 “vintage t-shirt heads” participated between January 6 to January 31 and were given the opportunity to win one of two vintage t-shirts or 1 of 50 gift cards.

Defunkd and Citees conceived this survey to help tailor a forthcoming vintage t-shirt authentication app called Legiteem8. The survey was promoted through each company’s social network accounts, primarily through Instagram. Additionally, the survey got coverage on Defunkd.com as well as promotion through Defunkd’s customer email list of approximately 3500 subscribers.

Similar to a “sneakerhead” a “vintage t-shirt head” is a heavy user, wearer, or collector that has a significant portion of authentic vintage t-shirts in their wardrobe.

Of the 540 survey participants, just over 80% of them live in the U.S.A. The most popular cities include Los Angeles, Las Vegas, Mesa, and New York.

Canada registered in second place with 5%, and Toronto was by far the most popular Canadian city.

3.5% of the participants were residents of the U.K.,

2.5% from Malaysia, 2.2% from Australia along with a small representation from Indonesia and the Philippines.

The most popular two age brackets combined were 18-24 and 24-30 which accounted for almost 36% of respondents.

When asked as to what percent of their t-shirt wardrobe was vintage, respondents reported an average of 45% percent. Obviously, the vast majority of our respondents are vintage t-shirt wearers but over 56% of respondents also identified themselves as collectors.

When asked how many vintage t-shirts they owned that are NFS (not for sale) we learn how many dedicated collectors participated in this survey. Notably, 18% of them have 50 or more t-shirts that aren’t for sale.

How many vintage tees do you own that are NFS?

Nearly 30% of participants are vintage t-shirt vendors. Nearly 16% reported having at least 100 t-shirts currently for sale, with 7.65% reporting over 500, so we know we have an excellent cross-section of both casual, medium-sized, and full-time sellers.

Of the 382 respondents that entered a dollar amount when asked the value of their most expensive t-shirt, we get a collective value of nearly a quarter of a million dollars in t-shirts, $232,527.90 to be exact. We get a value of $608.71 as the average high price for a single t-shirt owned by participants. It’s important to note this figure is likely much higher because we had several instances of “priceless” and “a lot” entered instead of a dollar amount, which we omitted from the results.

54.66% of respondents indicated they have at least 1 t-shirt that is too valuable to wear, while over 8% have 10 or more they never wear due to their value.

How do our respondents appraise a vintage t-shirt? 64.27% reported using sold data from eBay listings. 40% claimed to use “gut instincts” to determine value, likely due to the numerous platforms that don’t make sales data available.

Vintage rock t-shirts are still king at around 40%, but movie tees have skyrocketed in recent years and now occupy the second most coveted category at nearly 15%. Rap tees have held steady at 13.46%, followed by sports at 10.65%.

Nearly 15% chose “other” and within that percentage, Anime was most commonly cited. 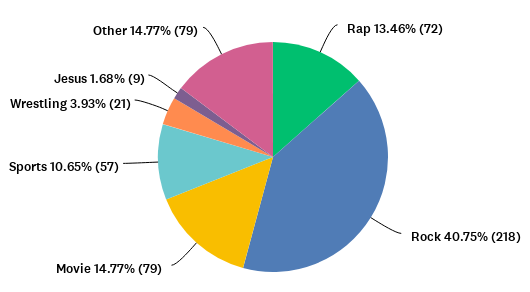 Where Vintage T-Shirts Are Purchased

eBay and thrift stores are the top places to purchase vintage t-shirts. In the last 6 months, 45.68% reported eBay, trumped only by purchases at thrift stores with 45.86%. Interestingly over 32% report buying via Instagram, from either a live auction or via DMs. 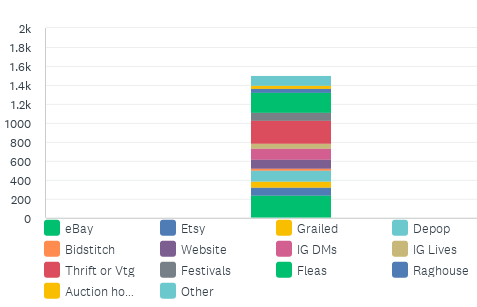 Where do you buy vintage t-shirts?

After all these years, eBay is still king among marketplaces as reported by 21.63% of participants. But the most popular selling method was actually Instagram at 25.05% reported sales through IG DM or live auctions. The three next most popular platforms were Depop 14.80%,  Grailed 8.92%,  and Etsy 8.35%.

Where do you sell vintage tees from? 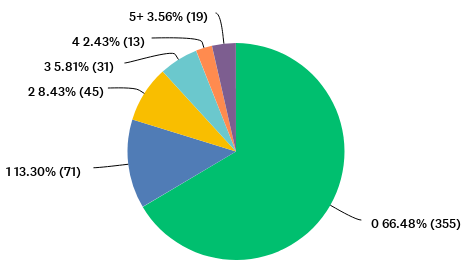 How many times have you purchased a dry rot tee in the last two years?

But even more interesting are the answers as to whether dry rot can be cured. Roughly 15% believe it can be cured. Over 37% felt it couldn’t. But the majority, 47.48%, admitted they are still unsure.

Fake vintage t-shirts, though, appear to be a legit problem in the community. 65.54% of respondents said they’ve been uncertain as to the authenticity of a vintage t-shirt. Nearly 30% of respondents reported having been sold at least one fake t-shirt recently and even worse, 23% of those who received a fake reported they weren’t always able to get a refund. Worse yet, almost 12% said they got no refund at all. 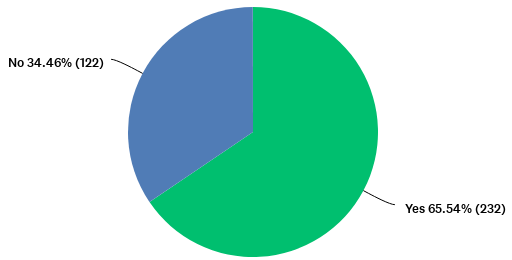 Have you ever been uncertain as to the authenticity of a vintage t-shirt?

When asked what the single best method to determine authenticity is, over 43% said they use the tag. The second method our respondents appeared to rely on was the copyright with 17.45% followed by stitching at 13.88%. 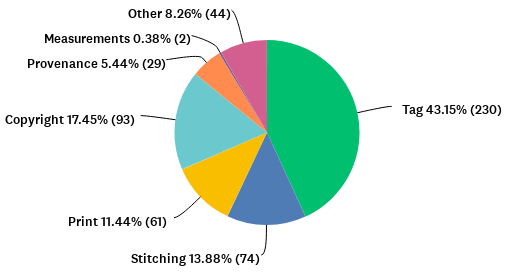 What factors do you use to determine if a t-shirt is authentic?

(Perhaps this is why the same people ended up with a fake t-shirt – as we’ve discussed in detail the copyright and stitching are completely unreliable factors, as can be the tag which sometimes one have one. Just over 11% selected a print analysis, which is actually the single best method to authenticate.)

For the most part, yes as over 33% say they wear them.

Only 13% thought they are bad for the community.

The favorite tag among our participants is Screen Stars, coming in at nearly 25% of the vote, followed by Hanes at just over 21%. Surprisingly, Gildan was next on the list at 10.34%. Liquid Blue got almost 8%. Fruit of the Loom, which wasn’t included as an option, was the clear favorite among those who inputted their own tag in the “other” field.

What is your favourite vintage t-shirt tag?

What Makes a T-Shirt “Vintage”?

Over 50% indicated that the t-shirt must be 20+ years older.

What defines a vintage t-shirt?

This is a polarizing question among the community, so we hoped to make some sense of it and we got some eye-opening results. The biggest factor in the definition according to almost 54% feel that limited prints are the biggest factor. Interestingly the condition of the t-shirt was the next most popular answer at over 42%.

Just over 20% felt that age was a factor, specifically 30 years old. 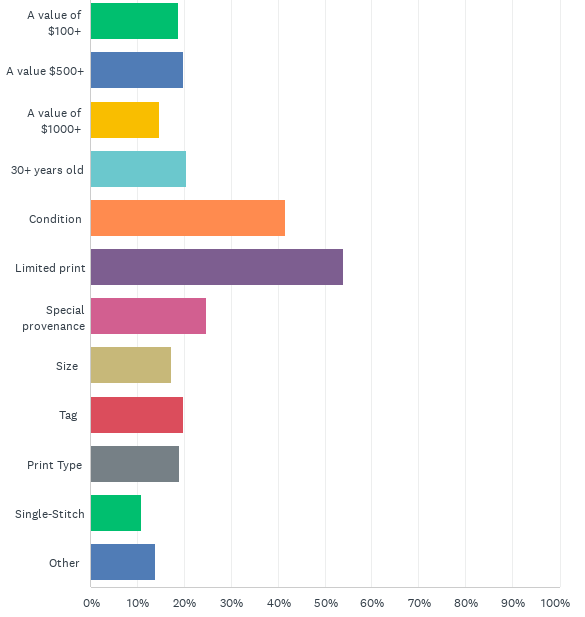 What factors influence your definition of a “grail”?

Most interestingly the most common response for ‘other’ participants said that there were personal and nostalgic factors. So we can ascertain that a “grail” can also be a personal declaration, that has meaning to the wearer rather than the community at large, and even regardless of value.

In terms of the most popular vintage t-shirt stain removal product, OxyClean, cleaned up. with nearly 46% of the vote. Spray ‘N Wash along with Shout came in second and third with just over 11 and 10% of the votes each. Interestingly the most common “other” responses were a tie between “baking soda” and “vanish” stain remover. 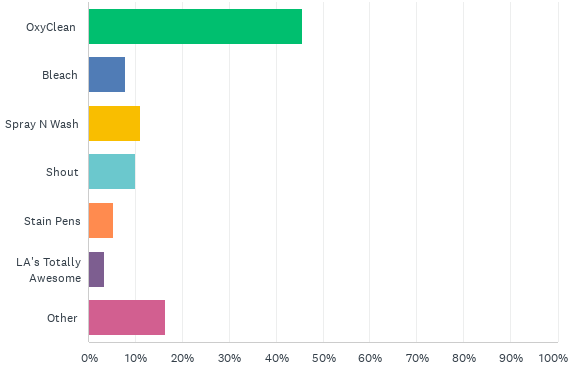 Crypto, NFTs, and the Blockchain

While there appears to be a lot of talk about what role the blockchain will have in terms of vintage t-shirts, only 13.7% have ever made a purchase with crypto. Even less, 12.41% have owned an NFT. Generally, on a scale of 0 to 100, participants’ knowledge of crypto and NFTs landed at only 26.

We asked respondents what vintage t-shirt related apps they use aside from social and marketplace ones, and the responses were quite limited. In fact, 44% indicated that they use “none.” The only standout was Gem, which was cited by 25 of the participants.

We’ve generated a word cloud based on the responses.  There’s a lot of passion in these responses. Respondents love the people, the connections, the memories, the nostalgia, and the t-shirts obviously. 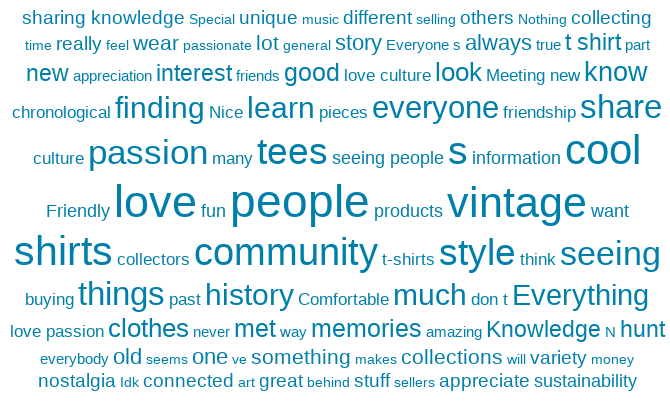 What do you like about the vintage t-shirt community?

It was nice to see that the respondents entered “nothing” in this field the most often, but we’re also able to see that fakes and scammers were also consistently cited. 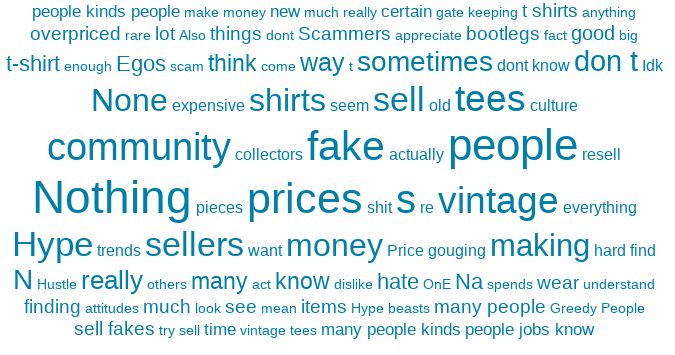 What do you dislike about the vintage community?

A big thanks to everyone who participated in our survey, and congrats to those who either won a t-shirt or a gift card!

‘Tee Till Death’ Lives!
Crypto News and What That Means For Vintage