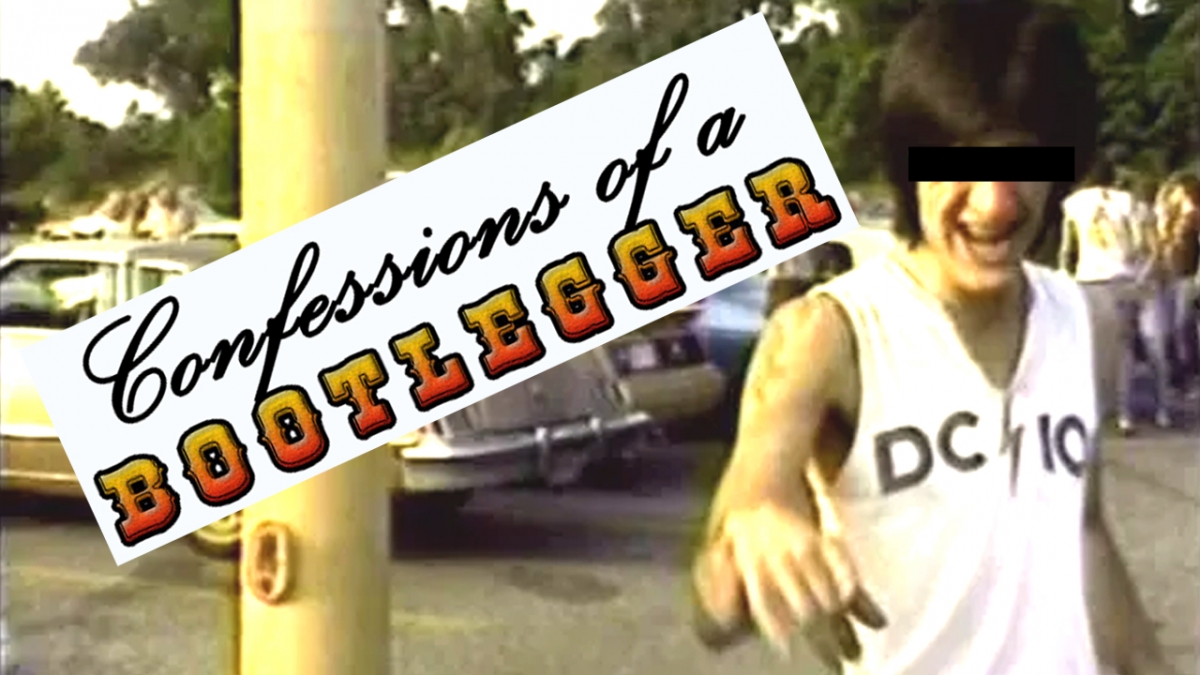 Meet Gary “X”. By the way – the suspicious-looking guy above isn’t him. He’s just some random vintage dude whose face we blackbar’d to make this article more cloak and dagger-like. The photo is fake but Gary and his pioneering career as a bootlegger are legit. He began bootlegging as a teenager back in the 70s. He traveled throughout the U.S. learning the ins and outs of the intellectual property piracy trade. He knew when to hold ’em, when to fold ’em, knew when to walk away and when to run. Regardless of whether or not the artists received financial compensation for this merch back then, today these tees are vintage, sought after, and their designs just as iconic.

How did you get involved in bootlegging concerts tees?

Long story, but I had two uncles that we’re peddlers in Chicago. This was the early to mid-1970s. Arena rock was just in its infancy. I started with one uncle going to Cincinnati to sell pennants, bats, team photo sets, etc. this was the time of the Big Red Machine and I was 13 or 14. From there my other uncle saw an opportunity and started selling imported shirts printed in the States.

One of the really big things then were festivals, or World Series of Rock with bands like AC/DC, Nugent, Journey, Eddie Money, and more playing at big stadiums like Cleveland Municipal, Riverfront, or Three Rivers. The toy would get 40 thousand or more in some of these shows.

What a strange world this was for me. There was still a little hangover from the 60s and the innocence was gone. Pot was the prevalent pastime and we were young, had cash in our pockets, and touring the USA. 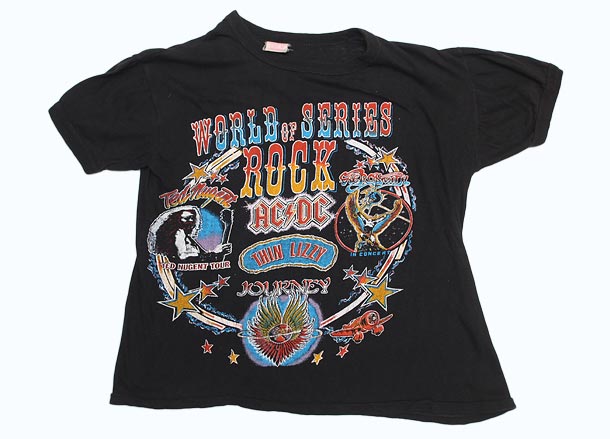 How long did you travel around making shirts?

Started selling as I said when I was 13. The first concert was I Think Mahogany Rush and Blue Oyster Cult in Dayton, Ohio. I did this from 14 ’til I was about 20. During this time frame, my uncle purchased a number of four-color turntable silk screen presses, hired an artwork guy named Danny, and was in the shirt manufacturing business.


We would start a road trip with our “crew” usually made up of 4-6 guys with a crew leader. The boss would choose the band, and we would set out on the road to wherever.

We would all travel in a big van, all packed in together, with all our stuff, shirts, and just go. The days ran together and truly were dazed and confused. We would hit the town early, scope out the stadium, get our shirts, and hit the street.

The two big parts of a show were the “come on” (time before the show starts) and the “blow-off” (end of the show.) These were the money times and in between was just kicking back, getting buzzed, playing liars poker or looking for girls.

Who made the designs of these shirts? Was it you?

No, I didn’t make the designs. At first, I had no idea where the shirts became from. Then as I said my Uncle and his brothers opened up a shop with silkscreen equipment, and a guy with long hair made the designs. You could get a buzz from the screenwash alone. We used to call in Brighto after a Three Stooges episode of the same name. The screen presses were flat turntables that rotated and was a 4 color press which was the minimum if you wanted good art. The shirt would get laid up, and the colors were applied one at a time. Then ran through a flat fried oven for the ink to cure.

What brands did you use?

I seem to remember a company called Screen Stars, occasionally Hanes “beefy t’s”, but mostly generic “made in Pakistan” shirts. These were shitty material, shrank on washing, and didn’t hold their shape well, but became the trademark of bootleggers. Plus they were always more affordable by far.

Were you mainly selling out of the parking lot?

Parking lots on the perimeter to the venue, good off-site walkways, subways, and anywhere the “heat” wouldn’t see us. Each City had its own peddler laws so sometimes it was wide open (just legal on the arena property) and other times you had to the and be invisible. The trick was to get as close as possible.

Did the promoters confiscate your tees to protect their b(r)and?


Yep, a few times. Once in Cleveland at a World Series of Rock event, we had guns pulled on us (by a dude claiming to be Ted Nugent’s brother) shirts and cash taken. We reported it to the cops, but no dice – they didn’t care.

We also got busted by cops too many times to mention. We got popped early in the day during the 1978 Rolling Stones Soldier Field show in Chicago. Then we all realized we had doobies on us in the paddy wagon. We didn’t want to hit the police station in “possession” so we smoked all of them. When the cops popped the doors a huge cloud of smoke hit them. What a look on their faces.

Any memorable events in the parking lot? Or after shows?

Too many. On a really good blowoff, you were surrounded by hundreds of people, wanting shirts and it was mayhem. You had to be totally aware of everything as stoners would always try to grab your cash or shirts. We carried mini baseball bats or blackjacks for protection. You learned to hold your cash in a certain way so it couldn’t be grabbed.

Also, people always wanted to negotiate, we traded weed, kisses, and more for shirts. Ha, what a hoot and time it was. No single event, but I do remember a Frank Sinatra show (yes we sold shirts there) at Riverfront Coliseum in Cincinnati. This was the place where the fans were trampled at a Who concert. Totally wealthy dudes and ladies pulling up in limos throwing fistfuls of dollars for made in Pakistan shirts. We sold out and made about $3-400 for one night of work. It didn’t get better than that, being a teen on the road, with cash in hand.

Do you have a secret stash (of tees)?

I used to. Damn, I sold them all for a buck apiece at yard sales many years ago. I wish I had held on to them first for sentimental reasons, and second, because I see you can make so much friggin money in them now – I have two kids in college!

What do you think about the value of old concert t-shirts now?

Honestly, I didn’t see it coming. If I did, I would have stockpiled and would now be retired.

It was a great learning experience, I have partied with Pete Townsend on Bourbon Street, seen almost every state in the USA, met thousands of great nameless, faceless people and these experiences helped shape me good or bad.

We were living a fun lifestyle, not harming anyone (except some promoters…slightly) and just there for the cash and party.