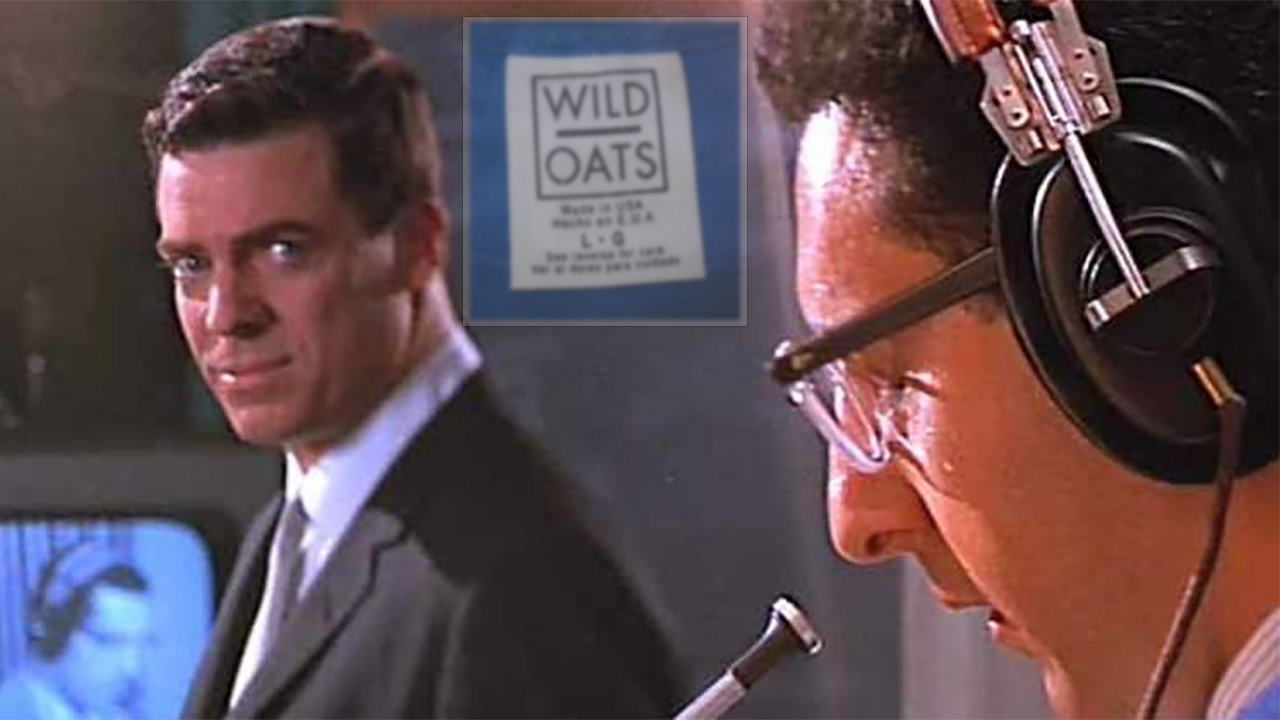 In preparation for the launch of our forthcoming vintage t-shirt authentication app, Legiteem8, we set out to determine authentication knowledge among the community. So we devised a quiz with 22 authenticity-related questions to put the community’s knowhow to the test. We also wanted to reward those who performed well with a badge bump, or two, within the app once it launches. Legiteem8 features a badge system that rates members’ performance over time, but we wanted to hit the ground running at launch – and pre-populate the app with users who are already savvy authenticators.

310 people participated. No one scored perfectly, but there were 3 participants that only got a single answer incorrect – scoring 94%. 44 people scored above 70% but we’ve definitely got some work to do considering the average score was only 55%.

Anyone who scored 60% or more will be contacted via email once the app launches and will be badge bumped according to their score.

This was not an easy test and it was especially tough if you decided to just wing it. Just before publishing the quiz we released “The Ultimate Guide to Vintage T-Shirt Authentication” and suggested that you cram before the exam. Participants scored the lowest while attempting to identify fake tags – given how much counterfeit tags have improved in recent years, this isn’t surprising. But they are nowhere near perfect and typically easy to identify when following the advice in our guide, researching known originals, and doing comparisons.

In this age, authenticating a vintage t-shirt takes time and research.

So without further ado, here are the main questions from the quiz followed by the answers underneath.

Which of these Tultex tags is fake?

51% of participants correctly answered this question. The first tag on the left is the forgery. The telltale sign is the faded nature of the black on the Tultex logo and black bar. The red on “COTTON” is also not as vibrant. Participants may have thought this tag was real, and just appeared faded due to washing. Well, good thinking, but all of the tags above are actually deadstock. But this isn’t the only issue with the first tag – compare it to the far right one – a true version of the exact tag design. What other issues can you spot? They aren’t identical by any means.

Which one of these Wild Oats tags is fake?

57% of participants got this one correct. In this instance, the middle tag is the forgery. The telltale sign here is how the tag is sewn in, where the top border isn’t visible. This is probably the result of the counterfeiters not getting the measurements of the tag correct – they didn’t leave enough white space above the Wild Oats branding and as a result, part of the image is hidden under the seam. But compare the first and second tags, which were meant to be identical. What other issues can you spot?

Which one of these Hanes tags is fake?

51% of participants got this one correct. This was a little trickier because all three tags are so vastly different. And each of these tags actually has variations that are legit. The first tag is the forgery. The main issue here is the size of each of the two tags, and spacing. See what you can spot when comparing it to the legit version below. 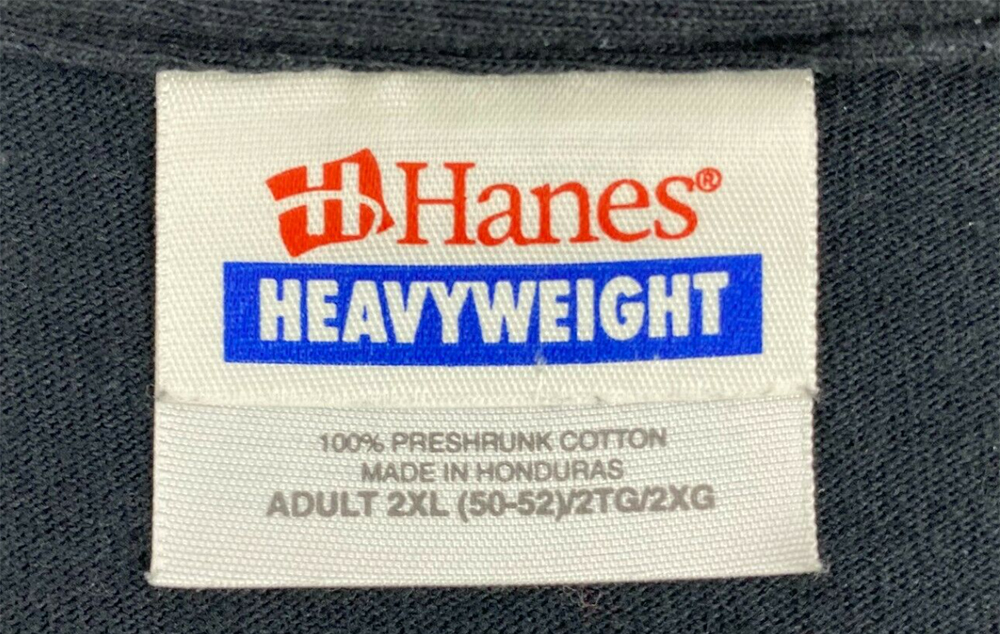 As previously mentioned, this is no longer something that can just be done without a direct comparison to a known original. Seek out a true version and compare. The Defunkd brand archives are an excellent resource since it was built by trusted vendors and existed before the modern era of fake tags.

Which one of these Liquid Blue tags is fake?

57% of participants got this one right. The far-right tag Liquid Blue is the forgery. When placed side-by-side with an original it becomes obvious the colors are off, the fake’s colors are too dark and the fabric weave within the colors is less obvious. Notice anything else?

Which one of these Anvil tags is fake?

Once we added an additional tag in the mix, only 27% correctly selected the second tag. 43% thought it was the first Anvil tag, but just because the tag seems unfamiliar, don’t assume it’s a culprit, get out there and find other instances. Now that you know the second one is fake, we’ll leave it to you to conclude why.

Which one of these various tags is fake?

Once we posed this question with four different tags, Screen Stars by Fruit of the Loom, Gem, Murina, and Gildan, all hell broke loose. Only 15% correctly identified the Gildan tag as fake. 47% of participants selected the Screen Stars tag. So what makes the Gildan one fake?

Visit our archives – there are three legit versions of it right here and you’ll see the forgery is pretty much a mess. The fonts are off, the alignment is off, and it has a number of other issues.

BTW, Legiteem8 has brand submission and search features, and over time, the community will build the world’s largest and most reliable brand database.

Which one of these RHCP prints is Fake?

Almost 80% indicated that the right RHCP t-shirt was fake. Bravo. You can see the loss in details and the wrong colors used on the right.

Which one is the fake Harley 3D Emblem print?

68% correctly identified the image on the right as being fake. Way to go. Most 3D Emblem prints are extremely tough to copy due to how detailed they are, check out a large comparison here. While doing this go out and find large images and scrutinize the details.

What can double-stitching tell you about a vintage t-shirt? 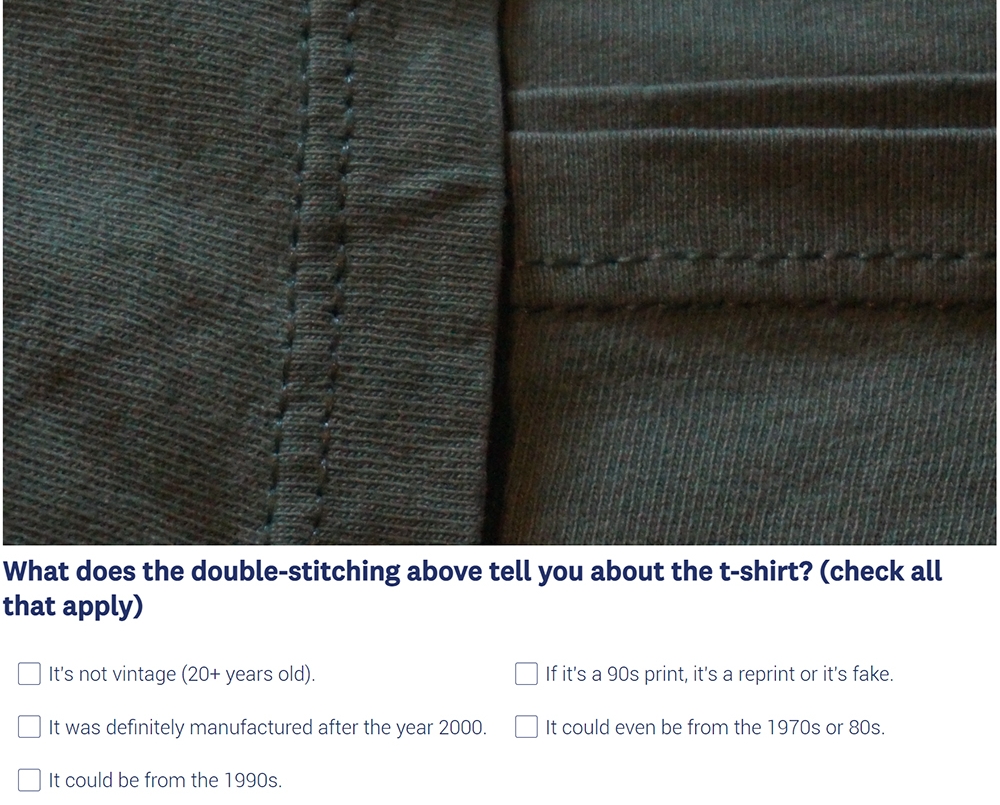 Two answers among the options were correct. 68% nailed “It could be from the 1990s.” 38% also chose the other correct answer “It could even be from the 1970s or 80s.” None of the other options are true of double-stitched tees.

Concerning though, is that 25% of respondents thought double-stitching meant “It was definitely manufactured after the year 2000.”

We devoted an entire piece to the misconceptions about stitching on tees, please go take a look.

What can a copyright date on a t-shirt tell you about it? 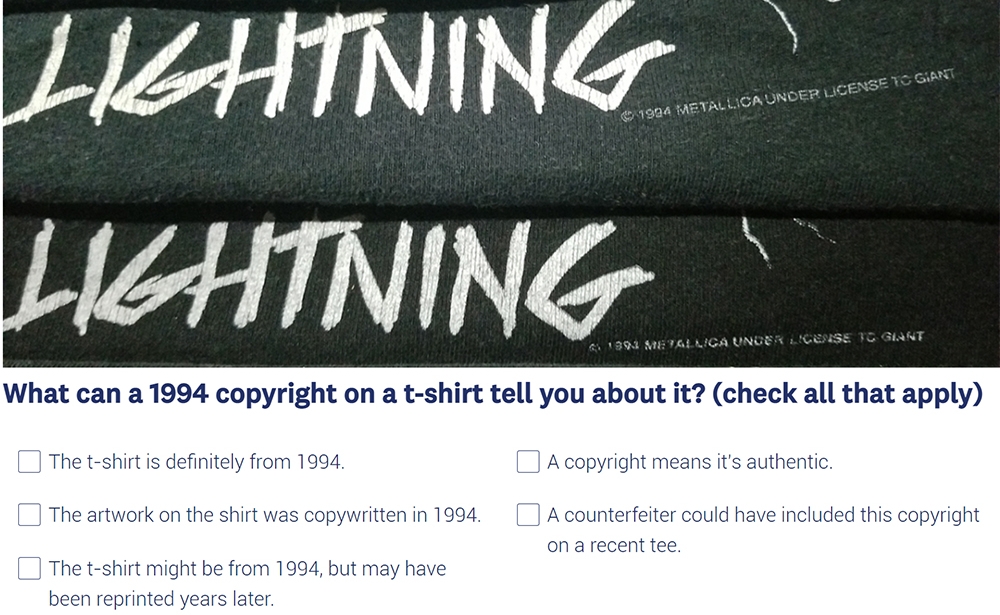 In this question, 3 of the answers were correct. 84% knew “The artwork on the shirt was copywritten in 1994.” 72% knew “The t-shirt might have been from 1994, but may have been reprinted years later.” And 63% were aware that “a counterfeiter could have included this copyright on a recent tee.”

Great results for this, but if you’re still looking to sharpen your copyright knowledge we wrote an entire guide to the pitfalls of dating a vintage t-shirt using the copyright.

What’s the single best method to ensure a t-shirt is vintage? 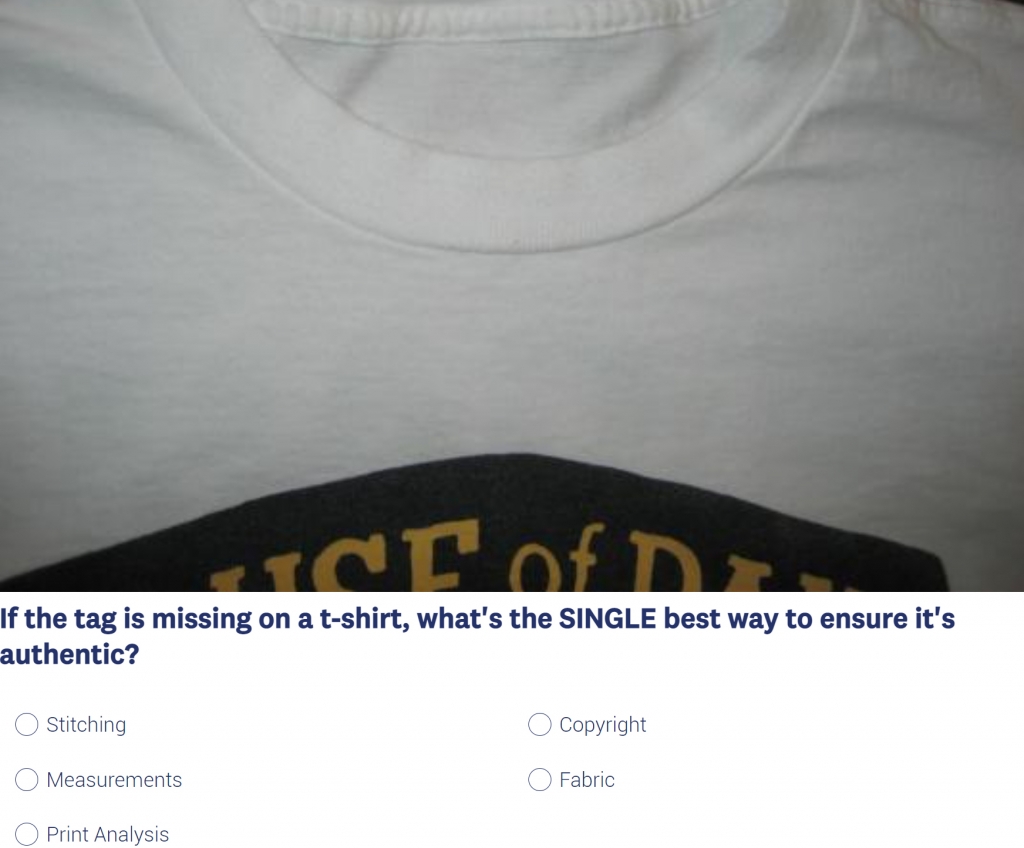 A tag is a great tool, but in the modern age of counterfeit tags, as well as the vast supply of deadstock vintage blanks, or in the absence of a tag – it makes the most sense to rely most on the print.

A whopping 27% indicated stitching was more useful than the print. Absolutely not!

How much is this Nirvana Heart-Shaped Box tee worth? 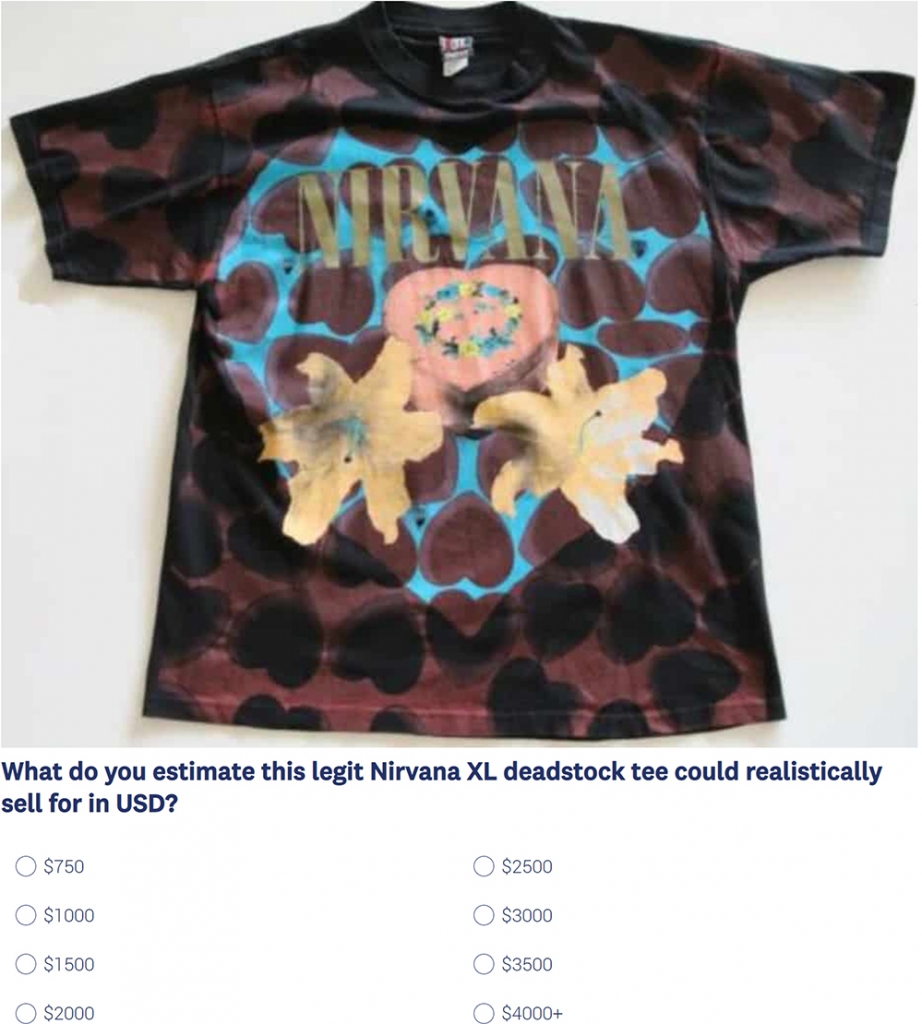 The answer for this was a bit trickier because this shirt has sold at a range of prices. The key takeaway from the question was the fact that it was XL and deadstock, so it would fetch more than lessor sizes in poorer conditions.

Respondents were given one point for selecting between $1000 to $2500. But an additional point was given if $1500 or $2000 were selected, which appear to be the sweet spot. To come up with these amounts we not only checked eBay’s recently completed auctions but we also used Worthpoint to paint a more broad picture of this shirt’s performance.

What was most concerning is that nearly 10% said $4000+, and appear to be basing their appraisal on a few sales that are clearly anomalies and/or current listing prices which are unrealistic. Remember to be aware that the highest amount a shirt has sold for and the price a vendor hopes to sell for – is not the same as what the shirt has consistently sold for.

As made evident by our list of the most expensive Nirvana tees, the highest these shirts have ever sold for doesn’t mean that’s their true value.

Be sure to check our extensive guide on vintage t-shirt appraisal.

Thanks for participating and standby for the launch of Legiteem8!