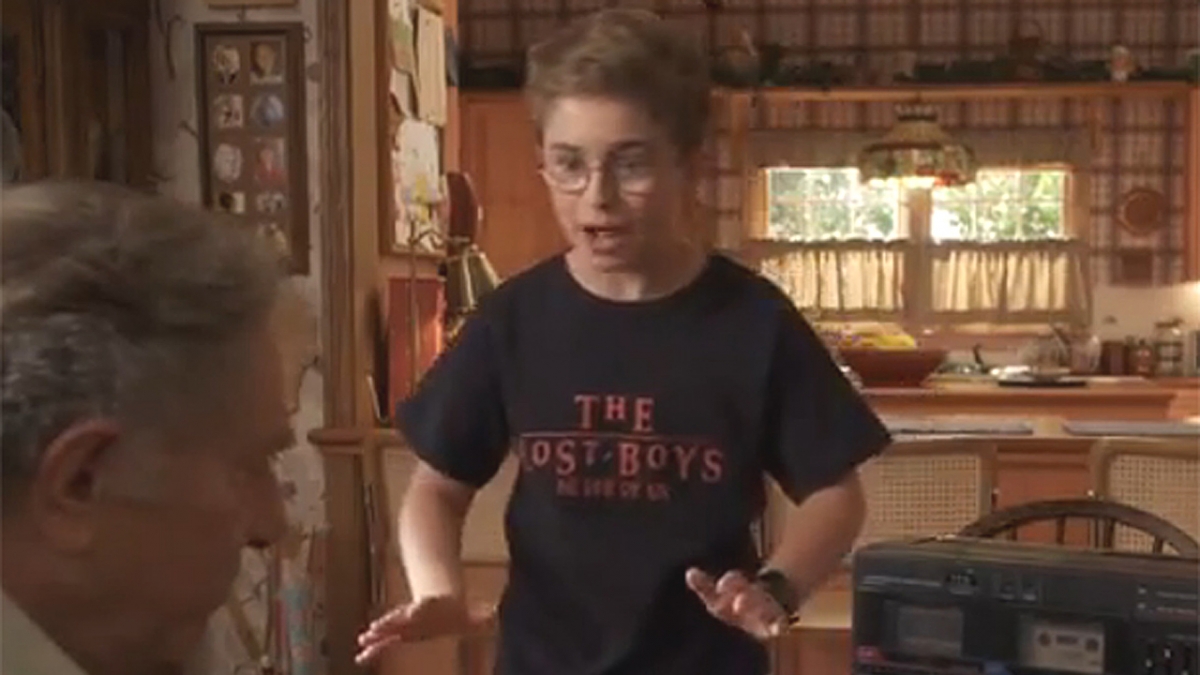 The Goldbergs have returned! Back in May I geeked out and watched every episode from the first season and documented which vintage t-shirts make cameos. Well, I’m turning this into a weekly report…

But sadly, I don’t have much to report t-shirt wise from the first episode. It didn’t feature much if any true vintage tees (with prints.) Our gut says that Lost Boys tee above is not true vintage. But thankfully the show has so much retro eye candy, nostalgic flashbacks, and laughs that we have found it in our hearts to forgive.

Besides, I’ve heard rumblings from several sellers in our community that the costume designer has been very active in their shops. And at the request of the show’s creator, Defunkd helped track down an impossible-to-find tee from a private collector in Japan. I also just got word that the shirt was cleared and already worn in an episode! I won’t ruin the surprise, but needless to say, it will be the coolest cameo yet and there might even be an entire episode based around this band. So rest assured there’s lots of poly-cotton eye candy coming in future episodes…

Now back to our regularly scheduled episode: Love is a Mixtape.

Ahhh the long-lost art of the Mixtape. This show reminded me of how much went into creating a one. When it was extra special I’d shell out a little more loot for a chrome tape, if for no other reason than not wanting it to be “normal.” For 60 or 90 minutes I got to play DJ by carefully plotting out my track selection. This all had to be done in painstaking real-time by queuing up songs from other tapes and then patiently waiting while each one was recorded onto your masterpiece.

When it was finally done, it was time to seal the deal by breaking the small plastic tabs on each side of the top of the tape. This advanced technology prevented someone from recording over it. Hey, accidents happen. But thankfully if I ever got desperate to reuse the tape, the feature could be thwarted with a tiny piece of scotch tape.

Then came naming the mix and designing tape case…several more hours could be invested depending on how creative you wanted to get. Should I list the tracks included or keep it a secret so the listener is not sure what to expect and the music speaks for itself? So many choices. And it was all so rewarding once it was finally done.

What do kids of today have? A memory stick. They drag and drop the MP3 files (they obtained with one click) with no concern for recording time restraints. They can put together 90 minutes of music in mere minutes. That doesn’t even make sense. They’ll never know the stress of a player eating a favorite tape and the joy of resuscitating it by carefully inserting a Bic pen into the spool. They’ll never understand the technological breakthrough that was “auto-reverse.”

Yes, memory sticks are a huge convenience. But on the flip-side, they won’t be a part of memories that stick.

Shazbot!
The Heartbreaking Story Behind Barry’s Beastie Boys T-Shirt In The Goldbergs