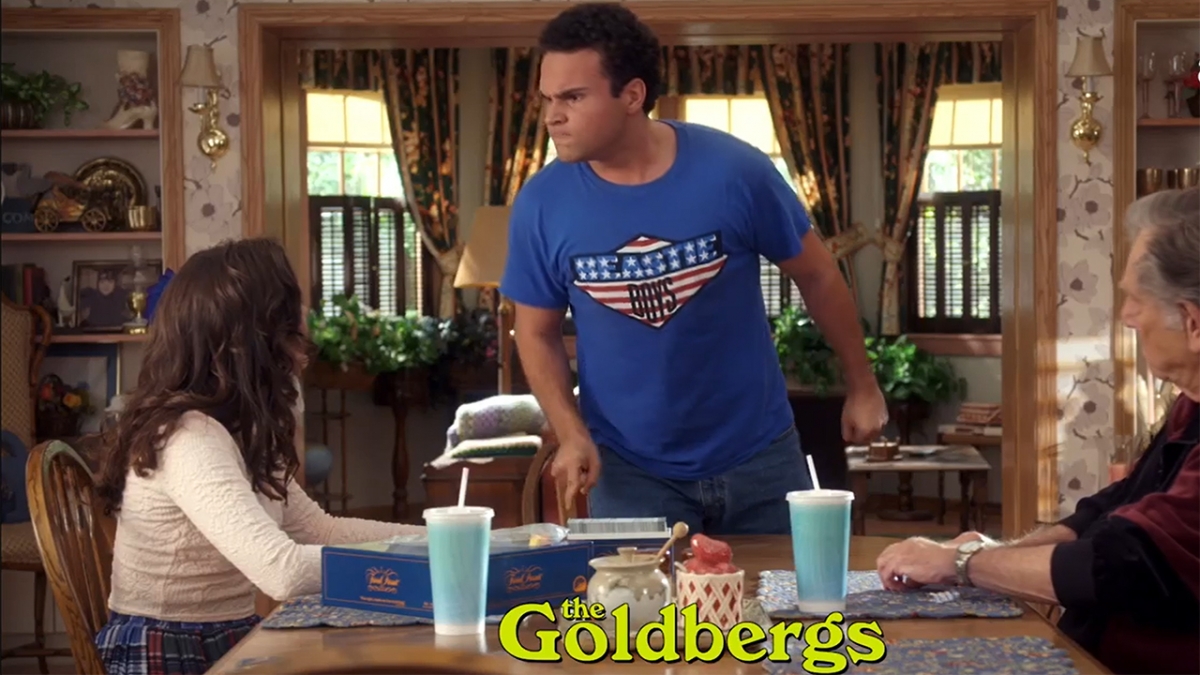 [VINTAGE TEE COLLECTOR TRIGGER WARNING AHEAD] Back in 2014 I put together a complete guide to the vintage tees in season one of The Goldbergs. Yes, I am a madman who carefully documented all of the t-shirts that appeared in all 23 episodes of the first season. Many of them were true vintage, so I respected the effort put in by the show to stay true to the era. The guide was even well-received by Adam Goldberg, the show’s creator.

@defunkd And this is the my dream shirt for the show. I wore it for YEARS... http://t.co/JetfddNpkO

But he also had a request. Turns out the Beastie Boys tee he was referring to is nearly impossible to find in a size that would fit Barry, so it was a tall order. But we like to make vintage t-shirt dreams come true.  So we asked our friends from all over the globe if they had one stashed away. Finally, one appeared in Japan, tracked down via our Instagram friend ttnn1988vintage. (I must say, collectors from Japan are the OG rap tee collectors)

Anywho, I got the tee in my hot little hands and then got in contact with the show’s costume designer to arrange delivery. The sale price you ask? $0. The tee and size are on the rare side and I had also traded TWO t-shirts for it so I wanted it back in the Defunkd vault at some point. Yes, I am a madman who agreed to loan the tee to a popular TV show backed by a large studio with millions of dollars, out of the kindness of my little heart.

Not long after the tee appeared on Barry in the episode called Big Baby Ball and it was all worthwhile.

Flashback to the ‘80s TONIGHT with the 😃 “Big Baby Ball” 😃 episode of THE GOLDBERGS!

Soon after, the costume department contacted us to return the t-shirt and I happily provided all of my shipping info. Both parties had some confusion over how to declare the value of the item for customs since it was going from the US to Canada. I didn’t want to be on the hook for duty charges, given I wasn’t buying the shirt or making any money from it. We mutually decided to mark the value as $0 and felt secure that it would be safe given FedEx was delivering it.

Not once in my entire life had a delivery from FedEx gone missing.

I’m sure you can see where this story is headed.

I checked the tracking details often and it seemed to be in limbo. Panic set in. I contacted FedEx and they opened an investigation. That investigation led nowhere. After a few weeks, “Inspector Clouseau” declared that the box had mysteriously vanished. When I suggested that it had been stolen he was offended. “Why would you think that?” he said, offering no other plausible explanation for its disappearance.

The worst part? Since we had declared the value as $0 FedEx wasn’t on the hook for any coverage. They did, however, reimburse the shipping fees to the studio. So generous.

The studio felt terrible about it. Adam personally reached out to apologize, despite it clearly not being their fault. They were also very fair when they compensated me for the shirt.

But I would still rather have the t-shirt.

It will forever be the one that got away.

Love is a Mixtape
The Life & Tees of DJ AM