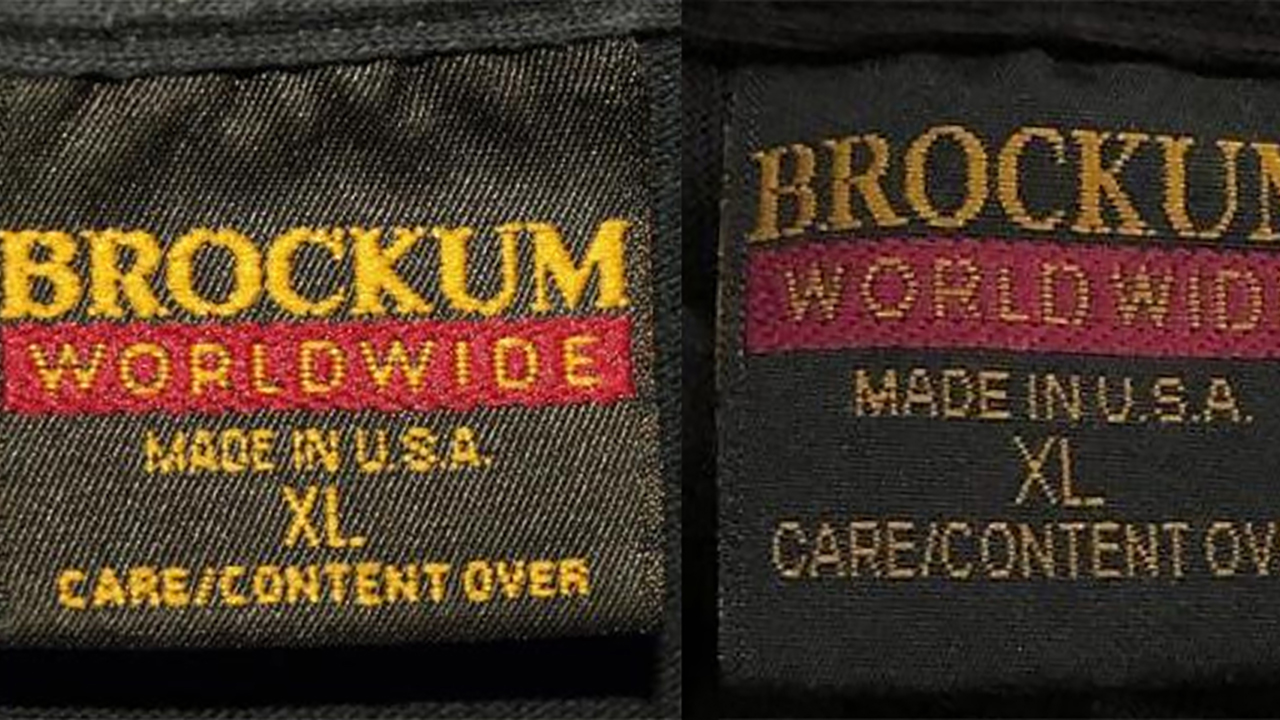 The tag is one of your best allies in the vintage t-shirt authentication arena. It’s a stronger authenticity signal than single-stitching and a copyright combined, but authentication via the tag should always be done in conjunction with an analysis of the print. We’ll explain why below.

We have seen counterfeiters attempting to pass of t-shirts with genuine vintage tags installed from other shirts. It is, however, not very common – because it’s tough to do, seamlessly, pun intended. In most of the instances, I’ve seen it was super obvious – the seams are off – the tag is crooked, and there’s evidence the original tag was extracted and replaced. So it’s not a method that is used often because it ends up being counterproductive for the counterfeiter.

If they do manage to pull it off convincingly, you can bet whatever shirt the tag is being sewn into will likely not have the same measurements as the original shirt. So if you find a t-shirt with a 1982 Screen Stars Funky A tag, sized M, but the chest measurement is 21″ – well, that is outside of the Screen Stars sizing from that era and a huge red flag.

To complicate matters – there are sewn-in tags that happen for legit reasons. These are done after the shirt is manufactured, officially, by the tag owner. A lot of brands didn’t produce their own t-shirts – Brockum often used FOTL blanks and had their label sewn in at the time of manufacture. Sometimes though, for a variety of reasons, they would print on other blanks and didn’t have the ability to have the tag installed during production. In these instances, they still wanted their branding attached to the t-shirt so they would often have a tag sewn in after in a more rudimentary fashion – usually attached above the fabric that the tag is typically fastened under. I’ve also seen it done on the collar area. Sometimes they would remove the original blank tag, sometimes they didn’t, because it had the size printed on it, and the sewn-in tag was generic.

Giant was doing this into the aughts. 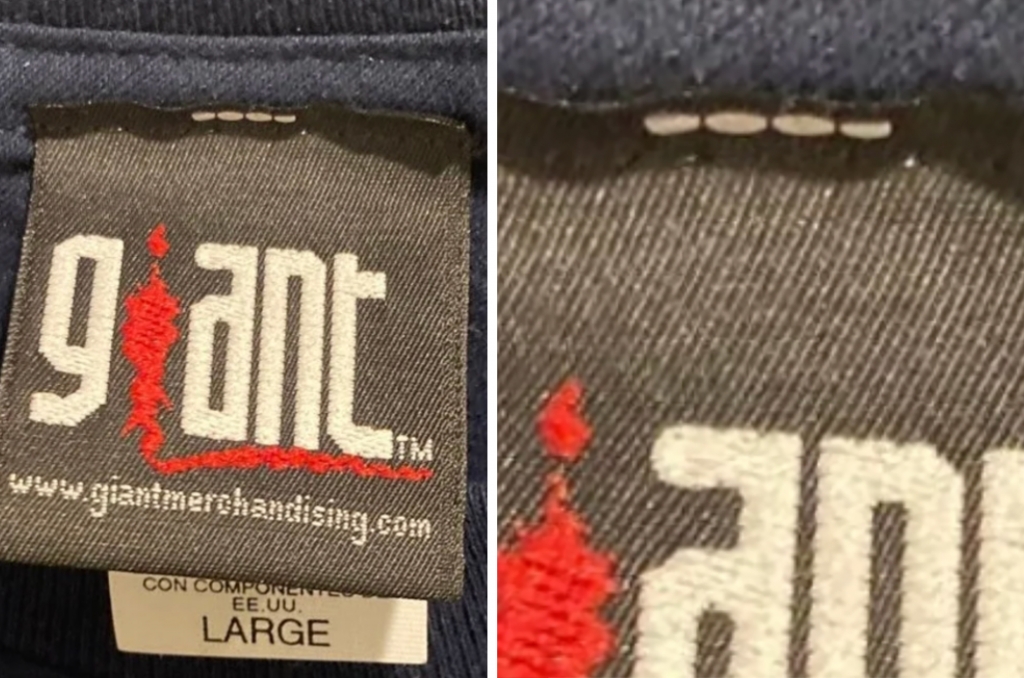 As early as the 1970s, some budget t-shirt manufacturers would sew their tags in this same manner, probably to save money. In the instance of the infamous Fantasy Pakistan tags, their tees didn’t have any extra bells and whistles, like a nice piece of fabric below the inside collar they could nearly tuck a tag under. So they just put a stitch right over the top edge of the tag.

About a decade ago the vintage t-shirt community had a healthy discussion in our forum trying to figure out what the explanation for sewn-in tags was. A number of us, including myself, initially felt that there was something fishy going on. I have since changed my tune on this.

Sewn-in tags are vintage t-shirt cannon. But be aware that counterfeiters use this technique too, it’s just easier than attempting to meddle with installing the tag under the fabric, they’ll sew it over top like in the example above.

Blank deadstock tees still often pop up from the 80s, so you can bet your ass they’re still floating around in mass quantities from the 90s and beyond. Genuine vintage blanks are a counterfeiter’s best friend because they know the community puts a lot of weight on a tag to authenticate a shirt. A simple one-color design printed on a blank vintage t-shirt is among the toughest to authenticate. Counterfeiters have also been known to print on used vintage blanks and undershirts because the worn nature of the tee and tag lend credibility to its authenticity.

While forged tags are nothing new, it’s only recently that they became pretty convincing and widespread. Early attempts at fake tags were somewhat laughable. Over ten years ago we first spotted some fake Screen Stars tags from Thailand. 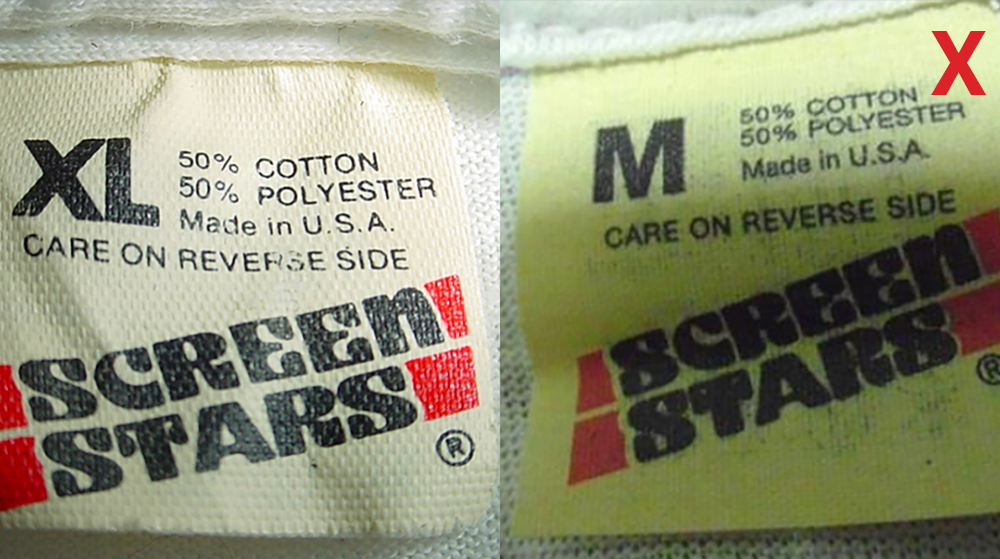 Then about 6 years ago some fake 3D Emblem tags emerged. 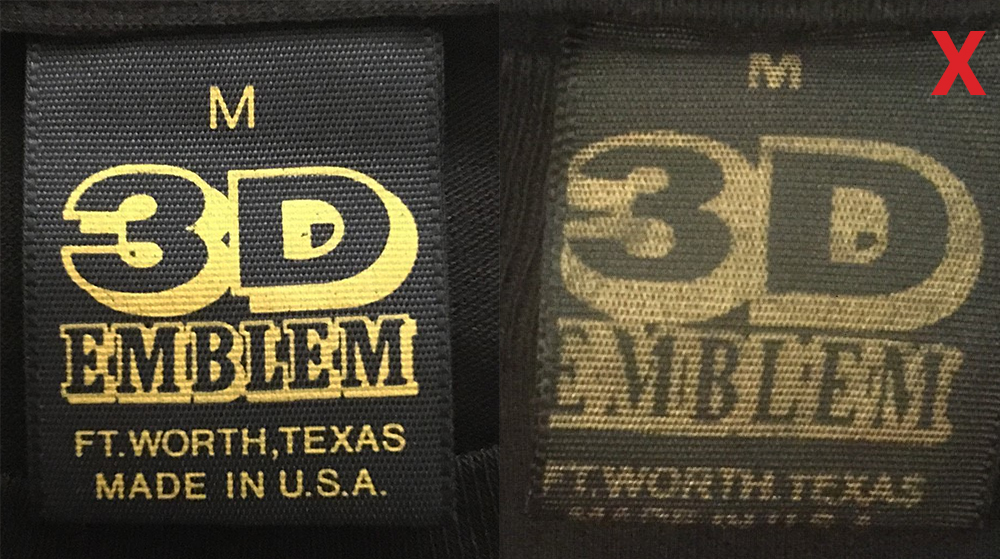 Both of these are examples of printed tags – where the branding is printed on a piece of material. In the Screen Stars example, the forgery looks to be on a solid piece of material rather than interlaced fibers. The fake 3D got this detail right, but failed royally in terms of the print accuracy.

But the problem is more widespread and diverse now, woven tags, once believed to be too complicated to replicate are in the counterfeiting crosshairs.

How to Authenticate a T-Shirt Using the Tag

Fake tags didn’t used to be a threat because they were never very convincing. But recent versions require side-by-side comparisons and examination to identify. So they should be approached with the same methodology as examining a print on a t-shirt. Compare the tag in question with a known original. The great thing about bootleggers is they don’t pay attention to the finer details.

Here are a few examples of modern counterfeit tags.

As you can see none of the fonts are a great match. The fake’s fonts are all taller and thinner. You’ll also notice on the genuine tag the fonts all appear lower on the tag and it’s also apparent the tags aren’t the same size. The colors also aren’t a great match but some of this can be explained by the photography. 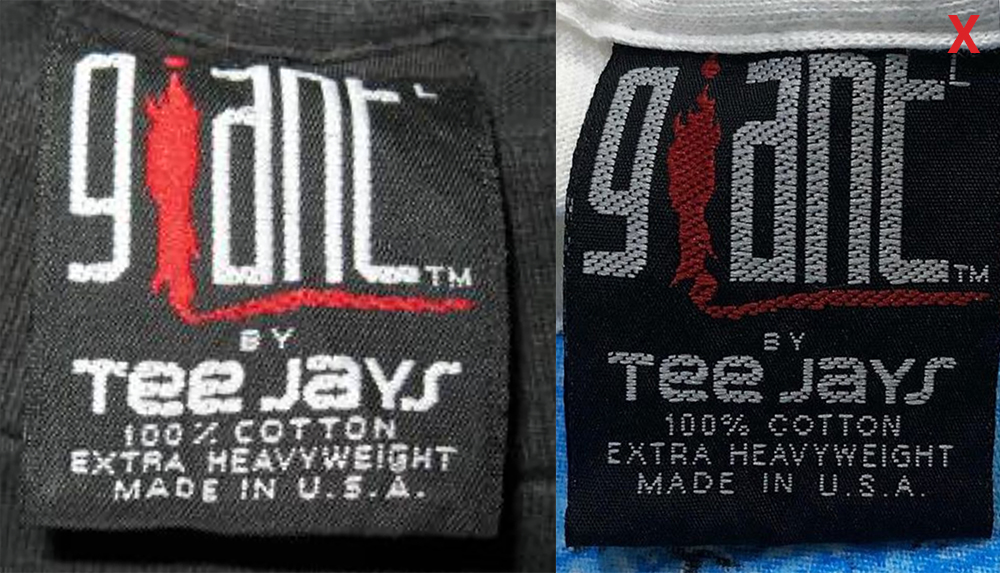 In this instance, the counterfeiters did slightly better matching up the fonts, the tag size and the positioning of the details on the tag. But you can see the legitimate one is clearly using a higher thread count evidenced by the spotty nature of the threading on the forgery. Also, note the difference in the “%” signs. What other details can you spot?

Keep in mind, once you’ve done this, you have only authenticated the tag and but not the print.

The existence of vintage blanks, convincing counterfeit tags, and tags sewn make relying heavily on the tag a huge misstep. My advice while authenticating a vintage t-shirt is to focus on the print, it is the hardest part for counterfeiters to get accurate, and in the event the print is on a genuine vintage blank, or the tag is missing – it’s the only tool you have left in your toolbox.

Take Our Survey for a Chance To Win a Vintage Tee or 1 of 50 Gift Cards
‘Tee Till Death’ Lives!