I finally managed to get my hands on all the vintage t-shirt books published in the last few years. Truth be told, I would recommend any book that contains photos of vintage tees, even if it was scribed in crayon by a two year old child. 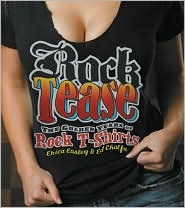 Meet the authors: Erica Easley graduated from Colombia University, worked at Warner Brothers, created ads at J. Walter Thompson and devoted much of her life to being a clotheshorse. Ed Chalfa owns a Portland’s largest and most celebrated resale shop, the Red Light Clothing Exchange. His collection of vintage rock t-shirts is worth over $30,000.

I admit the first thing I do when I pick up any vintage t-shirt book is furiously flip through it, taking in all the glorious photos, and this book was no exception. Over 200 of them, and plenty amazing designs even the vintage aficionado has never seen before.

Spectacular t-shirts aside, I found this particular vintage t-shirt book to be the most conservatively written amongst the bunch. It reads somewhat like a school text book or a university paper on the subject, which is kind of ironic given the creative subject matter, and, well, it’s cover.

The introduction is way too long. Although it contains lots of great information, I labored through it, always tempted to skip forward and start gazing at the tees again, or even stare at the cover one more time. Some of the shirt analysis feels a little too interpretive, almost like the authors felt as though they had to come up with something insightful about every design. I’m pretty sure they put way more thought in to some of these designs than the bootleggers did.

And if I had to waiver a guess, most of these comments were probably written more by Erica Easley than Ed Chalfa. Case in point – one of the comments written about an Iron Maiden tie dye shirt refers to their mascot as a “tweaked corpse with guns ablaze”. While a very good point is made about the rarity of a Maiden tie die, to Maiden fans, and most fans of vintage t-shirts, that “tweaked corpse” has a name. It’s Eddie and he’s the most iconic rock t-shirt mascot that has ever lived, and is well deserving of a book of his own. Not knowing this is a little bit of a rock tee faux pas, especially in a book devoted to the subject. Something tells me Ed Chalfa, possessing over $30,000 worth of rock shirts, and sharing the same name, is probably on a first name basis with Eddie.

The book does feature the most impressive amount of bootlegs designs of any of the books, which are just as much a part of rock tee history as the ones with copyrights on them. One of the bootlegs includes a shocking Ozzy Osbourne jersey with KKK imagery and a very good point is made regarding one of the downsides of bootlegging.

I recommend adding this book to your library.

The Art of the Band T-Shirt by Amber Easby