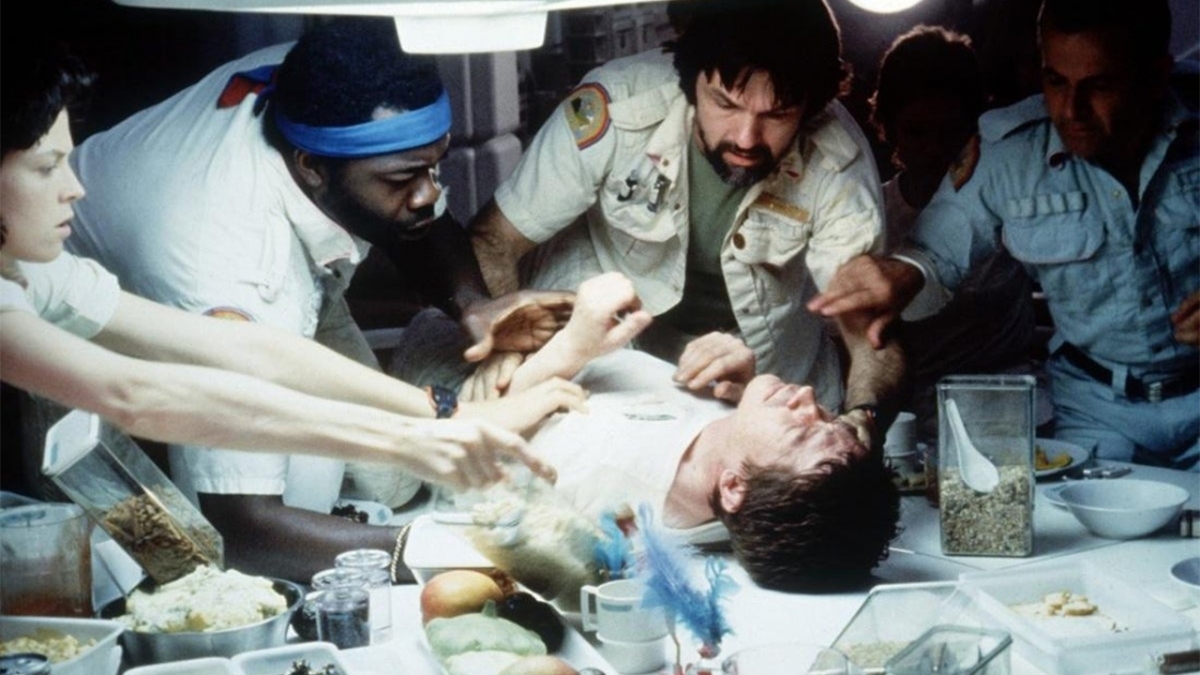 My Vintage T-Shirt is a section written by our readers. Thanks to Peter over at monomurraymulcher for sharing this shirt and great story. If you have a rare vintage t-shirt and a great story please contact us.

My chest burster 3-D Alien t-shirt was one of those treasures of youth that was too special to be worn most of the time.  Shooting out from the middle of the chest is an exquisitely detailed rubber replica of the worm-like monster which pops out of the chest of character Kane (played by John Hurt) during dinner.  A notoriously disgusting horror moment and one of the few truly graphic horror moments of any blockbuster film of the era.  With the exception of Night of The Living Dead (1968) and Dawn of the Dead (1978), few mega-hit films featured gore this graphic.  Such splatter was generally consigned only to low-budget horror and grindhouse films.  Alien changed the cinematic landscape entirely in this regard, ushering in a grotesque Grand Guignol era in Hollywood film which has never really abated.

In 1979, images such as this would still truly shock audiences; I fondly remember screenings in my teenage years where far more visceral reactions happened among audience members than would ever happen in today’s desensitized pop culture landscape.  My friend Chris bolted from his seat to vomit when the little boy on the raft gets eaten by the shark in Jaws (1975); multiple seat-fleeings during a hugely attended screening of Night of the Living Dead, with people literally running up the aisles;  and of course, the constant talk on the bus about the “chest-burster” from Alien.

So when I saw this t-shirt for sale at a local collectors’ store in 1983, I knew I had to have it.  The price tag was appallingly steep for the time – $20, if I remember right – and I had to save up for a while to get it.  Pleasurable days ensued as I wore it to various horror film premieres and the occasional pizza slice eatery, much to the chagrin of fellow diners and staff.

My most memorable wearing of this shirt, however, was to the 1986 opening of Aliens, the first sequel.  We went to a matinee at the magnificent Grand Lake theater across town, and afterward, we became memorably stuck at a standstill in a traffic jam in my 1964 Dodge Dart.  We were parked in the middle of Interstate 880 on the former “Cypress Freeway,” on the lower deck of a split-level road that would later become infamously remembered as the “Cypress Structure”.  Three years later it collapsed in the 1989 Loma Prieta earthquake, completely pancaking one deck atop the other, squashing rush-hour motorists to the height of a postage stamp in some cases.  Somewhere, there is a photo of me behind the wheel of my Dart, wearing this shirt, taken from my friend standing outside the car.  Three years later, 42-odd people would be dead at this very spot.